12 New Books We Recommend This Week 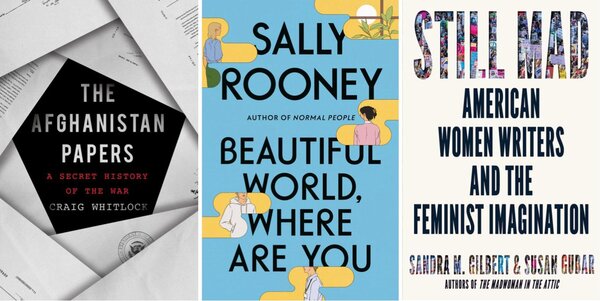 War and its aftermath figure prominently in our recommended titles this week, from Andrew Bacevich’s critique of American foreign policy (“After the Apocalypse”) to two books about the 20-year fight in Afghanistan (Carter Malkasian’s “The American War in Afghanistan” and Craig Whitlock’s “The Afghanistan Papers”) to Robert S. Levine’s study of Andrew Johnson’s role in the immediate wake of the Civil War (“The Failed Promise”). Meanwhile, Algeria’s war for independence from France provides the backdrop to Leila Slimani’s new novel, “In the Country of Others” — it’s subtitled “War, War, War” — which is based on her grandmother’s experiences during that conflict.

THE MAGICIAN, by Colm Toibin. (Scribner, $28.) This is Toibin’s second novel to dramatize the life of a major novelist (“The Master,” from 2004, was about Henry James in the last years of the 19th century). “The Magician” is about Thomas Mann, the Nobel Prize-winning German author of “The Magic Mountain” and “Death in Venice,” among other works. Mann’s long and permanent exile from Germany began in 1933, after Hitler came to power, when Mann fled to Switzerland along with Katia, his Jewish wife. When World War II erupted six years later, the Manns escaped to the United States, first to Princeton and then to Los Angeles. Toibin’s novel is “symphonic and moving,” our reviewer Dwight Garner writes. “Toibin seeks to grasp the entirety of Mann’s life and times, the way a biographer might, and he does so quite neatly. Maximalist in scope but intimate in feeling, ‘The Magician’ never feels dutiful. Like its subject, it’s somber, yet it’s also prickly and strange, sometimes all at once.”

THE FAILED PROMISE: Reconstruction, Frederick Douglass, and the Impeachment of Andrew Johnson, by Robert S. Levine. (Norton, $26.95.) Andrew Johnson, having assumed the highest office after Lincoln’s assassination in 1865, wasn’t only an accidental president but also a racist one — about that, Levine says, there cannot be any doubt. But as Levine points out in his new book about Reconstruction and Johnson’s eventual impeachment, a number of Black leaders and Radical Republicans were in fact hopeful that Johnson would prove to be a more ardent defender of Black people’s rights than Lincoln himself. “Unlike other volumes on Johnson’s impeachment, which focus mainly on the Radical Republicans who wanted him removed from office, ‘The Failed Promise’ looks closely at the perspective of Frederick Douglass and other Black leaders,” our reviewer Jennifer Szalai writes.

BEAUTIFUL WORLD, WHERE ARE YOU, by Sally Rooney. (Farrar, Straus & Giroux, $28.) This third novel by Rooney, after “Conversations With Friends” and “Normal People,” is about four characters, first among them Alice Kelleher, a clear stand-in for the author. It features spirited inquiries into timely social, political subjects, but Rooney’s fiction to this point remains philosophically anchored in the realms of friendship and romance. “In all three of her novels, Rooney writes directly, convincingly, hotly about sex,” our reviewer John Williams writes. “Much of the power in these scenes — and the talkier ones — arises from their riskiness. Impassioned, intellectual 20-somethings discussing their vexed feelings for one another is a road made mostly of potholes. Rooney avoids almost all of them.”

THE AMERICAN WAR IN AFGHANISTAN: A History, by Carter Malkasian. (Oxford University, $34.95.) A former civilian adviser in Afghanistan and aide to the Joint Chiefs of Staff, Malkasian has written a broad-reaching, authoritative history of America’s longest war from 9/11 to the near-present, including knowledgeable details on the Afghan part of the story. “Could it have gone differently?” Fredrik Logevall asks in his review, which considers Malkasian’s book alongside Craig Whitlock’s on the same topic (below). “Malkasian, the more sanguine of the two, identifies some missed opportunities to limit the bloodshed and cut back U.S. involvement, but concludes that Afghanistan was always destined to be a long and difficult slog, ‘something to be endured.’”

THE AFGHANISTAN PAPERS: A Secret History of the War, by Craig Whitlock. (Simon & Schuster, $30.) Whitlock, a Washington Post reporter, takes us behind the scenes to describe how America’s military and political leaders across three administrations engaged in what he calls an “unspoken conspiracy to mask the truth” about the failures in Afghanistan. “Even as American planners acknowledged — behind closed doors — that they were losing in Afghanistan, they kept up the bullish public pronouncements,” Fredrik Logevall writes in his dual review of Whitlock’s book and Carter Malkasian’s (above). “‘Lies and Spin,’ Whitlock titles a particularly devastating chapter, as he quotes general after general declaring to reporters that the trend lines pointed in the right direction, that the enemy was on the ropes, that victory would soon come. Never mind the plethora of intelligence assessments showing the opposite.”

MRS. MARCH, by Virginia Feito. (Liveright, $26.) This debut novel, a witty psychological thriller in the style of Patricia Highsmith and Margaret Millar, features a cowed, increasingly unstable Upper East Side housewife who is convinced that her novelist husband has mercilessly skewered her in his latest book. “The final pages are shocking,” Christine Mangan writes in her review, “and readers may find themselves tempted to return to the beginning in order to understand just what Feito has so convincingly managed to achieve.”

IN THE COUNTRY OF OTHERS: Volume One: War, War, War, by Leila Slimani. Translated by Sam Taylor. (Penguin Books, $26.) Loosely based on the life of Slimani’s maternal grandmother, this novel (the first of a planned trilogy) lays bare women’s intimate, lacerating experience of war and its consequent trauma. “Mathilde’s journey in ‘In the Country of Others’ is a rite of passage as much through language and motherhood as through war,” Meena Kandasamy writes in her review. “Slimani writes motherhood like no one else, and Mathilde’s subtle ambivalence toward that role is no exception.”

STILL MAD: American Women Writers and the Feminist Imagination, by Sandra M. Gilbert and Susan Gubar. (Norton, $27.95.) Four decades after “The Madwoman in the Attic,” their influential work of feminist literary scholarship, Gilbert and Gubar have produced a sequel, tracing expressions of anxiety, anger and desire in an array of recent women writers — from Audre Lorde and Adrienne Rich to Claudia Rankine and Maggie Nelson. Our reviewer, Katie Roiphe, calls the book “an excellent resource for anyone seeking a spirited guide through the past few decades of feminist history. One can feel the sensibilities of these two pioneering scholars — humane, fair, impassioned, well intentioned — hovering over the page.”

PUBLIC CITIZENS: The Attack on Big Government and the Remaking of American Liberalism, by Paul Sabin. (Norton, $26.95.) This is a thoughtful, careful account of how the adversarial liberalism of the late 1960s, as embodied by Ralph Nader, replaced New Deal liberalism and opened the door for Ronald Reagan’s antigovernment conservatism. The book is “an elegantly argued and meticulously documented attempt to place Nader within the liberal tradition,” Timothy Noah writes in his review.

WHAT YOU CAN SEE FROM HERE, by Mariana Leky. Translated by Tess Lewis. (Farrar, Straus & Giroux, $27.) In a German village at the end of the Cold War, a grandmother’s recurring dreams foretell her neighbors’ deaths. This whimsical novel draws from folklore — particularly the Brothers Grimm, with their refreshing acceptance of darkness. “There is a satisfying spark to her short, declarative sentences,” Katherine Hill writes in her review. “They induce reflection, and maybe even learning, like the folk tales and Buddhist koans that inform her work.”

BREATHE, by Joyce Carol Oates. (Ecco, $28.99.) In Oates’s new novel, set in a dreamlike New Mexico, a writer faces the shock of grief after her husband is stricken with a terminal illness. With minimal back story and swift-moving prose, the author paints an urgent, often surreal portrait of mourning. “‘Breathe’ is a fever dream of a novel, and it’s as an allegory of grief that it most sparkles,” Joshua Henkin writes in his review. It “is also a moving meditation on grief time, where there is no beginning, no end, and ‘each hour, each day, passes with excruciating slowness yet it is all happening very quickly.’”

AFTER THE APOCALYPSE: America’s Role in a World Transformed, by Andrew Bacevich. (Metropolitan, $26.99.) Bacevich’s critique of American foreign policy over the past decades targets the notion of “American exceptionalism” and the dissonance between the windy rhetoric of the country’s political leaders and the harsh realities of the world. “The military-industrial complex longs to build ever more fantastical (and fantastically expensive) weapons systems with no obvious purpose,” Geoffrey Wheatcroft notes in his review. “As Bacevich says, that might be a better place to start defunding than with the police. … One can only hope that Bacevich is read and understood by a generation young enough to see through and reject those dismal elites.”