Home » Books » A Sweeping History of What We Eat

A Sweeping History of What We Eat ANIMAL, VEGETABLE, JUNK
A History of Food, From Sustainable to Suicidal
By Mark Bittman

Mark Bittman’s latest book arrives at a momentous time. In the opening weeks of his term, President Biden has not only rejoined the Paris climate accord, announced new emissions reduction targets, and canceled permits to build the Keystone XL pipeline and drill in the Arctic National Wildlife Refuge, but also made climate change an essential consideration in foreign policy and national security, directed federal agencies to invest in communities of color that are bearing the brunt of climate change, and promised to address the impact of this crisis on immigration and the economy.

But there is at least one area where Biden’s climate critics remain skeptical: his approach to reforming the food system. Tom Vilsack, the nominee to head the Department of Agriculture, is not just a holdover from the era of Barack Obama but a Clinton-style, pro-corporate moderate. Vilsack has promised to tap the U.S.D.A.’s Commodity Credit Corporation to encourage sustainable and climate-conscious growing methods, but he has said little about how he plans to convince farmers and ranchers in threadbare and dying rural communities that now is the time for big change.

Just recognizing the awe-inspiring scale of the problem has persuaded most writers to take on some narrower slice and go deep. But Bittman clearly relishes the mad ambition of his undertaking (“perhaps too ambitious,” he says in a sly aside, “you’ll be the judge of that”), often buoying the reader across waves of information with the sheer momentum of his narrative. If it feels a bit breathless at first, Bittman settles into his story soon enough, delivering a clear and compelling compendium of modern agriculture. 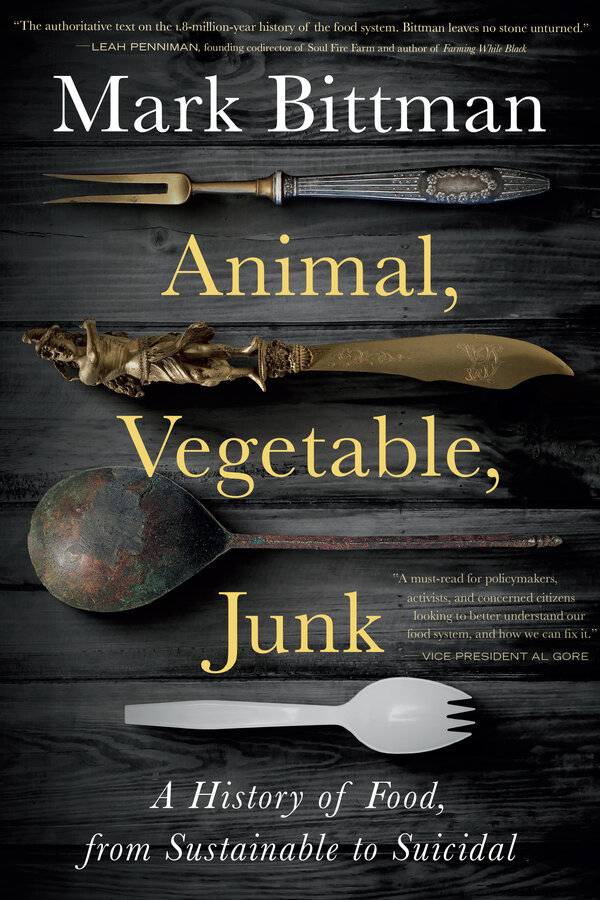 In particular, his rendering of the early mechanization of the American farm is epic and engrossing. We feel swept up in the promise and possibility of all that new technology, so much so that the turn from agriculture to agribusiness, though we know it’s coming, still delivers a crushing blow. “It wasn’t an entirely cynical process, and some might even call it an innocent one,” Bittman writes, but “intended or not, the tragic result of the push to standardized monoculture was that scientists and researchers became allied not with farmers but with bankers, equipment manufacturers, and sellers of seeds and chemicals.”

This is a keen insight — and it points to what may be Bittman’s greatest strength. He doesn’t lapse into the polemic of some policy wonks who too often want to make every error seem foreseeable or the product of some unforgivable flaw. His careful delineation of the difference between the ignorant and ruthlessly statist food policies of Joseph Stalin and the American-style “laissez-faire attitude toward unchecked corporatization,” for example, is extremely welcome. Likewise, he recognizes that the development of canned food and later fast food was an outgrowth of the increasing importance of women in the workplace after World War II and the large numbers of middle- and upper-class women who were, for the first time, “doing the majority of domestic labor themselves.”

These nuances not only allow us to approach policy issues with more complexity, they also temper our moral certainty. By the time Bittman reaches his final section, simply titled “Change,” he has earned the right to damn the evident flaws of our system. He has the wisdom not to dwell on the shortsighted ambition that brought us here but rather to offer an equally evenhanded assessment of several failed attempts to undo our errors. “Humans’ impact on the environment is often unintentional and unforeseen,” Bittman writes, “but we must still recognize it and act accordingly.” In the end, he arrives at a place that may be familiar to readers of Michael Pollan’s “The Omnivore’s Dilemma,” Raj Patel’s “Stuffed and Starved” or Tom Philpott’s recent “Perilous Bounty” — that the only solution is to focus on sustainability.

Still, I’m freshly persuaded by Bittman’s framing. The food system, he notes, isn’t broken. In fact, it works almost perfectly for large seed and chemical companies, and it “also works well enough for around a third of the world’s people, for whom food simply appears, to be eaten at will.” But that means that change will be resisted by those with the most power and will be inconvenient for the majority of Americans too.

So it’s going to require some poetry in the early stages of mobilizing the public, and then, it’s going to require an equal measure of bold and sure-footed action. As Bittman clearly shows, we don’t have the luxury of making well-meaning missteps or settling for half-measures. The time for big change is now.