Home » Books » A Trump Memoir Would Sell. Will Publishers Buy It?

A Trump Memoir Would Sell. Will Publishers Buy It?

When American presidents leave office, regardless of their parties or approval ratings, a common ritual awaits: They write books, capturing the moment for history and sharing insight into one of the world’s most unusual jobs.

But publishers are at odds over such a project with President Trump, even though his presidential memoir would likely sell millions of copies. It is a debate that pits powerful commercial interests against fraught political and cultural fault lines, with some executives worried that signing him would prompt a revolt among their authors and staff, and that ensuring the book’s veracity could be an even bigger concern.

“I would take a meeting,” said Dana Canedy, the senior vice president and publisher of Simon & Schuster’s namesake imprint. “But there’s a huge gap between taking a meeting and publishing a book.”

Concentrated in New York City, mainstream book publishing is dominated by editors, agents, publicists and other professionals who are politically left of center, but the big houses all sign books by conservatives, seeing it as key to their mission and their business.

Sean Hannity is at Simon & Schuster. Sarah Huckabee Sanders is at Macmillan. Newt Gingrich has been published by divisions of Penguin Random House, Hachette and Macmillan.

Mr. Trump has published more than a dozen books with houses that include Simon & Schuster, HarperCollins and Penguin Random House, though some titles have sold more than others. According to NPD BookScan, “Trump: The Best Golf Advice I Ever Received” has sold about 3,500 copies through traditional retail channels, like Amazon or big-box stores, since it came out 15 years ago. “The Art of the Deal” has sold more than 630,000 copies.

Sales and profits this time around stand to be huge. Mr. Trump was defeated in the 2020 election but still has a megaphone on social media and holds sway with many conservative media outlets, which will give him a platform to promote his book even when he is out of office. More than 73 million people voted for him this year.

But the risks this time are different, too. Several top executives said that publishing Mr. Trump could be perilous in a polarized media environment — to a degree that is far different from his books released before he became president — and that the possibilities of boycotts, libel lawsuits and social media campaigns outweighed the obvious financial benefits. Earlier this year, Hachette dropped a planned memoir by Woody Allen following protests by its employees and Mr. Allen’s son Ronan Farrow, an author who is also published by a Hachette imprint.

Others noted that publishers would face credibility issues if they released a book by a public figure known for spreading falsehoods and misinformation. Publishers, who typically rely on authors for fact-checking and accuracy, would likely need to take additional steps to verify that Mr. Trump’s account was factual and that he would be willing to undergo that kind of review. And if the factual and legal vetting did not eventually satisfy the publisher, would they be able to claw back whatever portion of the advance had already been paid?

“I’d have to be satisfied that he met Simon & Schuster’s overall standards for publishing a book, which is that book be honest, fair and balanced,” Ms. Canedy said. “We’d want to know that he would be willing to be edited and submit to a rigorous fact-checking process.”

Speculation about Mr. Trump’s plans for his memoir — which he has hinted at in the past — began picking up in the days after the election. Though he does not yet appear to be actively shopping one, his finances are under stress and he could be looking for the type of cash infusion a book might bring.

Most of the president’s businesses are losing money, according to an investigation by The New York Times, which obtained two decades of his corporate and personal tax information. These tax records also show he has hundreds of millions of dollars in debt coming due in the next few years that he has personally guaranteed. He is also under audit by the Internal Revenue Service. This audit has been going on for years and an adverse ruling could cost him more than $100 million. 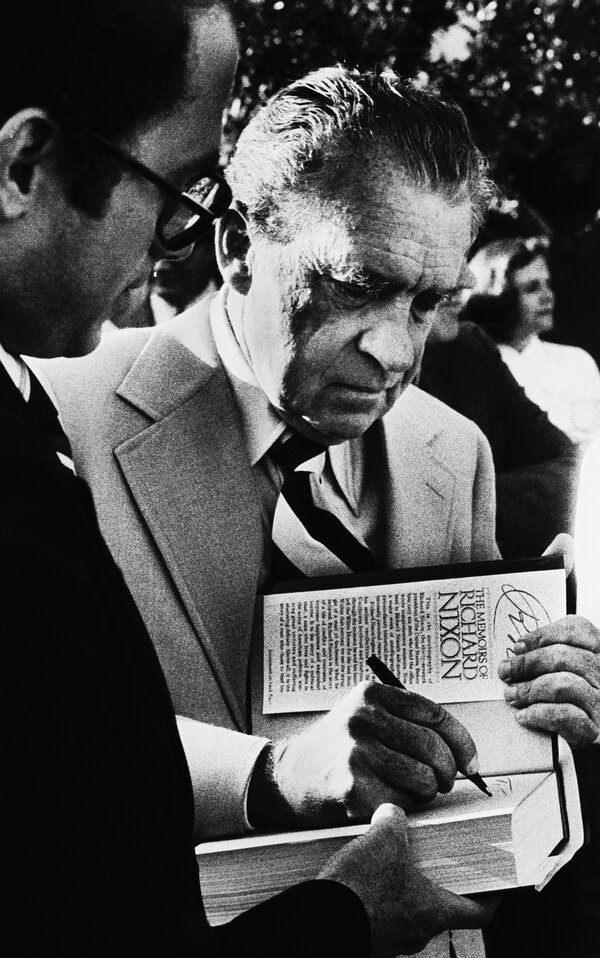 Presidential memoirs have long been a popular and lucrative subgenre. Such books have a built-in audience and are generally reliable moneymakers. Even Richard Nixon found a publisher for his 1978 memoir, “RN,” despite a boycott effort.

But blowback from within the industry to a Trump memoir, especially as he refuses to concede that he lost the election, is likely to be severe.

Celeste Ng, the author of the best-selling novel “Little Fires Everywhere,” said she wouldn’t hesitate to speak out against her publisher, Penguin Random House, if it struck a deal with Mr. Trump.

“We have every reason to believe a Trump memoir would be primarily misinformation, ungrounded opinions and flat-out lies,” she said in an email. “Don’t pay him to do it and don’t give him the legitimacy of a contract with a major publishing house. If you’re going to set yourself up as a gatekeeper, you have a responsibility for what goes through your gate.”

Some prominent writers who have been outspoken critics of the president said they would not object if a publisher took on the project. Stephen King, who has frequently denounced Mr. Trump on Twitter, said in an email that Mr. Trump should be given the opportunity to release his book, as a matter of principle.

“Anything he wrote would be a pack of self-serving lies, but I believe in the freedom of people to read what they want, and I hate censorship,” said Mr. King, who is one of Simon & Schuster’s top-selling authors. “Let him publish, if he wants. I hope my publisher won’t be the one to do it, but in any case I can’t wait to see the critics take him apart.”

Literary agents were also divided on whether the industry should embrace Mr. Trump. Esther Newberg, co-head of ICM Partners’ publishing division, said that while she hoped none of the major houses would buy Mr. Trump’s book, she could not afford to stop doing business with them if they did. But, she said, she represents authors she expects would take their work elsewhere.

Brooks Sherman, an agent with Janklow & Nesbit, said on Twitter that he would stop submitting books to any publisher that took on a Trump memoir. “I promise, I will never sell another book to a publisher that dares do this,” he wrote.

Other agents said agencies and publishers should be open to releasing a memoir by Mr. Trump, depending on the nature of the book.

Keith Urbahn and Matt Latimer, who co-founded the Javelin literary agency and have represented several former Trump administration officials, said they would take a meeting with Mr. Trump but acknowledged how difficult it would be to find the book a home.

“It’s going to be an extraordinarily hard time to sell the Donald Trump memoir,” Mr. Urbahn said. “While not entirely insurmountable, this is the thorniest nonfiction publishing challenge that I’ve ever seen.”

Thomas Spence, the president of the conservative publisher Regnery, which has worked with Mr. Trump before, said he would be eager to buy the president’s memoir, but he doubted that the big five publishers would ultimately refuse such a big seller.

“I’m hoping they will stand by their principles and not get involved,” he joked, “so we have a better chance of picking it up!”

Another possibility is that Mr. Trump could self-publish a book and bypass the houses entirely. That would mean taking on printing, distribution and other logistical headaches along with financial risk, since self-published authors forgo an advance in exchange for a much higher percentage of sales. But given the number of books Mr. Trump is likely to sell, retaining complete control of a book’s content and message is likely to be an appealing proposition.

His son Donald Trump Jr. released his first book with the Hachette imprint Center Street but self-published a new one this fall called “Liberal Privilege: Joe Biden and the Democrats’ Defense of the Indefensible.” It has sold just 12,000 copies through traditional retail channels, according to NPD BookScan, which is significantly less than his first book. It’s not clear how many he has sold in other places, like through his website.

But with his finances strained, will Mr. Trump want the guaranteed cash infusion, much of it upfront, that a publisher can provide? George W. Bush reportedly received an advance of a $7 million for his 2010 memoir, “Decision Points.” Bill Clinton sold his autobiography, “My Life,” to Knopf for around $15 million. Most recently, Barack and Michelle Obama received some $65 million from Penguin Random House for their books. Mr. Obama’s memoir, “A Promised Land,” which Crown released this week, is already shaping up to be a blockbuster, with a global first printing of nearly six million copies.

An article in The New York Post last week, citing an unnamed source, said Mr. Trump could be offered book and TV deals worth $100 million, but publishing professionals said that number was almost certainly too high for a book.

“Unless he plans to write the Bible, I don’t think that’s accurate,” said the best-selling author Scott Turow. “But I’ll guarantee one thing: He’ll want a bigger advance than Obama got.”