A Very Bad Poem From the Book Review Archives Just as it does today, in its earliest years, the Book Review occasionally commissioned poetry — from John Masefield, Percy MacKaye (who delivered “The Heart in the Jar: A Meditation on the Nobel Prize Award for Medical Research, 1912”) and even Edgar Lee Masters of “Spoon River Anthology” fame, whose verse about Theodore Dreiser, his contemporary in the Chicago Renaissance literary movement, graced the Oct. 31, 1915, issue.

Despite the fact that it ran on Halloween — and was filled with terrifying imagery that compared Dreiser to a jack-o’-lantern, with “eyes [that] burn like a flame at the end of a funnel” and “powerful teeth” — the poem doesn’t seem to have been written as a holiday spoof. Like “Theodore: A Poet,” a homage to Dreiser that appeared in “Spoon River Anthology,” this piece was later reprinted in several books about the “Sister Carrie” novelist. 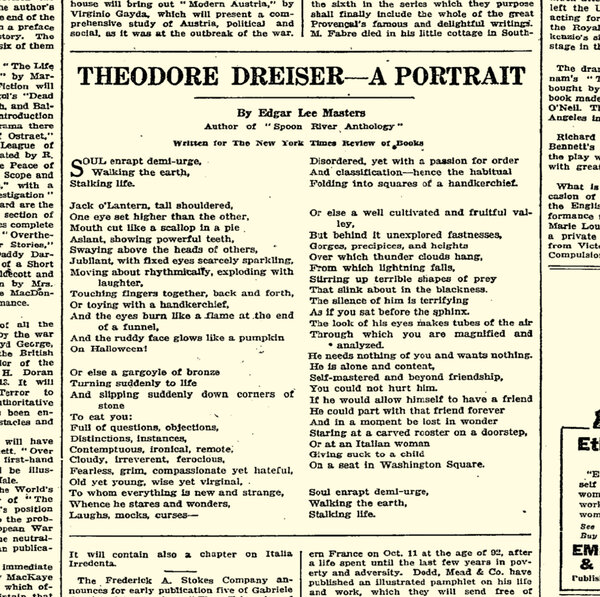 Tina Jordan is the deputy editor of the Book Review and author of a book celebrating its 125th anniversary, to be published this fall.