Adam Zagajewski, Poet of the Past’s Presence, Dies at 75 Adam Zagajewski, a prizewinning Polish poet and a former dissident in exile whose life and verse reverberated with laments over displacement and reminders that the past perseveres, died on March 21 in Krakow, Poland. He was 75.

His death, on UNESCO’s World Poetry Day, was confirmed by the Polish affiliate of PEN International, which promotes free expression, and Mr. Zagajewski’s publishers. The cause was not immediately disclosed.

“Nothing can replace this hole in Polish spirituality,” the historian and former dissident Adam Michnik was quoted as saying in Polish newspapers after the death.

Mr. Zagajewski (pronounced zah-gah-YEV-sky) gained prominence in Poland while in his early 20s as a black-sweatered protest poet, a member of the Generation of ’68, which was opposed to the Communist government and its alliance with the Soviet Union. His writing was banned in the mid-1970s.

Mr. Zagajewski, who had been living in Krakow, went into exile in 1982 in Paris, where he gained international acclaim for works first published in Polish and later translated. (He was also fluent in English, French and German.)

The Irish novelist Colm Toibin wrote in The Guardian in 2004, “In Zagajewski’s best poems, he has succeeded in making the space of the imagination connect with experience; things seen and heard and remembered in all their limits and sorrow and relished joy have the same power for him as things conjured.”

Mr. Zagajewski might have fallen into a canon defined by the bitter legacy of Word War II, Mr. Tobin wrote, but he was rescued from it “by the great pull in his work between a tragic conscience and a voice always on the verge of bursting with comic pleasure.”

After the 2001 terrorist attacks on the World Trade Center and the Pentagon, The New Yorker published a prescient Zagajewski poem, titled “Try to Praise the Mutilated World,” written a few months earlier (and translated by Clare Cavanaugh). It read in part:

You should praise the mutilated world.

Remember the moments when we were together

in a white room and the curtain fluttered.

Return in thought to the concert where music flared. 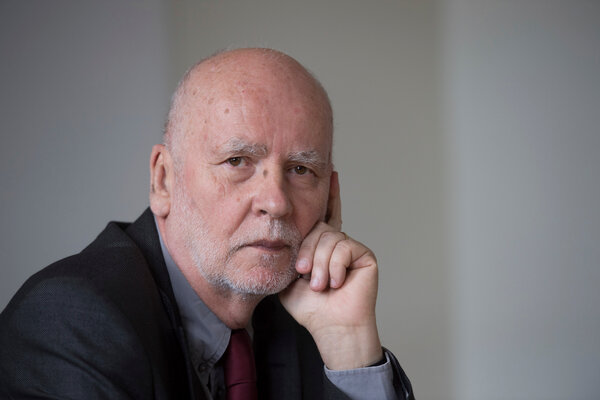 Adam Zagajewski was born on June 21, 1945, in Lvov, which was in Poland when the Soviets invaded in 1939. His father was Tadeusz Zagajewski, an engineer, and his mother was Ludwika (Turska) Zagajewski. After World War II, redrawn borders placed the city, now known as Lviv, in Soviet Ukraine. The family was expelled and moved to Gliwice in Silesia, in southern Poland, which had been part of Germany.

Mr. Zagajewski earned a degree in psychology at the Jagiellonian University in Krakow in 1968 and a master’s in philosophy in 1970. He taught at the Institute of Social Science of the AGH University of Science and Technology in Krakow.

He published his first poem in 1967. A year later he helped found Teraz, a poetry group inspired by the police suppression of protests against government anti-Semitism. He and Julian Kornhauser, another member of the group, wrote a manifesto for the so-called New Wave of avant garde poets in 1974 urging his generation to avoid allegories, embrace realism and “speak the truth you serve.”

Referring to his departures from Lvov and later Krakow, Mr. Zagajewski said: “I lost two homelands, but I sought a third: a space for the imagination.”

The reviewer Joachim T. Baer, writing in World Literature Today in 1992, summed up Mr. Zagajewski’s themes as “the night, dreams, history and time, infinity and eternity, silence and death.”

He was the author of the prose collections “Solitude and Solidarity” (1990) and “Two Cities” (1995), both translated by Lillian Vallee; and a memoir, “Another Beauty” (2000), also translated by Ms. Cavanagh.

Writing in The New York Times Book Review, the literary translator and playwright Philip Boehm described “Without End” as “an astonishing book,” adding that the author’s poems “pull us from whatever routine threatens to dull our senses, from whatever might lull us into mere existence.”

In The New Republic, the poet Robert Pinsky wrote in 1993 that Mr. Zagajewski’s poems, in a collection titled “Canvas,” were “about the presence of the past in ordinary life: history not as chronicle of the dead, or an anima to be illuminated by some doctrine, but as an immense, sometimes subtle force inhering in what people see and feel every day — and in the ways we see and feel.”

Among Mr. Zagajewski’s awards were the Prix de la Liberté in 1987, the Neustadt International Prize for Literature in 2004 and the Princess of Asturias Award, the Spanish-speaking world’s top humanities award, in 2017.

Information about his survivors was not immediately available.

In a 2017 essay titled “Slight Exaggeration,” Mr. Zagajewski recounted that one of his father’s callings was to comfort his mother. On Sept. 1, 1939, he wrote, when the Germans invaded Poland and the bombs began to burst everywhere, Tadeusz Zagajewski went so far as to assure his wife that the attacks were “‘just air force exercises. … Nothing to upset us. … There won’t be a war’ — these were my father’s historic words, by which he granted his wife, my mother, an extra 15 minutes of peace.”

“He prolonged the interwar era by a quarter of an hour especially for her.”

In retrospect, his father called his words a slight exaggeration, “a good definition of poetry,” Adam Zagajewski wrote, “until we make ourselves at home in it.”

“Then it becomes the truth,” he added. “But when we leave it again — since permanent residence is impossible — it becomes once more a slight exaggeration.”