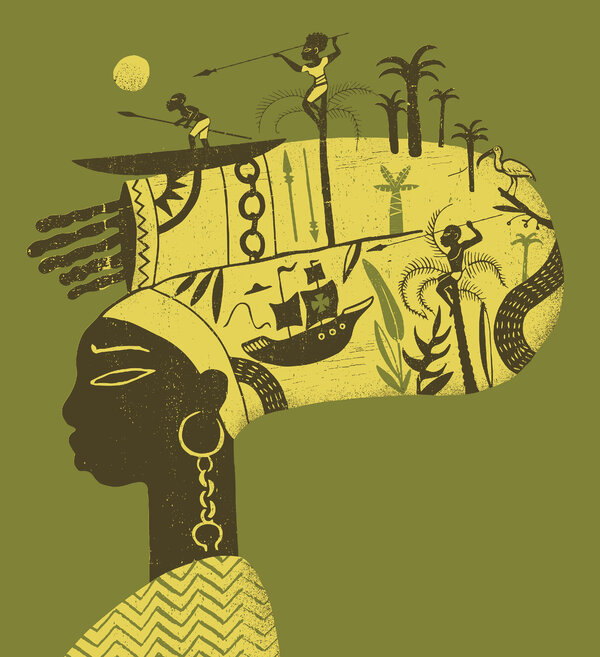 Surrounding Gayl Jones is an aura of violet light. The poet Sonia Sanchez once called Toni Morrison — who discovered Jones’s talent and became her editor in the 1970s — “a blessed one.” Half a century later, “Palmares,” Jones’s fifth novel and her first in 22 years, is ample evidence that she is also one of the blessed ones.

Set in Brazil in the late 1600s, “Palmares” is an unveiling of the brutal enslavement and degradation of various African peoples who were kidnapped by the warring factions of Europe — the English, the Spanish, the Dutch, the French, but most of all the Portuguese — in their ravenous quests for land, resources, power and destruction. This is familiar territory for Jones, who explored the same landscape in her 1975 debut novel, “Corregidora.” And it’s fertile ground to seed: The Blackest nation outside of Nigeria, Brazil was the last country in the Western Hemisphere to abolish slavery, in 1888.

But more than that, “Palmares” is an odyssey, one woman’s search first for a place, and then for a person. A woman named Almeyda narrates in retrospect, with a hindsight that provides her perspective, if not always clarity. She begins her tale as an enslaved 7-year-old “Almeydita,” inquisitive and often silent. One day she encounters a stylish, barefooted stranger carrying herself unlike any Black woman she’s ever known. “Are you a slave woman or a free woman?” she asks, and the stranger responds, “I am neither kind.” Almeydita’s mother explains that the woman is an African princess, but that free Black people exist in Brazil too: in Palmares, a settlement of those who’ve escaped or been rescued from the Atlantic slave trade.

The notion of self-governing Black people fascinates Almeydita, but she doesn’t yet long for it. She already has her place: on a plantation with her stoic, watchful mother and her magical, humorous grandmother, where spirits abound and women prepare teas that protect them from rape.

Only when her home is shattered does Almeyda, now dislocated, eventually find herself in the fabled city of liberated Black people. There she falls for, and marries, a Muslim suitor named Martim Anninho; but, as we learned in Morrison’s “Paradise,” or Ursula K. Le Guin’s “The Ones Who Walk Away From Omelas,” utopias come at a severe price. The sudden loss of her love sends the now-older Almeyda on a quest to find him.

The squiggly lines beneath each chapter title are not merely a design, but signify a benevolent serpent deity, Iararaca, who’s evoked in the story time and again and is either following or leading Almeyda, and the reader, on the journey. But she travels mostly alone (joined only for a time by her first friend, a free Black woman named Mauritia); through mountains, jungles, city-states both Indigenous and imposed, inside shadowy caves, along shores, through dangers. And for any dark-skinned Black woman in a land of seemingly infinite gradations of race and hue, those dangers are many, omnipresent.

Moving into the fantastical, Jones takes Almeyda into the wilderness, where she’s guided by a mystic, Luiza Cosme, who becomes her mentor. From her Almeyda learns how to gather the magic of the wild and use it in service of healing — and how not to indulge in its other powers.

Jones writes in ancestral tongues, shifting between languages, going from dialogue to dream-speak, fever to prophesy, sometimes midsentence. Memory is rendered in fragments, because trauma rends. Every declaration is formed as a question; every certainty undermined by truth, just as in life. She introduces names or ideas that aren’t explained until pages later, and uses repetition (“I’m not a common man,” Almeyda’s white owner tells her over and over, in shame) just like blues music, to remind you that the sorrow is real.

This book takes patience. Time sometimes stretches, sometimes collapses in on itself: “Really, she was not an old woman,” Almeyda thinks of her grandmother. “She was only 30 years older than me, 37 then, but she called herself an old woman, and my age made me agree with her.” Jones renders time relative, objectively meaningless. And isn’t it? Aren’t we all just caught up in repeated cycles, pretending that passage affords us evolution when all it does is distance us further from the things we’re forestalling: honesty, self-inventory, accountability and healing? So much of Jones’s 17th century is indistinguishable from our 21st.

The astonishing peak of the novel is an experimental chapter called “The Narratives of Barcala Aprigio,” in which Almeyda presents a set of parables written by Aprigio, the multiracial husband of a woman Almeyda stays with temporarily after she’s sold away from the plantation. His collection of stories includes one called “Lice Scratching,” which seems to be told from the vantage of a woman Jones has sketched only briefly earlier in the novel. “That time I was in the wine cellar,” the woman says. “I got my answer. No invisible girl. I said nothing. Bananas, bananas, bananas. If he’d caught some Negro disease. When he came to me I said, Go to the devil. I could have knocked the woman, that other woman I heard how she murdered the mulatto girl and what did that do? But me? I still have her come and scratch the lice from my hair.” Jones’s writing is most potent when it blends the ethereal and the corporeal, as if it comes from some celestial place.

Her oracular integrity comes into question, however, when she introduces characters who are lesbian or gender nonconforming. They are depicted as strange, of dubious sense and morality, violent, to be approached with caution, and with the kind of curiosity that dehumanizes, intentionally or not. When Almeyda and Anninho encounter an Indigenous Tapuyan woman named Maite (“Woman?” Almeyda thinks. “There was a bow and arrow slung across her shoulders, and her hair was cut short like a man’s”), Almeyda asks her husband: “Why does that woman look and behave like a man?” Anninho replies that she’s taken a vow of chastity, and hunts, goes to war, lives alone with a woman who serves her. “Such women don’t have men,” he says, “but they must look like men, cut their hair like a man and do the things that men do.” Almeyda can’t even speak the question she wants to ask (“Do they … ?”), and Anninho doesn’t know the answer.

Here queerness is depicted as merely strange, but elsewhere in the novel those who don’t conform to heteronormative standards are depicted as predatory. Learning from Luiza how to see across time and space, Almeyda has a vision in which a woman named Zairagia is accused of pretending to be an exorcist “for her own lusts,” as an excuse to rape women who are allegedly possessed. It’s confounding that within the world of the novel, there’s no sense that queerness can ever be an intrinsic state of being, part of both nature and divine imagination, or that it’s possible for queer love and desire to be consensual.

What can explain these scenes? They are filtered through Almeyda’s eyes, and we learn early on that on the plantation, Almeyda has been raised Catholic, presumably to believe homosexuality is a sin. She never fully embraces the ancestral spiritual knowledge, imparted first by her grandmother and then by Luiza, that would provide her a more inclusive understanding of the human soul. These limitations on our narrator’s part become an unexpected kind of revelation.

In that sense, “Palmares” is a mystery in the most ancient use of the term: It is an artifact that can be discerned only through epiphany. Or as the kids put it these days: “If you know, you know.” Mercy, this story shimmers. Shakes. Wails. Moves to rhythms long forgotten. Chants in incantations highly forbidden. It is a story woven with extraordinary complexity, depth and skill; in many ways: holy.

The story ends not exactly in medias res, but on a beat that begs continuation. This feeling of masterpiece-in-and-as-process is deliberate, and genius. “Palmares” is the first of five new works by Gayl Jones to come in the next two years. After suffering the author’s absence for far too long, we — the witnesses longing for texts like hers, the borderline sacred — can rejoice at her return.