Home » Books » Benjamin Dreyer and the rights and wrongs of grammar

Benjamin Dreyer and the rights and wrongs of grammar

Are you a perfectionist or a pragmatist when it comes to the English language? Do you care about how you write as well as what you write about? Does it make you feel like you got out of the wrong side of the bed if you find yourself, or somebody else, ending a sentence with a preposition? Do you become hot under the collar, like Benjamin Dreyer, when people put apostrophes in the wrong place?

Dreyer is the copy chief at New York-based Random House, the largest paperback publisher in the world. His wryly titled handbook to the English language feels your pain as he surveys the terrain with an unmistakeable relish: his passion for words and for the myriad ways we go about arranging them permeates his book. 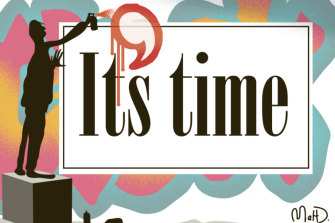 He’s open to discussing his views about things, but don’t get in his way if you don’t know what you’re talking about. He cites actress Zoe Caldwell in support of his profession. ‘‘Copy editors,’’ he remembers her telling him at a party, ‘‘are like priests safeguarding their faith.’’

He’s witty and informative, he loves to digress (the footnotes are frequently a delight), and he knows how to make it fun to think about the often-daunting chasm between how we write and how we should write. He also recognises that our options are in a constant state of flux.

About the rule that insists we should never end a sentence with a preposition, for example, he urges flexibility. Sometimes, he explains with illustrations, it’s the best way to go. To illuminate his point, he recycles an old joke, which I’ll paraphrase for the sake of brevity (he expertly fleshes it out). It’s about two women seated side by side at a fancy dinner party, one a ‘‘frosty matron’’, the other a ‘‘Southern gal’’. To the latter’s amiable, ‘‘So, where y’all from?” her companion looks down her nose and declares, ‘‘I’m from a place where people don’t end their sentences with prepositions.’’ To which the Southern gal sweetly replies, ‘‘OK. So where y’all from, bitch?’’ 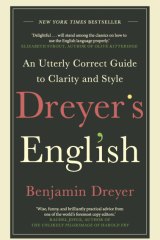 Fun is to the fore. Dreyer hardly needs to tell us that ‘‘eek!’’ shouldn’t be confused with ‘‘eke’’, but he does, and it opens the door to some choice repartee. He discusses the (mis)use of the collective noun that agitates the pedant in me. Wrong: ‘‘Essendon are the best team in the AFL’’; ‘‘The government are busy making yet another mess of the economy’’; and so on. Right: ‘‘is’’. (I hasten to add that these are my examples, not his.)

He joyfully provides lists of common mistakes: it should be ‘‘just deserts’’, not the way so many of us have always thought it should be spelt; ‘‘forward’’ is not ‘‘backward’’, but it’s also not an acceptable substitute for ‘‘foreword’’. Then there are the grammatical gaffes, such as the dangling modifiers that plague so much contemporary writing. He details pet hates, such as people ‘‘reaching out’’ rather than just ‘‘making contact’’; or pedants who say ‘‘I too’’ rather than ‘‘Me too’’. He has fun with prose that misarranges sentences – or should that be ‘‘deranges sentences’’? – quoting a Groucho Marx gag on the subject: ‘‘One morning I shot an elephant in my pyjamas. How he got into my pyjamas, I’ll never know.’’

He’s not perfect. He gets some things wrong. Expressing scorn about ‘‘the prissyism ‘til’ ”, he asserts that ‘‘till’’ and ‘‘until’’ always mean the same thing, when they don’t. As a noun, ‘‘till’’ refers to a cash register; as a verb, it’s what you do when you’re cultivating land. ‘‘Until’’ is a preposition; ‘‘til’’ is the appropriate abbreviation for it. He bizarrely displays his ignorance of any etymology for the phrase ‘‘brownie points’’ (For starters, Brownies is the name for junior Girl Guides).

But, worst of all, Dreyer’s English turns out to be exclusively American English; he even heads one section How Not To Write Like A Brit. Talk about finding yet another way to make America grate again. (To be fair, there is now a British edition of the book.) 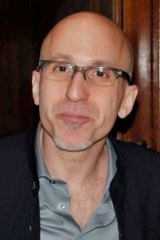 Benjamin Dreyer is witty, informative and loves to digress.Credit:

Still, having Dreyer on hand might have saved the local newsreader who, on the ABC News, at 7.14pm on November 7, 2001 (OK, yes, I’ve been saving this one for the right occasion), read with a completely straight face that ‘‘there is concern that, like Japan, interest rates may have outlived their usefulness’’.

And, despite its occasional stumbles and its parochialism, his book is a most welcome addition to a noteworthy genre, one that includes George Orwell’s always relevant essay, Politics and the English Language (in Inside the Whale and Other Essays), Lynn Truss’ terrific tract about punctuation, Eats, Shoots & Leaves, Mary Norris’ delicious Between You & Me: Confessions of a Comma Queen, and Jeff Deck and Benjamin D Herson’s irresistible The Great Typo Hunt: Two Friends Changing the World, One Correction at a Time, about two guys driving around the US correcting signage grammar along the way.

You can read Dreyer’s English from cover to cover, if you like, but it’s the kind of book that would also benefit from dipping in and out, allowing one the time to savour the drollery and (re)discover bit by bit the gloriously confusing art of the English language.

Tom Ryan’s latest book, The Films of Douglas Sirk: Exquisite Ironies and Magnificent Obsessions, is published by the University Press of Mississippi.