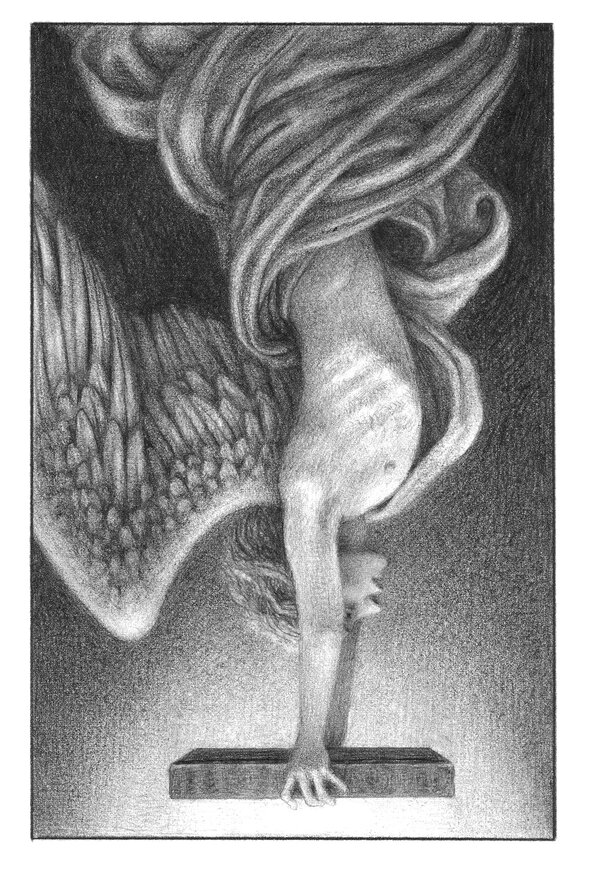 A widower isolates himself to write an encyclopedia of all human knowledge — and dies decades later, still in the middle of the first entry: apple. The entry is so long that its pages fill an entire house.

The stories seem related to one another. There is always a first-person narrator; there is usually a boy named James; the narrator loves James. But they don’t fit into one narrative, or even one world. Sometimes James is dead; sometimes he is becoming king of the moon, “making sure the universe is safe for dreaming.”

To soothe himself in the face of the immense pain of the world, a man steals and hoards beautiful objects, but in a fit of rage and despair he smashes them all. Then he uses the glittering shards to make incandescent scenes of catastrophe.

Each tale is accompanied by art, which, as we’ve come to expect from Selznick, is stunning. We get two pieces per tale — first a kaleidoscopic image of shapes broken into crystalline forms; then, on the next page, the scene that was being refracted: a ship, a dragon, a clock, vines, a castle.

A mysterious narrator takes a boy to a library where the books tell the story of everything that ever happened, and everything that ever will happen. The boy wants to know where his story is. But the narrator, despite having written every book himself, by hand, doesn’t know, doesn’t even remember what he has written. The boy is furious: “What’s the point of knowing everything if you forget it and can’t even figure out where the answers are?” Later we find the boy trying desperately to organize the books. “It was an impossible task,” the omniscient amnesiac narrator muses, “but the gesture touched me somehow.”

Indeed by the middle of “Kaleidoscope” I became frustrated, like the boy. I wanted more — a hidden narrative to uncover, a key that would unlock the book’s secrets. Certainly some young readers will feel this way, and lose interest. But readers of any age who love literature will find questions that demand engagement, images that refuse to fade from the mind. While each tale seems like a sliver of a larger story we’ll never learn, we get the impression that we’re hearing the best part. Perhaps that is enough.

Selznick tells us, in an author’s note, that he wrote “Kaleidoscope” while in lockdown, separated for three months from his husband, and indeed the book feels like Covid art. Not because it deals with a virus (thankfully) but because it is suffused with longing, with isolation that can almost be breached, with bewilderment, with rage and with wonder at the fragile exquisiteness of life.

In a garden, or The Garden, a dragon offers the narrator fruit from the Tree of Knowledge. The narrator considers, and then refuses: “If I knew everything, there would be no mysteries … no wonder. … There would just be … answers.”

There are no answers in this gorgeous book. There are just two of us — Selznick and the reader — lying side by side in the belly of a sphinx. Not trying to answer a riddle. Just appreciating being in the middle of one.