Home » Books » Climbing into the ring of truth

Climbing into the ring of truth

The late Scottish sports writer Hugh McIlvanney, whom Alex McClintock quotes in his memoir, On the Chin, once said boxing was more of a writers’ sport than any other: "You have courage, romance, skulduggery, excitement and moments of unspeakable horror."

After a couple of decades in the boxing world, I can attest to that. I have seen it all, from sickening knockouts to heart-stopping athleticism, from moments of grace and beauty to disappointing egotism and self-interest. 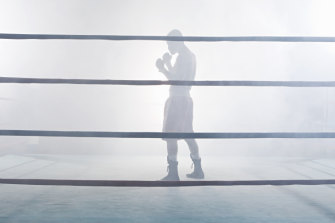 George Foreman once said boxing was like jazz. The better it is, the harder it is to understand. Alex McClintock tries to understand it in his memoir.Credit:Alamy

For those who condemn boxing because it involves two people trying to hurt each other, books such as On the Chin are a welcome antidote. While it is about that, it is also about so much more.
It is subtitled "A boxing education", and for McClintock, his readers and anyone who thinks boxing is an easy subject to dismiss, it absolutely is. It’s full of vivid personal experiences and meticulously researched information.

McClintock, an Australian journalist now based in Canada, took a familiar journey into the ring: simply trying to get fit. He was a comfortable, middle-class slob who surprised himself with the quality of his left jab, and with it he ended up contesting a NSW state novice title.

Only those with talent and endless resources of energy are able to take their careers much further than that, which is not to underrate this transformative achievement. His entry into the ring taught him more about himself than anything he’d ever done. That’s a pretty common story, and in this case it’s told with great insight. 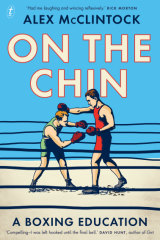 Another famous boxing writer, Jimmy Cannon, suggested boxing was the red-light district of sport, which is why some writers like to exploit its lurid extremes without sticking around for the rest. This is the standard trope in most mainstream media, which only really report on the big fights, without any knowledge that such events might not be the best on offer. They have scant understanding of the sport’s history, let alone its contemporary vital signs. Boxing is an easy target for so many reasons.

As George Foreman once said: "Boxing is like jazz. The better it is the harder it is to understand."

It’s a different calibre of writer who chooses to look at the good, the bad and the ugly and hold their gaze long enough, and close enough, to glean some deeper understanding. A better writer still is able to bring us a step closer to knowing the human condition through this complex and compelling martial form.

In the United States, the literary world is replete with such commentary. From the engaging, idiosyncratic prose of A.J. Liebling to the more narcissistic viewpoint of that notorious boxing junkie Norman Mailer. There is also the precise, although dated gender reading, of Joyce Carol Oates in her insightful book-length essay On Boxing.

For some reason Australian snobbery when it comes to boxing is more entrenched. I suspect it’s dismissed largely because it has been a working-class sport and therefore assumed to be devoid of intellectual depth or broader relevance. That couldn’t be further from the truth.

"Stories about boxing," McClintock writes, "are not just stories about people punching each other in the face. They are stories about class, race, migration, urbanisation, politics, history, sex, gender, the body – about what it means to be human."

The sport is profoundly intricate and fascinating, from inside the ring and out. And McClintock joins those who have let their eyes and their thoughts linger. He also suggests further reading and has included an impressive array of literary references, from Kasia Boddy’s Boxing: A Cultural History to Mike Silver’s thoughtful examination of the sport’s decline, The Arc of Boxing, and David Remnick’s Ali biography King of the World.

McClintock manages to weave the heavy and the light into an accessible and charming conversational style. He is selective in his inclusion of boxing history and avoids the tedious blow-by-blow re-creation of a 25-round bare-knuckle bout in a paddock some time in the 19th century, unless it is to remind us that fighting until one or the other of the contestants could no longer stand is not part of the modern game.

But what I love most about this book is the local, contemporary material. Most of it would ring true to anyone who has laced on the gloves. From the HK Ward gym at Sydney University to the leagues club colour of his own forays into the ring, McClintock is self-deprecating, funny and informative. I love the warm character sketches of Fritzy, his first and somewhat dubious coach, to the evolved masculinity of Olympian Paul Miller, who turns out to be a wise mentor and a decent guy, which, as it happens, is the rule rather than the exception in amateur boxing.

McClintock plays down his own achievements and reminds us at the end that he isn’t really a fighter, despite having had several amateur bouts. But actually he is. He knows that if you step through the ropes to compete, the boxing world will always deem you part of a courageous minority. The act itself, regardless of the outcome, is testament to that.

He says boxing changed his life. And it does. I’ve experienced and witnessed this again and again as a boxer and as a coach. You don’t need to be a champion for that transformation to happen. All you need to do, as Theodore Roosevelt would say, is to "dare greatly".

Mischa Merz is the author of two boxing memoirs, Bruising and The Sweetest Thing. She is a former Australian champion and US Masters champion, and now runs Mischa’s Boxing Central.