Home » Books » Coffee Time for Zora and Fannie, Before the Harlem Renaissance

Coffee Time for Zora and Fannie, Before the Harlem Renaissance

On May 1, 1925, the National Urban League bankrolled an awards dinner in a Manhattan restaurant to honor Black writers, poets and playwrights. A newcomer to the city, Zora Neale Hurston, won the second-place prize ($35) in both short story and playwriting, and her exuberance charmed the influential guests. Annie Nathan Meyer, founder of Barnard College, was so taken with Zora that she vowed to get her a scholarship there. And Fannie Hurst, the best-selling novelist, was impressed as well. After Zora entered Barnard, and desperately needed a job with flexible hours, Hurst hired the student as her live-in personal secretary — typing, chauffeuring and sharing confidences over coffee.

Fannie learned that Zora had supported herself since she was 13 years old. It was at that age when she ran away from her home in Florida. After attempting to kill her stepmother with her bare hands, getting out of town seemed a good idea. Zora survived (barely) on odd jobs until she was 26, when she enrolled herself in a Baltimore high school by claiming to be 16. She was still taking 10 years off her age when she entered the writing contest. In truth she was 34, just five years younger than Fannie. 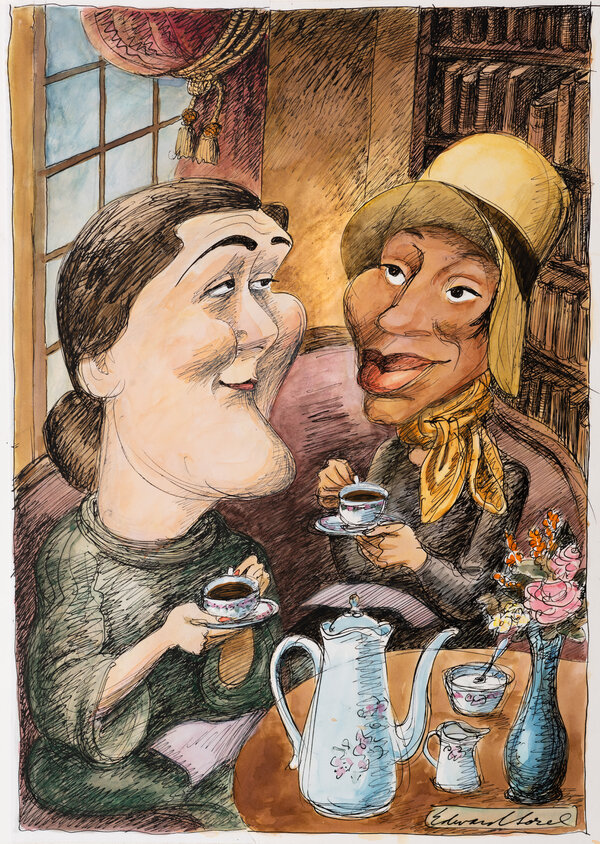 When Barnard’s dean learned of Zora’s position with the celebrated Fannie Hurst, a student loan fund was found for Zora’s use. This made it possible for Zora to afford an apartment of her own in Harlem, but the women stayed in touch. When they met, Zora would amuse Fannie with stories about being the only Black person at Barnard. Her classmates, she reported in a letter to another friend, had warmed up to her enough to urge her to come to the junior prom at the Ritz Carlton. They even “offered to exchange dances with me if I will bring a man as light as myself.”

At that 1925 awards dinner there were so many elite white people who supported Black causes that Zora coined a word for them. By combining “Negro” with “humanitarian,” she came up with “Negrotarians.” Those Negrotarians (most of whom, like Fannie Hurst, were Jews) could not have realized it at the time, but they were witnesses to the start of the Harlem Renaissance, in which Zora would play a major role.

Edward Sorel, a caricaturist and muralist, is the author and illustrator of “Mary Astor’s Purple Diary.”