Home » Books » Confessions of the man who failed to nail Savile

Confessions of the man who failed to nail Savile

Confessions of the man who failed to nail Jimmy Savile: Louis Theroux reflects on his encounters with the former children’s TV presenter in a new memoir

GOTTA GET THEROUX THIS

For almost as long as I can recall,’ says Louis Theroux, ‘I had heard there was something sexually untoward about Jimmy Savile.’

Unfortunately, like most people, the documentary maker assumed that ‘if he’d really been a paedophile or a necrophile, then 40-plus years in the spotlight of British entertainment would have brought something solid to light’.

So Theroux approached his 2000 programme When Louis Met Jimmy in good faith, hoping to probe into the ‘weird and creepy’ aspects of Savile’s life as a fading celebrity. 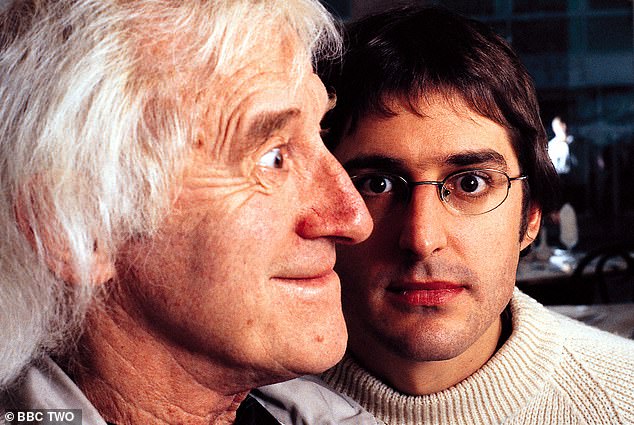 Although Theroux went further than most journalists, directly questioning the former children’s TV presenter about rumours he was a paedophile, he also struck up ‘something like a friendship’ with him.

So when hundreds of sexual assault claims were made against Savile after his death in 2011, Theroux was horrified to realise he had been hoodwinked.

In 2016, he made another documentary in which he met Savile’s victims and took himself to task for having been ‘silly and gullible’.

But Theroux is, understandably, still haunted by Savile. His new memoir is, on one level, an investigation into how Theroux grew up to be The Guy Who Failed To Nail Savile, and an exploration into how he learns to live with that.

Louis is the son of U.S. novelist and travel writer Paul Theroux and English BBC producer Anne Castle. Although he has been guarded about his personal life in the past, here Theroux opens up about the pros and cons of a Bohemian childhood in which sex and drugs were all part of the family conversation.

He is grateful for the uncensored access to literature, from classic novels to Playboy, but, now a father of three himself, he feels that his parents delegated their responsibilities to a series of au pairs, ‘unmindful of the impact their semi-detached relationship with each other was having on us’.

(Though he does acknowledge that, ‘like most parents of that era, they were figuring it out as they went along’.) 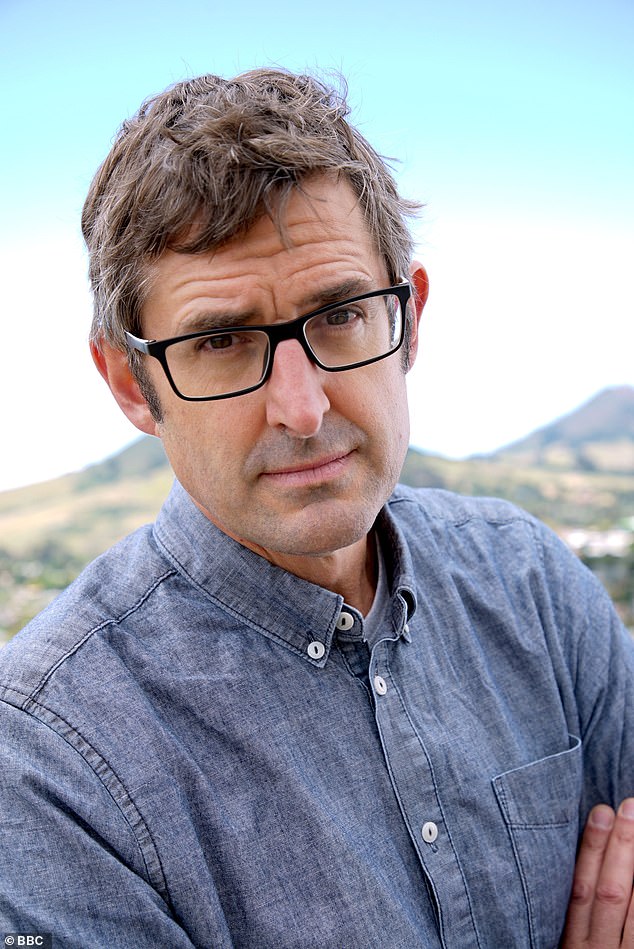 Louis (pictured) who studied at Oxford, tried to break into television in New York before finding success on Michael Moore’s TV Nation

‘With the vaguely hippy-ish ethos went a certain relaxing of the rules on monogamy. My mother had a policy of being OK about sex on location when my dad was away and, to be fair, in the early days his trips could last as long as several months. Eventually, his relationships with other women became more consuming, and the strain was too much for the relationship to bear.’

Whether or not his unconventional home life was to blame, little Louis was certainly an anxious and socially awkward boy who dealt with his worries by burying himself in books.

He was sent to the private Westminster boarding school, where he was tasked with waking up the older boys (including future Lib Dem leader Nick Clegg).

His hard work paid off and got him into Oxford, where he earned a First in history and developed a lifelong interest in the way human behaviour and morality sways with the times and culture.

He mulled on ‘the slaveholders and pederasts in Ancient Greece. Godbotherers in the Dark Ages. Torturers and witch hunters in early modern England.’ All the strange and dangerous behaviour he would later capture on film had probably — in one time and place — been perfectly normal.

It was at Westminster, and again at Oxford, that he met his first wife. She moved with him to New York, where he tried to break into television. 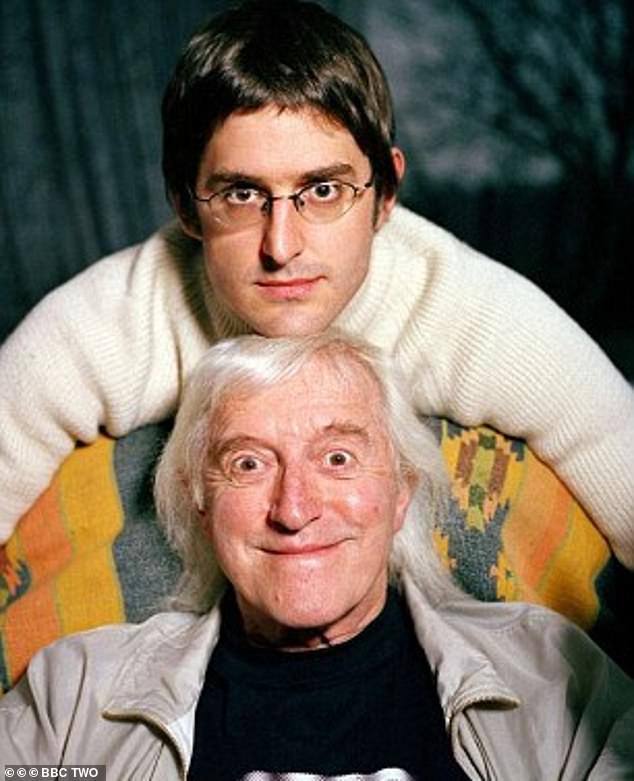 Louis (pictured top with Jimmy Savile) learned that ITV were making a documentary exposing Savile as an abuser, while at his wedding reception in 2012

He eventually found success on Michael Moore’s TV Nation as the quirky Englishman sent to pose faux-naive questions to a range of American oddballs, from gun-toting survivalists to UFO-worshipping religious cults.

Although there was an element of mickey-taking, he says he has always tried ‘to give people the benefit of the doubt. My working practice was to see evil as a side-effect of misguidedness or selfishness or woundedness, but only very rarely as an attempt to do wrong.’

Theroux also found that being around people in outlandish or extremely stressful situations actually relieved his own anxiety.

‘The qualities that make me good at my job are the same ones that make me bad at life,’ he realises. ‘I have a habit of seeing life as though from behind a glass. I allow other people to have emotions.’

His marriage fell apart in 2000 as Theroux’s career at the BBC took off. ‘There’s nothing real about you,’ his wife told him. He worried she might be right. He made terrific documentaries about former Conservative MP Neil Hamilton and his wife Christine, ex-boxer Chris Eubank and publicist Max Clifford, as well as a bad one about failing to meet Michael Jackson. 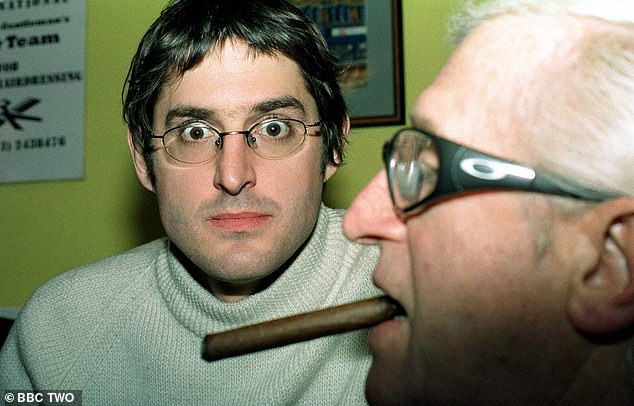 He met his second partner Nancy — who also worked in TV — in 2003, and offers a self-critical account of his failures as a husband and a father to their three boys. Like his dad, he says, he spent too much time away from home, leaving Nancy to say she felt ‘lonely . . . [like] a single parent’.

They finally married in 2012. It was during his wedding reception that Theroux learned ITV was making a documentary exposing Savile as an abuser.

The same year, Scotland Yard launched its Savile investigation, which eventually concluded that the DJ had sexually assaulted patients (aged five to 75) in 28 NHS hospitals over several decades.

The police watched all the footage Theroux shot and heard about how Savile had gestured to his bed and said he called it ‘the altar . . . because that’s where the sacrifices happen’. 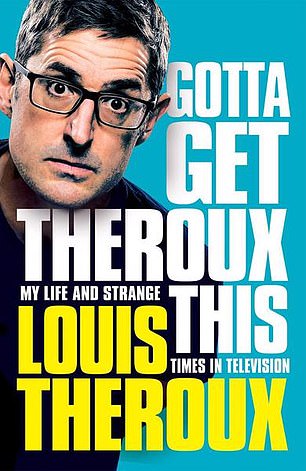 Theroux’s meetings with Savile’s victims make for necessarily difficult reading. He’s compassionate, although there’s an odd moment when one woman invites him to attend a counselling session with her so he can witness the emotional fallout. He doesn’t go, and doesn’t explain why.

Today, Theroux seems more settled. Asked if he will run out of ‘weird people’ to film, he says he doesn’t think that’s possible.

You can hear him in concluding voiceover mode when he says we need to keep asking questions because ‘we feed ourselves lies — about the unconquerable strength of a mother’s love or the ennobling quality of suffering.

‘ “What doesn’t kill you makes you stronger.” Huh. OK. Unless it leaves you in a wheelchair, with PTSD and feeling suicidal.

‘So where does that leave us? Just struggling forward, doing the best we can, with no grand answers, making tiny decisions to try to be slightly better.’