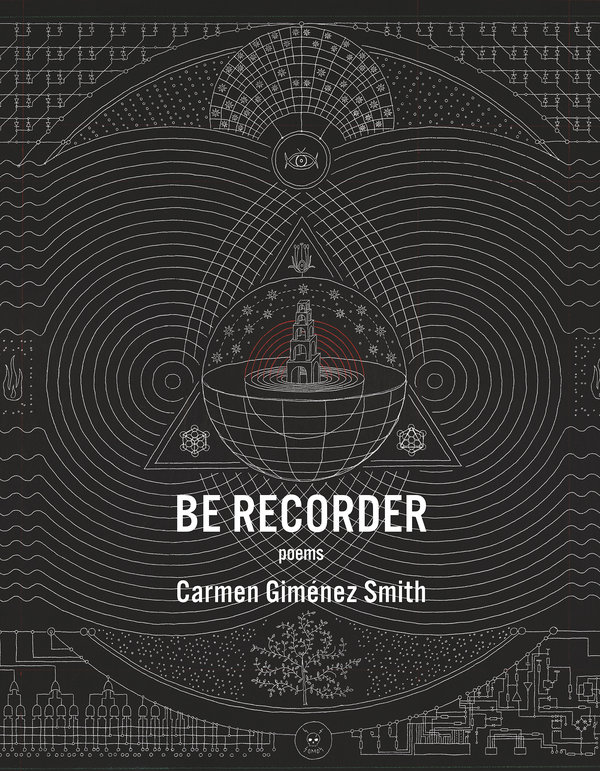 “Though I was born in America / I wasn’t born American,” says the speaker of the long title poem in Giménez Smith’s latest collection. How then is one “naturalized” into “Americanness”? She tells us: “I became American / when I memorized the national anthem / …or when I thought my first / racist thought.” A work of lyric activism, “Be Recorder” wants to know “what parables became policy” and “are counter- / histories in your allusions” — that is, she wants to know who’s telling the stories and how these stories affect public perception of others’ humanity, especially that of immigrants. With an urgency propelled by largely unpunctuated language and nimble lines, Giménez Smith careens between devastating accounts of racial and xenophobic violence — “brown bodies brown / murdered bodies and drowned” — to scathing satires of the “American dream” with its “organic and TV and Spanx and TV.” While taking on gentrification and border walls, white feminism and late capitalism, Giménez Smith manages to frame a queer, Latinx, immigrants’ daughter, motherhood poetics that’s entirely her own. “Ars Poetica,” a poem about writing poetry, is a series of “I” statements, admissions and identifications that position selfhood, one’s identity, as inseparable from one’s poetry. Giménez Smith insists that no one (especially women and others disenfranchised by our culture) should apologize for this. “I want to recommend that we stop apologizing,” she writes early on. “Personally, / when the word comes into my mouth, I’m going to shape it into/ a seed to plant in another woman’s aura as love.”

“It’s because of you / something heavy should fly,” Erlichman writes in one of her debut collection’s many addresses to lithium, a medication prescribed to treat bipolar disorder. Through her nonlinear narrative of hospitalization, treatment and everyday life, Erlichman turns a confessional self-portrait of crisis into a chemical, chimerical joyride toward self-acceptance. One speaker takes a bath with the musician Björk; another lets Phineas Gage, the 19th-century railroad foreman who survived an iron rod driven through his frontal lobe, crash on her couch. Beyond these more fantastical poems, however, the speaker, self-identified as “one of many puzzlebodies,” negotiates the culture of the “hospitaljail” and, after her release, navigates her changed relationships with friends, family and lovers. At times she encounters bias or insensitivity, revealing just how much Western culture stigmatizes mental illness, as with the friend who says “but / you / don’t / seem /like / you / have / Bipolar” or the “pharmacist at the pickup counter” who “whispered, ‘The lithium?’” The collection may challenge readers with its leaps between imagistic, short lyrics and interruptive, surreal narratives — variations that no doubt echo neuro-fluctuations. With patience, however, these stylistic upheavals reinvigorate the book’s project again and again, allowing the ode form tremendous malleability and verve, all the while destigmatizing bipolar disorder through candor, intimacy and creativity. “There is no question like the body,” Erlichman writes, and “Odes to Lithium” deserves praise for its unrelenting asking.

The first poem of Sharma’s fifth collection ends with a self-address: “You have to find your strength in this.” This no doubt refers to the loss of the speaker’s husband to “the kind of cancer to which people refer as beastly” — but it could equally refer to the book itself, to the strength inherent in writing. “Is this why I have to write poems now?” Sharma asks. She acknowledges that her husband would have rejected some of her elegiac tendencies: “you won’t let me do any wayward effusive gestures that describe how you are mythic.” In this way, the collection is as much about writing about grief, as it is about the speaker’s particular grief. How does a poet memorialize her beloved without erasing his complexity? Sharma writes candidly of the elegized’s personality — “your death was as sudden as your rage” — and of her unanswered anxieties: “Did he tell the doctor he didn’t love me anymore and that’s why I wasn’t allowed into those conversations?” In doing so, Sharma complicates her narrative away from sentimentality and into reality-fracturing emotionality. What doesn’t break, however, are the poems’ lines; all but three are in a prose format, perhaps as a way to avoid artifice. The “natural world” Sharma creates in these poems is hermetically sealed, for good reason: “Self-containment suggests that it” — and the loved we’ve lost — “still can be everywhere.”

EYES BOTTLE DARK WITH
A MOUTHFUL OF FLOWERS

“Dear Brother,” a poem from Skeets’s revelatory debut, begins with the line “You kissed a man the way I do,” a statement that momentarily suggests communion between the gay speaker and his brother. But Skeets’s poetry is wilier, more harrowing than that. The line drops into its turn and shows the brothers at odds: “You kissed a man the way I do / but with a handgun. You called it; I’m the fag / we were afraid to know.” Throughout this book, Skeets challenges toxic masculinity with a queer coming-of-age narrative that’s knowingly reminiscent of D. A. Powell’s “Useless Landscape, or A Guide for Boys” — but distinctly oriented within Navajo culture and the landscape of Gallup, N.M. Boys there, Skeets writes, “are often the wind / always a howl” and “know becoming a man / means knowing how to become charcoal.” Masculinity leads to premature death, from violence or alcoholism. One elegized figure is Benson James, the poet’s uncle, whose portrait, taken by Richard Avedon in 1979, appears on the cover. Stabbed to death within a year of the picture, James becomes “a mirror / if I stare long enough,” Skeets writes. Can the speaker escape his uncle’s fate? The book’s triangulation between violence, self-destruction and desire leads Skeets to declare that “the closest men become is when they are covered in blood / or nothing at all.” By turns elegiac and erotic, the collection is also lush with language whose music evokes the landscape. This is one of the most accomplished and emotionally engaging debuts I have read, one that shows a man “unlearns how to hold a fist” by holding another man’s hand.

Emilia Phillips is the author of three poetry collections, most recently “Empty Clip.”