Don’t panic! Lie awake fretting? There’s no need. A new book debunks the top 58 worries — for a start, no asteroids are coming our way for 100 years

Worried? What a daft question. Of course you’re worried. Are you awake? Are you breathing? Did you leave the bath running?

Did you turn the oven off before you went out? Is this aeroplane going to fall out of the sky before it reaches its destination?

Will this burger/glass of red wine/Snickers bar kill me? Quickly or very, very slowly?

The longer I live, the more I wonder whether worrying just goes with the territory, and I can name at least two U.S. scientists who agree with me. 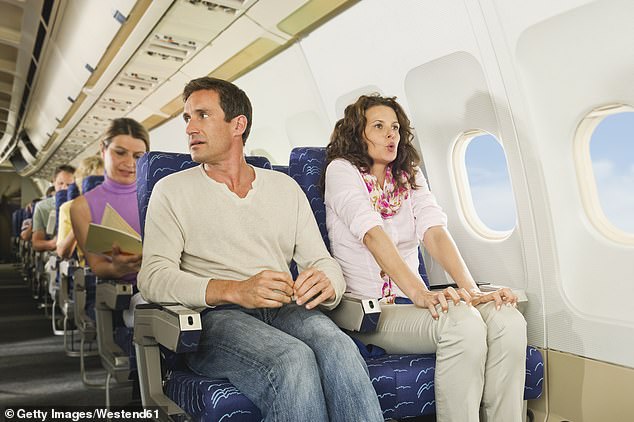 Scientists Lise Johnson and Eric Chudler, assess common worries including a fear of flying and the chances of catching a flesh-eating infection in a new book (file image)

Lise Johnson and Eric Chudler have had a brilliant idea and turned it into an equally good book. In 58 chapters, they take 58 things we worry about and assess scientifically exactly how dangerous they are.

Chapter 1 is called Caffeine. Chapter 25 is called Flesh-Eating Infection. Chapter 42 is Bees. Chapter 55 is Amusement Park Rides. If you’ve had to make yourself a cup of tea before reading any further, this could be the book for you. Each chapter is accompanied by an easy-to-understand graph. Along the X axis (the one at the bottom, from left to right), they measure the likelihood of each threat. Along the Y axis (on the left, from bottom to top), they measure preventability.

They then divide the graph into four equal squares. Three of them are not to be worried about, as the threat is either preventable or unlikely, or both.

The only quarter of the graph we do need to worry about is the one on the top right, where threats are both likely and unpreventable. Very few threats appear here. I find it curiously reassuring.

So, on caffeine, for example, the threat is minimal. Did you know that coffee is associated with a reduced risk of cancer, a reduced risk of type 2 diabetes and a ‘reduced all-cause mortality’? Or that tea is good for cardiovascular health and decreases cancer risk?

‘If you’re a healthy adult who isn’t pregnant and doesn’t have osteoporosis, you don’t need to beat yourself up about indulging in a few cups of coffee or tea every day.’ Time to put the kettle on. Johnson and Chudler are scientists and, therefore, take no nonsense from anyone. If there isn’t peer-reviewed, scientifically rigorous research on the matter, they’re not interested. 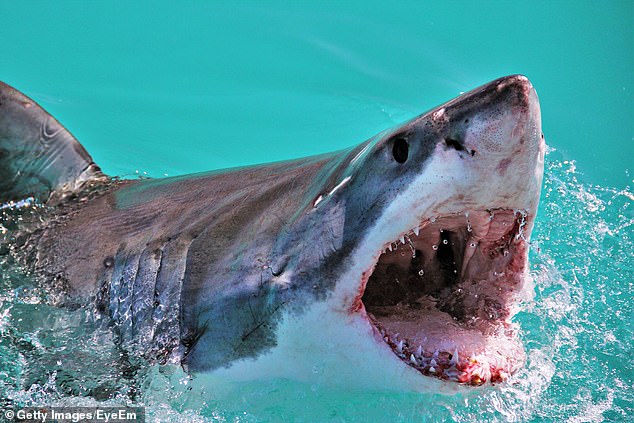 Since the early 1900s, the majority of shark attacks have involved men. Lise Johnson and Eric Chudler, advise targeting the sharks eyes and then gills if it tries to attack twice (file image)

Take Gluten (Chapter 5). I have non-coeliac gluten sensitivity, which means I get terrible bloating after a wholemeal sandwich. But this is anecdotal, not scientific.

They accept, grudgingly, that some people suffer in this way, but they don’t regard it as a major problem: ‘Most experts don’t believe that a gluten-free diet provides any real health benefits to most people. It is popular to hate gluten, but there isn’t a lot of scientific support for it.’

That’s me told. Most of the time, though, they put your mind at rest. One mild concern I’ve always had is going under general anaesthetic and then waking up during the operation.

One study surveyed 87,361 patients and asked how many of them had had any awareness or recall during their surgery. Only six had. Those seem decent odds to me.

Lifts are far, far safer than you could ever imagine. You’re unlikely to catch Ebola if you don’t live in West Africa. If you don’t work with asbestos, or live with someone who does, you’re very unlikely to develop mesothelioma (and more than half of people who do get it are over 75). 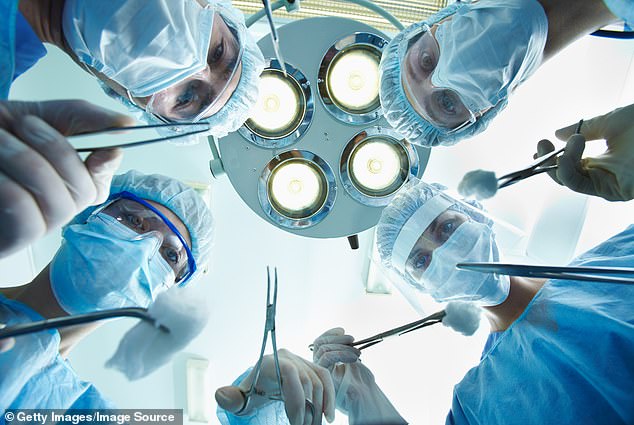 A study of 87,361 patients revealed just six of them had an awareness or recall during their surgery (file image)

There’s also some unexpected advice. When my partner was pregnant, we were told constantly that she shouldn’t smoke, drink, or eat unpasteurised cheese. What I didn’t know is that pregnant women shouldn’t change the cat litter, either.

Apparently, vast numbers of diseases can be transmitted by cat faeces. This really worried me, until reminded that, when our children were born, we didn’t own a cat.

The information keeps on coming. Though swimming in a public pool is one of the unhealthiest things you can do with your clothes off — it turns out that I am the only person in Western Europe who doesn’t regularly wee in the pool — the risks are low, and such infections as you might pick up will be trivial.

The main thing, say Johnson and Chudler, is not to swallow any of the water. The very thought.

Shark attacks are potentially rather worrying, although remarkably preventable. ‘If you want to avoid sharks,’ the authors advise, ‘stay out of the water.’ Or be female: of the 5,034 shark attacks since the early 1900s, men have been the targets of 80 per cent. 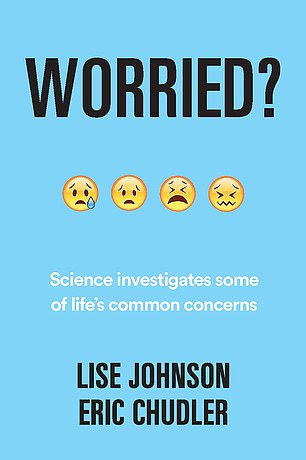 There are several steps you can take to improve your chances of survival. First, remain calm. Second, ‘if the shark comes back for another taste, then fight back, targeting the shark’s eyes and gills’. Best of all, though, is to ‘get out of the water as soon as possible’. Yes, I think we’d worked that one out already.

The 58 chapters are organised into sections including Food, Medicine, Environment and Animals — but my absolute favourite is the Miscellaneous section at the end, which is made up of Pirates, Toys Made In China and, best of all, Asteroid Strike.

Obviously, should we be hit by an asteroid, almost all life on Earth will immediately cease. Fortunately, ‘no asteroids of any significance have been detected that are on a collision course with Earth within the next 100 years’.

One less thing to worry about.

In fact, 58 less things to worry about. For anyone who worries too much, which is to say all of us, this is a deeply comforting book.