Home » Books » Essay: Should We Have War Crime Trials?

Essay: Should We Have War Crime Trials? SHOULD WE HAVE WAR CRIME TRIALS? by Neil Sheehan | Essay first published March 28, 1971

“The tragic story of Vietnam is not, in truth, a tale of malevolent men bent upon conquest for personal gain or imperial glory. It is the story of an entire generation of leaders (and an entire generation of followers) so conditioned by the tensions of the Cold War years that they were unable to perceive in 1965 (and later) that the Communist adversary was no longer a monolith. … Lyndon Johnson, though disturbingly volatile, was not in his worst moments an evil man in the Hitlerian sense. … Set against these facts, the easy designation of individuals as deliberate or imputed ‘war criminals’ is shockingly glib, even if one allows for the inexperience of the young.” — Townsend Hoopes, the former Under Secretary of the Air Force, January 1970.

Is the accusation glib? Or is it too unpleasant to think about? Do you have to be Hitlerian to be a war criminal? Or can you qualify as a well-intentioned president of the United States? Even when I saw those signs during the March on the Pentagon in 1967, “Hey, Hey L.B.J. How many kids did you kill today?” they didn’t make me think that Lyndon Johnson, the president of the United States, might be a war criminal. A misguided man perhaps, an egomaniac at worst, but not a war criminal. That would have been just too much. Kids do get killed in war. Besides, I’d never read the laws governing the conduct of war, although I had watched the war for three years in Vietnam and had written about it for five. Apparently, a lot of the men in Saigon and Washington who were directing the war didn’t read those laws either, or if they did, they interpreted them rather loosely.

Now a lot of other people are examining our behavior in Vietnam in the light of these laws. Mark Sacharoff, an assistant professor of English at Temple University, has gathered their work together into this bibliography. By this simple act he has significantly widened our consciousness. If you credit as factual only a fraction of the information assembled here about what happened in Vietnam, and if you apply the laws of war to American conduct there, then the leaders of the United States for the past six years at least, including the incumbent president, Richard Milhous Nixon, may well be guilty of war crimes.

The more perspective we gain on our behavior, the uglier our conduct appears.

There is the stuff of five Dreyfus affairs in that thought. This is what makes the growing literature on alleged war crimes in Vietnam so important. This bibliography represents the beginning of what promises to be a long and painful inquest into what we are doing in Southeast Asia. The more perspective we gain on our behavior, the uglier our conduct appears. At first it had seemed unfortunate and sad; we were caught in the quicksand of Indochina. Then our conduct had appeared stupid and brutal, the quagmire was of our own making, the Vietnamese were the victims and we were the executioners. Now we’re finding out that we may have taken life, not merely as cruel and stubborn warriors, but as criminals. We are conditioned as a nation to believe that only our enemies commit war crimes. Certainly the enemy in Indochina has perpetrated crimes. The enemy’s war crimes, however, will not wash us clean if we too are war criminals.

What are the laws of war? One learns that there is a whole body of such laws, ranging from specific military regulations like the Army’s Field Manual 27-10, “The Law of Land Warfare,” to the provisions of the Hague and Geneva Conventions, which are United States law by virtue of Senate ratification, to the broad principles laid down by the Nuremberg and Tokyo war crimes tribunals. These laws say that all is not fair in war, that there are limits to what belligerent man may do to mankind. As the Hague Convention of 1907 put it, “The right of belligerents to adopt means of injuring the enemy is not unlimited.” In other words, some acts in war are illegal and they aren’t all as obviously illegal as the massacre of several hundred Vietnamese villagers at Mylai.

Let’s take a look at our conduct in Vietnam through the viewing glass of these laws. The Army Field Manual says that it is illegal to attack hospitals. We routinely bombed and shelled them. The destruction of Vietcong and North Vietnamese Army Hospitals in the South Vietnamese countryside was announced at the daily press briefings, the Five O’Clock Follies, by American military spokesmen in Saigon.

So somebody may have committed a war crime in attacking those hospitals. The manual also says that a military commander acquires responsibility for war crimes if he knows they are being committed, “or should have knowledge, through reports received by him or through other means,” and he fails to take action to stop them. President Johnson kept two wire-service teletypes in his office and he read the newspapers like a bear. There are thus grounds for believing that he may have known his Air Force and artillery were blowing up enemy hospitals. He was the commander in chief. Did his knowledge make him a war criminal? The Army manual says that “every violation of the law of war is a war crime.”

Let’s proceed to one of the basic tactics the United States used to prosecute the war in South Vietnam — unrestricted air and artillery bombardments of peasant hamlets. Since 1965, a minimum of 150,000 Vietnamese civilians, an average of 68 men, women and children every day for the past six years, have been killed in the South by American military action or by weapons supplied to the Saigon forces by the United States. Another 350,000 Vietnamese civilians have been wounded or permanently maimed. This is a very conservative estimate. It is based on official figures assembled by Senator Edward M. Kennedy’s Senate Subcommittee on Refugees and on a study for the subcommittee by those eminent government auditors, the General Accounting Office. The real toll may be much higher. This conservative attitude makes the documentation put together by the senator and his staff aides, Jerry Tinker and Dale S. de Haan, among the most impressive in the bibliography. Many, perhaps the majority, of those half million civilian casualties were caused by the air and artillery bombardments of peasant hamlets authorized by the American military and civilian leaders in Saigon and Washington.

The United States government tried and hanged in 1946 a Japanese general, Tomoyuki Yamashita, because he was held responsible for the deaths of more than 25,000 noncombatants killed by his troops in the Philippines. 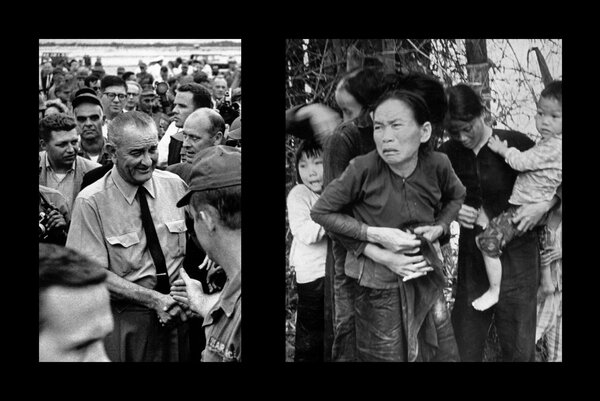 Can a moral and legal distinction be drawn between those killings in World War II, for which General Yamashita paid with his life, and the civilian deaths ordered or condoned by American leaders during the Vietnam War? Again, if you accept only a portion of the evidence presented in this bibliography, and compare that evidence to the laws of war, the probable answer is, No. And President Nixon has spread this unrestricted bombing through Laos and Cambodia, killing and wounding unknown tens of thousands of civilians in those countries.

Looking back, one realizes that the war crimes issue was always present. Our vision was so narrowly focused on the unfolding details of the war that we lacked the perspective to see it, or when the problem was held up to us, we paid no heed. This lesson becomes clear in reading the proceedings of the Russell Tribunal now published in “Against the Crime of Silence.” The proceedings were widely dismissed in 1967 as a combination of kookery and leftist propaganda. They should not have been. Although the proceedings were one-sided, the perspective was there.

One saw the substance all the time in Vietnam in the bombing and shelling of the peasant hamlets. In November 1965, I found five fishing hamlets on the coast of Quangngai Province in central Vietnam, not far from Mylai, which had been ravaged over the previous two months by the five-inch guns of United States Navy destroyers and by American and South Vietnamese fighter-bombers. The local Vietnamese officials told me that at least 184 civilians had been killed. After a day of interviewing the survivors among the ruins, I concluded that a reasonable estimate might run as high as 600 dead. American Army officers working in the province told me that the most serious resistance the Vietcong guerrillas in the hamlets had offered was sniper fire. The hamlets and all their inhabitants had been attacked just because the Vietcong were present. I discovered that another 10 hamlets in the province had also been gutted and about 25 others severely damaged, all for like reasons.

Making the peasants pay so dearly for the presence of guerrillas in their hamlets, regardless of whether they sympathized with the Vietcong, seemed unnecessarily brutal and politically counterproductive to me, since this Hun-like treatment would alienate them from the Saigon authorities and the American forces. No common-sense military purpose seemed to be served. When I wrote my story describing the agony of the fisher folk, however, it did not occur to me that I had discovered a possible war crime. The thought also does not seem to have occurred to my editors or to most readers of The Times. None of the similar stories that I and other reporters wrote later on provoked any outrage, except among that minority with the field of vision to see what was happening. As Lieutenant Calley told the prosecutor at Fort Benning, “It wasn’t any big deal, sir.”

Reading through the news dispatches from 1965, 1966 and 1967 that Seymour Melman of Columbia and Richard Falk of Princeton assembled to document accusations of war crimes made by the Clergy and Laymen Concerned About Vietnam, “In the Name of America,” is to view those scenes again in this new and disturbing perspective. Frank Harvey, in “Air War — Vietnam,” recounts with the power of anecdotal narrative the casual destruction of peasant hamlets in the Mekong Delta by the United States Air Force. Usually the excuse was that a squad or so of guerrillas might be present in the hamlet or the mere location of the hamlet in guerrilla-dominated territory. Harvey is a convincing witness because he concludes with a defense of the war.

You might argue that this destruction, and concomitant loss of civilian life, were not deliberate, that they were among those haphazard horrors of war. The record says otherwise.

As early as the fall of 1965, the American Embassy in Saigon distributed to correspondents a RAND Corporation study on the air and artillery bombardments. The study concluded that the peasants blamed the Vietcong when their hamlets were blasted and their relatives killed; in effect, that shrapnel, white phosphorus and napalm were good political medicine. The study was dismissed by reporters as macabre proof that the government could always find a think tank to tell it what it wanted to think.

Devastation had become a fundamental element in their strategy to win the war.