Home » Books » Examining the Fraught Subject of Guns and Police

Examining the Fraught Subject of Guns and Police

STANDOFF
Race, Policing, and a Deadly Assault That Gripped a Nation
By Jamie Thompson
320 pp. Holt. $27.99.

In July 2016, Micah Johnson told his mother he was headed to a Black Lives Matter rally in Dallas. He never returned. Five Dallas police officers also headed to the same rally. They never returned. Dallas, the city where one of the most beloved presidents in the history of the United States was assassinated by a former member of its military, was once again under siege.

In “Standoff: Race, Policing, and a Deadly Assault That Gripped a Nation,” Thompson, a journalist, chronicles the events surrounding Johnson’s killing of the five officers. In her ticktock, scene-driven account, she presents a cavalcade of characters and carefully constructed episodes, but too often she seems to be writing for the big screen rather than for readers. Still, the book is eerily prescient, documenting yet another moment of great social unrest that preceded the killing of George Floyd and the demonstrations of this year. In 2016 Dallas citizens protested police brutality. For their part, the Dallas police, who are brilliantly and exhaustively profiled in Thompson’s book, seem to have seen their work as brutal by necessity.

Thompson’s narrative provides multiple points of view. At the memorial for the five officers killed, for example, President Barack Obama also mentioned two Black men killed by the police that month, Alton Sterling and Philando Castile. Connecting losses of life, he spoke of the affection their friends and family had for them. But this irritated one of the Dallas officers involved in the conflict.

“He should not have said their names,” he insisted.

The key negotiator, a Black man who failed to talk Johnson down, overheard the remark and took umbrage. “Why?” he said. “Those are two people who died. They got killed. They have families, too. Philando Castile — he didn’t do a damn thing.”

Carlson, who teaches at the University of Arizona, examines how the National Rifle Association became a driving influence behind American policing for over a century, and emerges with the idea that policing America has not overcome its racially charged beginning. 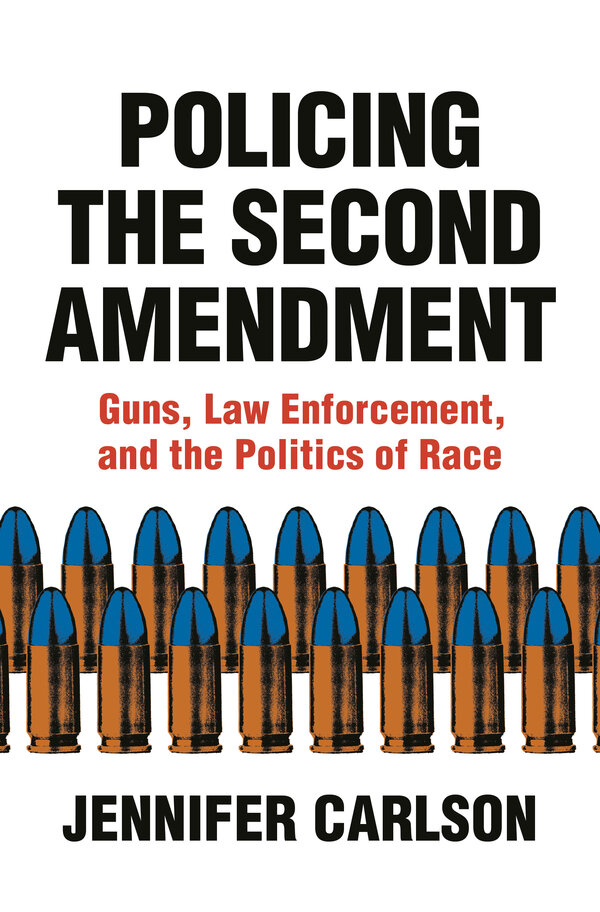 In 1916, the National Rifle Association began a push for police training in firearms and positioned itself at its center. In Oklahoma, where I live, the state’s law enforcement agency recognizes N.R.A. certification as proof that an individual is qualified to teach a course in concealed weapons, under the terms of the state’s Self-Defense Act. Earning N.R.A. certification was a crowning achievement for white American gun owners and police officers in an effort to contain men and women of color through what Carlson calls a “war on guns.”

She writes, “This war on guns is made possible by the prisms through which urban gun violence is viewed by the public and by police alike, one that delimits gun violence as a particular kind of problem and that racializes gun offenders as particular kinds of people. It is echoed loudly by gun rights advocates in the National Rifle Association, within police circles and beyond.”

In 2016, 51.3 percent of people convicted of gun crimes were Black, and one in three Black men have felony records. Carlson reframes police unions’ calls for gun control in the 1990s as an attempt for assurance that police forces would not be outgunned. She explains such calls were actually a means to create an environment that allowed for “gun militarism” — the need for the police “to disarm and overpower the enemy.”

In August last year a California Highway Patrol officer pulled over a driver for illegally using the car pool lane. The man had no license, no registration and was a felon. When the officer moved to begin the process of impounding the vehicle, the ex-con — a 49-year-old man named Aaron Luther — began firing a semiautomatic rifle.

When the shooting was over, at least one officer was fatally wounded and more than 100 rounds had been fired. Despite his having served 10 years in prison for second-degree murder, Luther had still managed to obtain a weapon. His was what law enforcement calls a ghost gun, or an “independently fabricated” small arm.

In “Ghost Guns: Hobbyists, Hackers, and the Homemade Weapons Revolution,” Tallman, who teaches homeland security at the Massachusetts Maritime Academy, describes the great changes brought about by the proliferation of these weapons. While people have been building homemade guns for many years, only as recently as 2001 have traditional media reported on their growing number and chief function: skirting law enforcement because they are untraceable. In fact, Tallman cites 2001 as the first time the term “ghost guns” was popularly used — in reference to a story about the Real Republican Irish Army converting flare guns so that they could fire live cartridges.

Tallman’s point is clear: The trend to create guns that state and federal governments cannot trace is growing. And while many journalists and policymakers are now chasing this story, the creators are busily sharing their knowledge. “It’s impossible to understand” this kind of gun-making “without understanding the technology behind it,” Tallman writes. “Ready or not, the Open Source Revolution is here.”