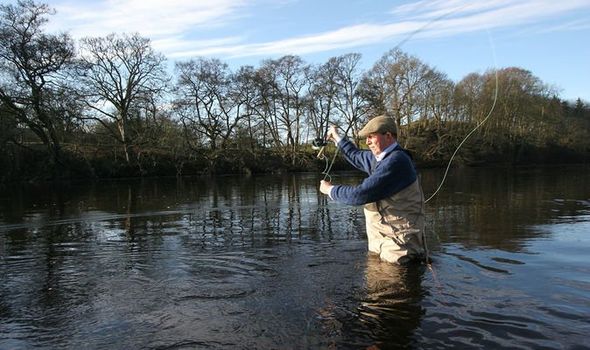 Late-blooming author Paul Torday was always amused when, following the success of his bestselling debut novel Salmon Fishing In The Yemen, British visitors made enquiries to tourism organisations asking about the country’s non-existent salmon fishing industry. The hit 2011 film adaptation, starring Ewan McGregor, Emily Blunt and Amr Waked, was a triumph for the writer, who published first book aged 59 having spent his working life in the oil and gas business.

A satirical novel about a fisheries expert recruited to help realise a sheikh’s “fundamentally infeasible” vision of bringing the sport of fly fishing to the Yemeni desert, was a literary sensation and a runaway bestseller.

It was inspired by Torday’s experience in the fuel business of the 1990s, coupled with an acute understanding of the insanity of much government bureaucracy.

Paul had sent the manuscript to an agent, then forgot about it and, six months later, discovered it had been the subject of a competitive auction between publishers vying to bring it out.

Reflecting today on his own journey into authordom, his son Piers Torday, 47, recalls how his father invited him to dinner, a rare occurrence, and then revealed his secret literary success.

“Dad was 59 and I was in my 30s. He said, ‘I’ve got a surprise’. You have to understand that my father was not a surprise person; he was modest and quiet and very funny. So I thought ‘What on earth is this?’

“He had recently remarried ‑ I wondered if something was wrong there? Was he running away to join a circus? Starting an organic llama farm?”

In the event, Piers nearly fell off his chair when his father revealed that over the past few months he’d written Salmon Fishing In The Yemen.

Not only that, but Paul revealed he had sold the book for a “ridiculous” amount of money and that it was going to become a Hollywood film too. “I was so proud of him. But this man… a whole new career. A lot of things suddenly made sense.”

For years, Piers himself had himself nursed secret thoughts of being a writer. His mother Jane opened a bookshop in their front room in Northumberland when he was a baby, and he had developed an early passion for reading.

“I grew up loving stories and with a strong sense that writing was of value, and important,” says Piers, now the creator of the award-winning The Last Wild trilogy. “But although my dad used to tell us stories all the time, as a way of making things more fun, he was a businessman who wore a suit and had a briefcase.

“He drove his car to work and came home looking exhausted.”

Following that example, Piers got a “proper” job in television believing that this was what was required. It was his father’s late change of career that finally inspired his own adventures in writing.

Encouraged by his father’s entirely unexpected global success, Piers went on a writers’ retreat and the idea for his own book series began to crystallise.

It took him four years to write The Last Wild, the first in his award-winning children’s trilogy ‑ all of which have become modern classics, read widely in schools. His prequel, The Wild Before, has just been published, six years after the final book was completed.

But as father and son both embarked on their belated literary quests, tragedy was looming.

“In 2006 he told me he’d written the book. It was published the next year, Two years later he called with bad news,” Piers says.

Paul had been diagnosed with cancer of the kidney. “He was very uncomplaining, he was writing constantly and had had this success and won awards, but he couldn’t enjoy it as much as he should. He kept news of his diagnosis very private.”

The Last Wild was published in March 2013. Paul died in December that year having spent his last years in a creative frenzy, writing seven more books.

“He lived to see some of the wonderful reviews of my book, and that I was shortlisted for awards,” recalls Piers.

“But my next book, the one that won the Guardian’s Children’s Fiction Prize, wasn’t published until the year after he died. He didn’t live to see me become a full-time writer, but I was glad he was able to see the start of the next phase of my life.”

In his dying days, Piers read The Hobbit to Paul, as his father had to him as a little boy. “Dad loved Tolkien, and was taught by him at Oxford. He used to tell us stories of him with a pipe, dispensing wisdom. The books meant so much to him,” says Piers.

“I remember him doing different voices for spiders and for dragons, and awakening in me the power of those fantasy worlds – the hero discovering his amazing inner strength. It set me off on a world of adventure. But I also associated it with real moments of intimacy ‑ he was away a lot or immersed in his work files, but The Hobbit came out when we were tucked up in bed.”

Since his father’s death aged 67, Piers has pieced together not only his father’s unfinished last, novel ‑ The Death Of An Owl, published in 2016 ‑ but also the threads that explain his father’s life.

“I think on a deep, subconscious level he was frustrated. There were drawings and cartoons in his letters to me that showed how creative he was. He was successful in business, but it made him stressed and led to my parents’ divorce.

“He didn’t strike me as a frustrated novelist, but it’s only now that I realise ‑ many years later and knowing more of the story about his writing and his ambitions ‑ what a huge sacrifice he made. He gave up his writing ambitions to give my brother and I a wonderful childhood. And I do wonder, if he had been a novelist while I was growing up, if I might have become a lawyer or an accountant instead?

“By wanting to be a writer ‑ something he was worried would not bring me security, but was himself doing secretly ‑ I thought I was rebelling against him. But his first book showed me the expression of his inner mind; a sense that writing is not only something you are allowed to do, but something that is in your bones as well…”

Piers’ prize-winning series ‑ The Last Wild, The Dark Wild and The Wild Beyond ‑ is set in a dystopian future where a mysterious virus has wrought havoc.

It centres around a little boy called Kester who can’t talk to people, but can talk to animals. “It was my response to a lot of things – including a delayed reaction to the first pandemic of this century: Foot and mouth,” says Piers.

As movement controls for animals were put in place, and the “awful slaughter” by the Army of up to 100,000 animals a week began, he found himself profoundly affected.

“I’d grown up in Northumberland alongside farming and wildlife, and there was something so stark and startling about the scale of that slaughter. I found myself wondering what we were doing? I read a report that showed an epic decline of 60 percent of wildlife since my birth.

“I didn’t want to lecture or preach to children about climate change, but I did want to engage them emotionally so that they cared. But then the [three-part] story came to an end. I’d said my piece.”

However, with the arrival of Greta Thunberg “speaking truth to power”, Piers found himself moved to write something even more urgent.

“The bravery and single-mindedness of this young person moved me. As someone who writes for young people you always hope to inspire them. She didn’t read my books, but she inspired other young people.

“I realised that when I wrote the trilogy, climate change was in the background. Now it has become a pressing issue which my readers are living through. She said the world is on fire and no one is paying any attention. It’s no longer in the future.”

He decided to go back to a time before the dystopian future in which the trilogy was set and write a story that reveals that what we have now is beautiful, precious and fragile.

“I wanted to reveal how the world in the later books had come about. Children love to be let in on secrets and mini-truths,” he explains.

He describes it as Animal Farm ‑ George Orwell’s classic metaphorical novel about a totalitarian regime ‑ “but for children, and with a message of hope”, adding: “My point is that when you have terrible events, wouldn’t it be wonderful if there was a solution? One of the reasons we read fiction is to make sense of the randomness of our lives and to put it in some sort of order.”