For an Immigrant Family, Sarajevo Still Casts Its Shadow

MY PARENTS
An Introduction

THIS DOES NOT BELONG TO YOU
By Aleksandar Hemon

Depending on how you read this two-part book by Aleksandar Hemon, you’ll either be going from a concrete account to disarray, or watching the threads of memory come together into a single story. The second work of nonfiction from the Sarajevo-born novelist, the book is split into two halves — “My Parents: An Introduction” and “This Does Not Belong to You” — that proceed inward from the front and back covers, necessitating a flip upside down midway through. They can be read in either order and are both linked and separate, like two parents or two countries at war.

I started with “My Parents,” a sensitive and absorbing account of the author’s mother and father from their life in Sarajevo through their move to Canada during the Bosnian war. Hemon creates thoughtful portraits of his parents: his mother, who struggled to reconcile the lessons of socialist equality with the expectations of a patriarchal society, and his garrulous, beekeeping father, whose stories inspire and frustrate his son.

Hemon probes the way nationalism can structure ways of thinking and even lives. His mother was born into an ethnically Serbian family in what was then the kingdom of Yugoslavia. Socialist Yugoslavia, built around the charisma of authoritarian leaders, grew during her adolescence. She enlisted in the youth crews that constructed the country’s infrastructure. “She built the country as she was building herself,” Hemon writes. The death of Josip Broz Tito, Yugoslavia’s dictator, and the violent dissolution of the country, shattered her political ideology. When she moved to Canada, “she lost, figuratively and literally, everything that had constituted her as a person.” In contrast, the family of Hemon’s father, or “Tata,” emigrated to Bosnia from Galicia, in what is now western Ukraine, in the early 20th century. As he moves farther from Bosnia, Hemon’s father turns to Ukraine as a lost home and origin point. In Canada, he socializes with members of the Canadian Ukranian community, which supported the couple during their forced displacement. But “the price was contracting a certain troubling amount of nationalist rhetoric, mythology and politics.” He spends much of his time singing Ukrainian songs, watching Ukrainian-language television and discussing the political situation in the country, which he has only visited once since it achieved independence in 1991. “Our history,” Hemon observes, “is the history of unassuageable longing for the home that could never be had.” 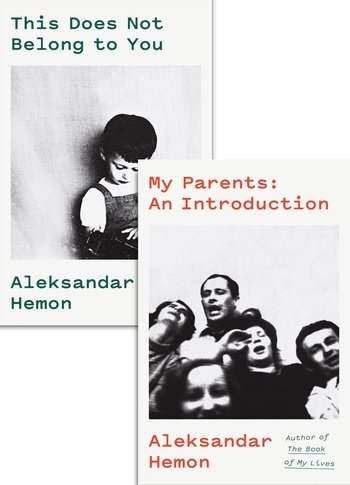 Hemon gestures to today’s boiling nationalism in both Europe and the United States, though these concerns never pierce the surface of the book. “The bad guys won in Yugoslavia and ruined what they could, as soon as they could; the bad guys are presently doing pretty well in the United States. But nothing is inevitable.” Many centuries of history and conflict hide within the phrase “bad guys.” Hemon focuses instead on the aftereffects of forced displacement, how the need to leave one’s country continues to unsettle, years after relocation. His father once told him that it was family truth that one couldn’t live for 50 years without experiencing war, a thought woven into the ideology of the former Yugoslavia. “We must live as though peace will last for a hundred years, and be ready as though war will start tomorrow,” Tito used to say. Hemon’s parents spend much of their time caring for their home, looking after bees and cooking Balkan foods, projects that don’t ease their survivalist instincts. When Hemon’s parents spend time with his in-laws, who are African-American, his father has an awkward conversation with Hemon’s wife: “Tell me about your family. What bad happened?”

“This Does Not Belong to You,” the book’s other volume, is arranged like a scrapbook. In short vignettes about his childhood, Hemon probes his memories and his ability to reliably relay them. “Why revisit memories?” he asks. “Why the word ‘revisit’? When did I visit memories for the first time?” Recounting the story of a childhood bully and his own momentary transformation into a schoolyard threat, he writes that there is no word for “bullying” in Bosnian. “This story is thus inescapably an approximation of what happened.” (Hemon’s generous translation and elucidation of Bosnian words is one of the consistent delights of his work.)

Sometimes I had the impression that the ideas on the page were still forming, finding their way into thought. But in its contradictory nature, its lack of interest in settling on a single form or account, the book prevents the creation of a narrative that could be used by someone else. In a world that demands of every migrant a story that justifies his or her arrival, Hemon’s book keeps these memories within his own private language, for his purposes alone.

Describing trips to Sarajevo after years of absence, Hemon notes the oddness of returning to his family’s old apartment, simultaneously real and remembered. He sees traces of a recognizable past, like a stain on the floor where he once dropped a bottle of milk. But the apartment lacks the smell and activity of human life. “I loved that emptiness, because, each and every time, we’d refill it with ourselves,” he writes. “Within a moment, there would be everything, because we were there, and there was a here that belonged to us, that was us.”

Madeleine Schwartz is a regular contributor to The New York Review of Books. She won the 2019 European Press Prize for opinion writing.

MY PARENTS: An Introduction/THIS DOES NOT BELONG TO YOU
By Aleksandar Hemon
Illustrated. 368 pp. MCD/Farrar, Straus & Giroux. $28.