Former Eton headmaster reveals how to survive struggles of adolescence

Teens have been annoying since the dawn of time! Former headmaster of Eton and a psychiatrist reveal how to survive the struggles of adolescence

ADOLESCENCE: HOW TO SURVIVE IT

‘Our youth now love luxury. They have bad manners, contempt for authority; they show disrespect for their elders and love chatter in place of exercise; they no longer rise when elders enter the room; they contradict their parents, chatter before company, gobble up their food and tyrannise their teachers.’

Have you any idea who wrote that? Was it a newspaper columnist 20 years back? Or a huffing Tory politician 200 years ago? You’d be wrong both times. The words come from the Greek philosopher Socrates — articulating the perennial moans of an older generation, all of 2,000 years ago.

Times change, but everything remains the same. 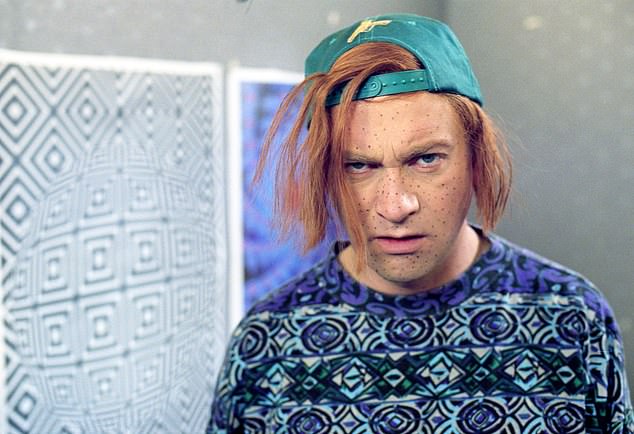 An early surprise in Tony Little Herb Etkin’s book is the definition of adolescence. Forget the horribly hilarious ‘Kevin’ (pictured) stereotype of Harry Enfield fame as it seems adolescence can kick in before 13 (even as early as nine)

Teenagers, for example . . . Perhaps you remember them lying in a messy bedroom until lunchtime, rising only to greet you with a sullen stare — or a snarl that you never understand . . .anything . . .evah!

Maybe you quietly mourned that sweet little boy or girl who played and chatted happily when family life was fun. Until the hormones kicked in and your baby morphed into a teenage monster.

Is there a parent out there who doesn’t know what I’m talking about?

According to experienced former headmaster of Eton and respected educationist Tony Little and psychiatrist Herb Etkin, ‘antiquity seems littered with references to the failings of the young’. 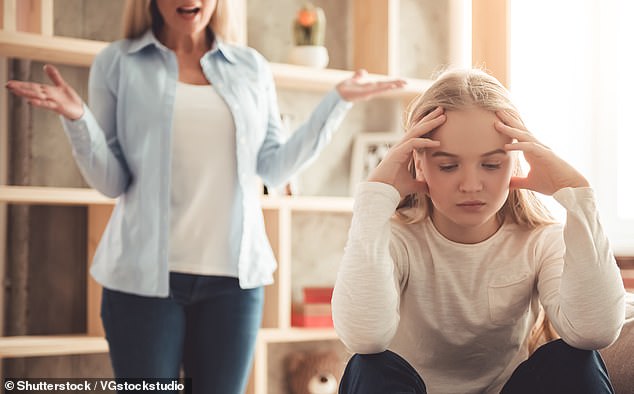 The authors’ method is suitably relaxed and conversational. Literally. The chapters mostly take the form of exchanges between Little and Etkin (file picture)

So maybe it’s time to stop complaining and try to understand.

‘Rites of passage’ may differ from culture to culture, yet that awkward stage when children gradually turn into adults, easing themselves away from parental control and finding their own role or ‘tribe’ — this, with all its difficulties, is universal.

That’s why this handbook will be useful for anybody interested in what makes teens tick. As we should all be. These young people are the future.

The authors’ method is suitably relaxed and conversational. Literally. The chapters (Parenting, Sexuality, Emotional Turbulence, etc) mostly take the form of exchanges between Little and Etkin, so the effect is like eavesdropping on two people who know a lot more than you do. It is very accessible and effective. 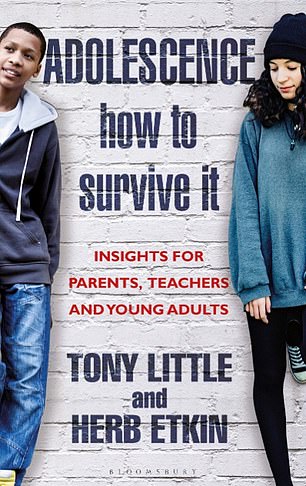 ADOLESCENCE: HOW TO SURVIVE IT By Tony Little and Herb Etkin (Bloomsbury Continuum £16.99, 256 pp)

An early surprise comes in the very definition of adolescence. Forget the horribly hilarious ‘Kevin’ stereotype of Harry Enfield fame — suddenly changing on his 13th birthday.

It seems adolescence can kick in before 13 (even as early as nine) ‘and certainly extend well beyond the teenage period, particularly in the case of boys’. One recent piece of research found that men can remain mired in adolescence until around 28. So that explains it!

It was a relief to find the authors share my view of the extended adolescence of students — often an excuse to do little useful while getting into debt.

They note the difference between those who, because of college and university, remain fixed within their peer group and those who take up apprenticeships and are therefore compelled to interact with ‘mature adults’.

At the same time, the authors leave us in no doubt that, thanks to social media, our young people are subject to ‘outside forces’ as never before.

With all the authority of his psychiatric practice, Etkin says: ‘I can’t emphasise enough how rapidly all this is changing and how frightening it is for adults.’

The chapter Screenagers draws attention to the ‘marked increase in loneliness . . . linked to an upsurge in the incidence of depression’. It also points out the dangers of social media algorithms that tend to imprison teens within their own echo chambers, thus limiting debate and tolerance. 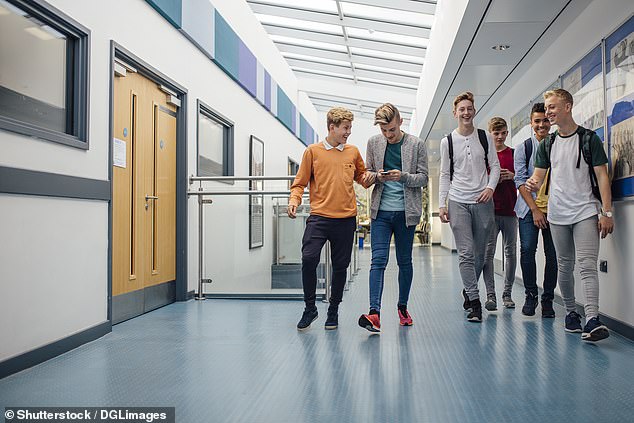 The authors also noted the difference between those who, because of college and university, remain fixed within their peer group and those who take up apprenticeships and are therefore compelled to interact with ‘mature adults’ (file picture)

And it is thoroughly depressing to read that a 2018 study found ‘40 per cent of 11-year-olds now have vocabulary so limited that it is affecting their overall learning’. Why? Because online activity doesn’t require many words.

Packed with information on addictions, social media, eating disorders, myriad problems within family life, and (of course) sexuality, this book is an invaluable addition to the parental armoury.

Does that sound aggressive? I don’t think so. Having survived the adolescence of my two (and still bearing some scars!), I tend to advise young parents to expect the worst, then it won’t come as a surprise.

Even if a particular problem doesn’t affect your very own ‘Kevin’, it might well worm its way into your family through peer groups, cousins and so on.

Awareness is the key — as well as the passionate conviction that our role as adults is to help these ugly ducklings we love so much develop ‘care and compassion’ and ‘curiosity and creativity’ — in order to take their essential places within society.