Home » Books » From Shooting Stars to tales from the riverbank: Bob Mortimer

From Shooting Stars to tales from the riverbank: Bob Mortimer From Shooting Stars to tales from the riverbank: Bob Mortimer was one half of a wildly successful comedy double act – until a heart scare saw him form a joyously gentle new TV friendship

And Away… The Autobiography by Bob Mortimer (Gallery £20, 336pp)

The first time you see Vic Reeves and Bob Mortimer on television, you have the same reaction as everyone else. Is this actually funny? And once you have decided that it is, you ask yourself, why is this actually funny? Finally comes stage three: who cares why it is funny? Vic and Bob clearly don’t care, so why should anyone else?

Humour needs no analysis, which may be why so many clever people don’t take it seriously. Reeves and Mortimer’s comedy is often described as ‘surreal’, but Mortimer rejects this label in his highly readable memoir: he prefers ‘silly’, which seems right to me. 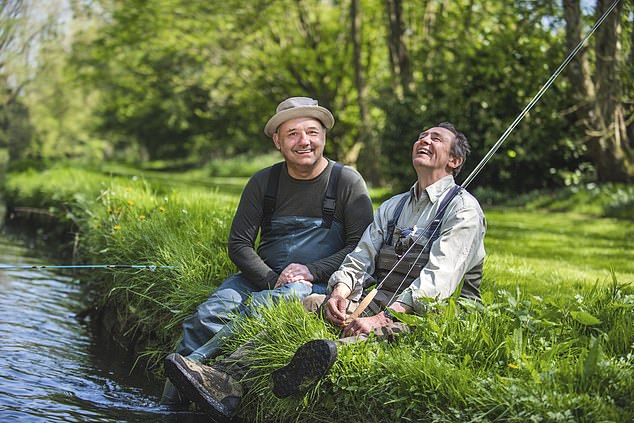 Putting the world to rights: Bob Mortimer and Paul Whitehouse

Who else would ask, as a quiz question: ‘True or false: Cliff Michelmore’s favourite harness was made of meat?’ Or come on stage as The Man With The Stick, holding an enormous stick with a plastic bag stuck on the end, empty because Mortimer had forgotten to put anything inside it? The audience would shout: ‘What’s on the end of the stick, Vic?’ And Mortimer, naturally enough, would refuse to tell anyone. It became a regular joke.

As a child, though, in Middlesbrough, Mortimer was cripplingly shy and lonely, unable to make friends in the usual fashion and hideously incapable of talking to girls. His father died in a car accident when he was seven and, although he barely remembers him, he thinks that the loss of his dad ‘was the single most defining moment of my life’.

He had trained as a solicitor and was working in London when a friend invited him to a pub to see something called Vic Reeves Big Night Out. Mortimer was entranced. ‘I felt like I’d seen the past, the present and the future of comedy. It was right up my street, even though I had never walked its pavement before.’

Dragged up on stage to help out with a sketch, Mortimer rapidly became an integral part of the entertainment, and Reeves and Mortimer morphed into the double act that we know and love today.

Interwoven through the first half of the book is the discovery, in October 2015, that Mortimer’s heart was in real trouble and he was going to need triple-bypass surgery. As he points out, this is almost a routine procedure today, unless you are the person undergoing the surgery and you then have to recover.

The whole experience seems to have made him much more ruminative and reflective, and it’s notable that while the first half of the book is full of jokes, many of them very funny indeed, the gag per page count falls off sharply in the second half. 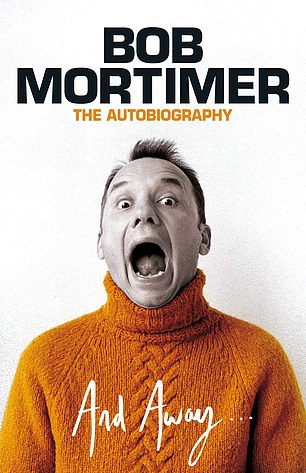 And Away… The Autobiography by Bob Mortimer (Gallery £20, 336pp)

I have written books like this that have changed in the writing: you set out to do one thing and you find yourself doing something quite different. It certainly seems that something like this happened with And Away . . .

What comes over very strongly from the book is Mortimer’s sheer likeability. Niceness is a rare and undervalued commodity in public life, but Mortimer is unfailingly fair and generous about his friends and collaborators, especially Vic Reeves (real name Jim Moir), whose flights of fancy and unflagging comic invention still make him laugh like a drain. (When they are writing together, if they both laugh at something, it goes in; if only one of them laughs, it’s rejected.)

Mortimer says they have never had an argument, and you can believe it: the warmth between them is one of their strengths as a double act. The only person he is ever harsh about is himself. When Reeves and Mortimer starred in the BBC’s remake of Randall & Hopkirk (Deceased), it is probably fair to say that Mortimer’s lack of acting chops were summarily exposed, although probably not fair to say it as often as he does.

‘I don’t think that Charlie [Higson] had factored in, when writing the script, the possibility that I couldn’t act, and that my skills went no further than the little skits I performed in our sketch shows and Shooting Stars.’

It’s probably fairer to say that since his brush with mortality, Mortimer has come into his own. There is this book, which is a triumph. There is his wonderful series with Paul Whitehouse, Gone Fishing, in which two old geezers go fishing for a day and talk about life, the universe and everything, while Mortimer falls over a lot. He thinks this is because he doesn’t have any fishing kit of his own and borrows it all from Whitehouse.

‘His wading boots are about three sizes too big for me and sometimes it feels like I’m walking along with boots full of mice.’

He says the show feels like ‘the culmination of my journey from sidekick Bob to stand-alone Robert. I could never have got there without my heart nonsense. It has made me a more rounded, more enthusiastic person who has regained some ambition and verve.’ He then ‘humbly thanks [his] cloudy arteries for this unexpected development’.

I think my favourite aspect of later Mortimer is his remarkable appearances on the panel show Would I Lie To You?, which he cheerfully subverts with modesty and great skill.

On this show you tell a story of something bizarre that has happened to you and the opposing team have to decide whether you’re telling an unlikely truth or spinning a giant yarn. (Mortimer’s tales are collected together on YouTube, and definitely worth an hour of your time.)

The best was the one in which Mortimer managed to convince David Mitchell, no fool, that ‘following advice from the growly singer Chris Rea, I always crack a raw egg into my bath’. Total drivel, of course, but described with such charm and humour that part of me still wonders whether or not it did happen after all.

When Rea appeared as a guest star on Gone Christmas Fishing in 2020, he presented Mortimer with a large, framed photo of himself in a bath full of poached eggs.

And Away . . . is as good a celebrity autobiography as you could hope to read, and enthusiastically recommended.