In “The Turner Diaries,” a group of white supremacists attacks the Capitol in an effort to overthrow the U.S. government. Dozens are killed in the assault, including members of Congress and their staffers. But in the insurrectionists’ view, the greater victory is symbolic.

“The real value of all our attacks today lies in the psychological impact, not the immediate casualties,” the 1978 novel’s narrator, Earl Turner, writes in his diary. “They learned this afternoon that not one of them is beyond our reach.”

Since its publication by the neo-Nazi leader William Luther Pierce, “The Turner Diaries” has become one of the most influential texts among white nationalists and right-wing extremists. It has inspired dozens of acts of violence, and has been held up as a blueprint for how to enact a violent insurrection.

Last week, as rioters broke into the Capitol, incited by President Trump, some saw frightening parallels with the events described in the novel. Experts who track rhetoric on the far right say the book has long been a reference point for white supremacists who see the government as an oppressive force to be overthrown.

“Many of the ideas that are central to ‘The Turner Diaries’ have turned into memes and proliferated online in right-wing media,” said Cassie Miller, a senior research analyst at the Southern Poverty Law Center. “There are books that are required reading for people who are enmeshed in the movement, and ‘The Turner Diaries’ is at the top of the list.”

On social media and in militant chat rooms on sites like 4chan, Telegram and Stormfront, some users celebrated last week’s violence and likened it to “the Day of the Rope,” a mass hanging that occurs in “The Turner Diaries.” Some rioters who live-streamed the assault made references to hanging politicians, and strung up nooses and erected a gallows outside the Capitol.

“The turner diaries mentioned this. Keep reading,” one user posted on Telegram in reference to the attack on the Capitol. 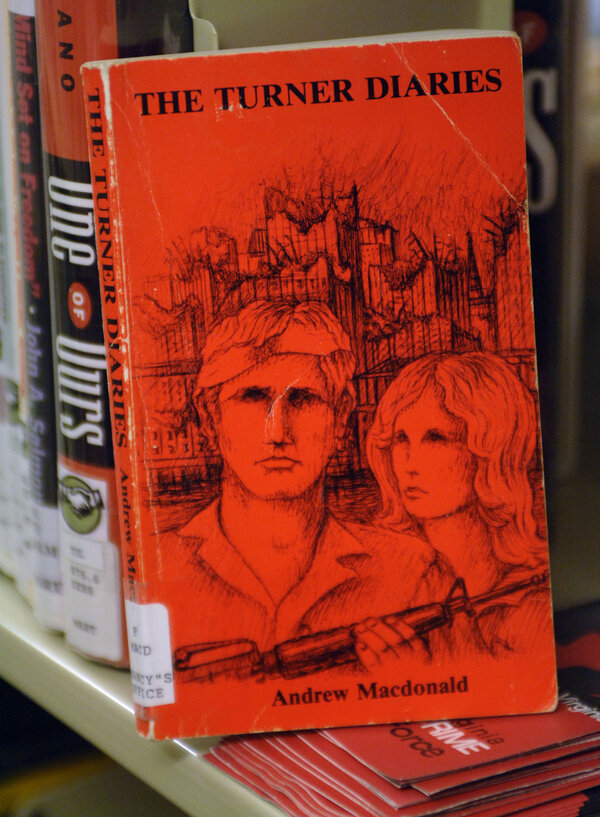 On Monday, Amazon removed the novel from its website. It had previously been available for purchase with a disclaimer identifying it as “a racist, white supremacist fantasy” that had inspired domestic terrorists.

“As a bookseller, we think it is important to offer this infamous work because of its historical significance and educational role in the understanding and prevention of racism and acts of terrorism,” the note said. The book also disappeared from Abe Books, a used and rare books site owned by Amazon.

Amazon — which also removed QAnon products and books from its site and suspended Parler from its web service — declined to comment on why it had taken down “The Turner Diaries.”

Part of the book’s appeal to right-wing radical groups stems from its seemingly far-fetched plot, in which a small group of insurgents terrorizes the most powerful people in the world with attacks that rally other white people to the cause. Though it’s a work of fiction rather than an ideological treatise or tactical manual, many domestic terrorists have tried to emulate the attacks in the book.

Over the decades, the novel has been cited as inspiration in at least 40 terrorist attacks and hate crimes, including the 1995 Oklahoma City bombing, according to J.M. Berger, a researcher and analyst who studies extremist activities in the United States.

“We see a lot of cases where people have taken some element of the book and tried to play them out,” Berger said. “‘The Turner Diaries’ is part of the background noise that created this moment.”

Fiction has often fed into right-wing propaganda movements, said Seyward Darby, author of “Sisters in Hate,” a book about women in the white nationalist movement. In addition to “The Turner Diaries,” influential right-wing novels include Jean Raspail’s “The Camp of the Saints,” a dystopian depiction of immigrants overrunning Europe, and “Hunter,” another novel by Pierce that valorizes a white supremacist who targets interracial couples and civil rights activists.

“Before the internet, that was how they disseminated a lot of information,” Darby said. “What you’ve seen is a lot of these texts finding new life online.”

Pierce, a physicist who grew up in Texas, was radicalized in the 1960s, and he joined the American Nazi Party. He later formed his own group, the National Alliance, which called for an all-white homeland and the genocide of Jews and other races. Pierce led the organization until his death in 2002, but his lasting influence took hold through his fiction.

From Riot to Impeachment

The riot inside the U.S. Capitol on Wednesday, Jan. 6, followed a rally at which President Trump made an inflammatory speech to his supporters, questioning the results of the election. Here’s a look at what happened and at the ongoing fallout: