Hunter Biden doesn’t beat around the bush in his new memoir, “Beautiful Things,” which comes out on April 6.

“I’m a 51-year-old father who helped raise three beautiful daughters,” writes President Biden’s younger son, who now has a year-old son of his own, in the prologue. “I’ve bought crack cocaine on the streets of Washington, D.C., and cooked up my own inside a hotel bungalow in Los Angeles. I’ve been so desperate for a drink that I couldn’t make the one-block walk between a liquor store and my apartment without uncapping the bottle to take a swig. In the last five years alone, my two-decades-long marriage has dissolved, guns have been put in my face, and at one point I dropped clean off the grid, living in $59-a-night Super 8 motels off I-95 while scaring my family even more than myself.”

The book is equal parts family saga, grief narrative and addict’s howl. Here is what readers will learn.

He remembers the accident that killed his mother and sister.

You probably know the story: It was Dec. 18, 1972. President Biden, then a newly elected senator, was in Washington. Neilia Hunter Biden — referred to as “my mommy” throughout “Beautiful Things” — took Hunter, who was 3; his brother, Beau, almost 4; and their 13-month-old sister, Naomi (known as “Caspy,” short for Casper the Friendly Ghost), to pick out a Christmas tree near their home in Wilmington, Del.

Hunter Biden describes how Naomi was “sound asleep in the front passenger seat tucked into a bassinet” — an eyebrow-raising detail by today’s standards. “Suddenly, I see my mother’s head turn to the right,” he writes. “I don’t remember anything else about her profile: the look in her eye, the expression her mouth. Her head simply swings.” At a four-way intersection, their car was broadsided by a tractor-trailer carrying corncobs. 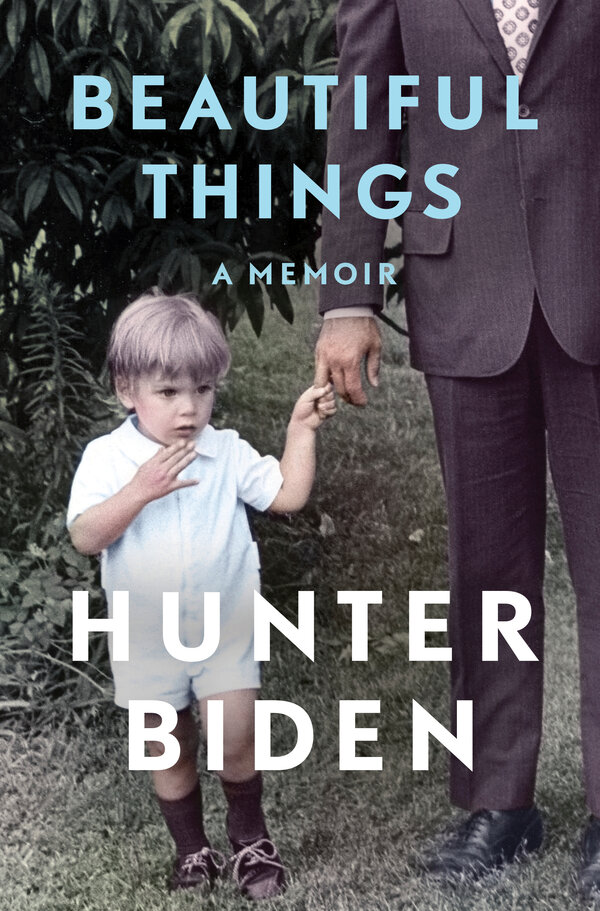 His romantic relationship with Beau’s widow stemmed from ‘grasping for the love we had both lost.’

What began as a “shared-travails bond” with Hallie Biden blossomed into a full-blown, live-in arrangement as Hunter Biden’s own marriage ended. He attempted to be a stable presence for his niece, nephew and sister-in-law, but acknowledges that none of it worked out.

“Our relationship began as a mutually desperate grasping for the love we had both lost, and its dissolution only deepened that tragedy,” he writes. “It made the obvious clear: What was gone was gone permanently. There was no putting Humpty Dumpty back together again.”

While his father was vice president, Biden spent a month in a Washington apartment bingeing on vodka.

Biden had his first glass of champagne when he was 8. In his 20s, he started drinking heavily after work (“I could always drink five times more than anyone else”). He went to rehab and relapsed after seven years — not long after his father joined the Obama ticket, effectively ending his son’s lucrative lobbying career. Biden went back to rehab again, then relapsed in 2016 after Beau died.

The pattern continued, leading to 12- to 16-hour benders, withdrawal symptoms and a 20-pound weight loss: “I didn’t eat anything much beyond what was available at the liquor store: Doritos, pork rinds, ramen noodles. Eventually my stomach couldn’t even handle the noodles.”

Biden used a kitchen knife to remove the plastic nub that regulates the flow of vodka from its jug, allowing him to guzzle faster. He writes, “I learned to twist and contort my body in such a way as to lessen the weight of the bottle, to make it more manageable.”

His father, who was then vice president, arrived at his home and said, “I know you’re not fine, Hunter. You need help.” Hunter Biden recalls: “He never let me forget that all was not lost. He never abandoned me, never shunned me, never judged me, no matter how bad things got — and believe me, from there they would get much, much worse.”

He purchased crack from a homeless addict who later moved in with him.

“The relationship was symbiotic,” he writes. “It was two crack addicts who couldn’t find their way out of a paper bag. A one-act crack farce.”

Biden bluntly describes his progression from smoking crack to cooking it; his abusive relationships with unsavory dealers and sticky-fingered hangers on; and the desperate tricks he used when faced with drug tests, including buying “clean urine.” He attempted to quit crack with the help of ketamine infusions, psychoactive compounds and 5-MeO-DMT therapy, “which employs the gland secretions of the Sonoran Desert toad.” He doesn’t disclose how he paid for these treatments.

“Once you decide that you’re the bad person everyone thinks you’ve become, it’s hard to find the good guy you once were,” Biden writes. “Eventually, I quit looking for him: I decided I wasn’t the person everybody who loved me thought I was anymore.”

Readers follow Biden weaving through a Los Angeles homeless encampment, looking to score his next hit. “I went through and stepped around people curled up on thin pieces of cardboard. Beyond them, I noticed a tilting, unlit tent. It was pitch black. All I saw was the gun pointed at my face,” he writes. In the next chapter, we see Joe Biden chasing his son down the driveway after a family intervention: “He grabbed me, swung me around and hugged me. He held me tight in the dark and cried for the longest time.”

Biden doesn’t make excuses for his addiction, but describes feeling ‘alone in a crowd.’

Of the car accident that killed his mother and sister, Biden writes, “I want to make it clear: I don’t see that tragic moment as necessarily resulting in behaviors that lent themselves to addiction. That would be a cop-out.”

But he describes a long-running feeling of unease, particularly in social situations. “That kind of insecurity is almost universal among those with real addiction issues — a feeling of being alone in a crowd. I’ve always felt alone in a crowd,” he writes.

When it comes to Ukraine, Biden’s account is as dry as toast.

Hunter Biden’s first “legal-age employment” was at Wilmington’s Brandywine Zoo — “I shoveled piles of llama manure as tall as I was and unclogged the drain in the otter pool” — but he is best known for his board membership at Burisma Holdings. “The episode that led to the impeachment of a president and landed me in the heart of the decade’s biggest political fable is most remarkable for its epic banality,” he writes.

He then proceeds to cover the incident in an 18-page chapter that reads like a research paper compiled by a reluctant student. Was Biden appointed to the board because of his last name?

Perhaps, he writes, but: “My response has always been to work harder so that my accomplishments stand on their own.”

Did he display a lack of judgment? “No.”

Would he do it again? “I did nothing unethical, and have never been charged with wrongdoing.”

He credits his wife, Melissa Cohen, for his sobriety.

In March 2019, Hunter Biden was “done with the world of politics, of figuring out how to go out on the campaign trail with Dad, if it came to that, as I would have in any other election year.” He writes, “I was a crack addict and that was that.”

He had been asked to vacate a hotel in Los Angeles where he was living, but before he left, he befriended some people at the pool who gave him the number of a South African filmmaker named Melissa Cohen.

An hour into their first dinner, they declared their love to one another. An hour after that, Biden told Melissa he was a crack addict. She said, “Not anymore. You’re finished with that.”