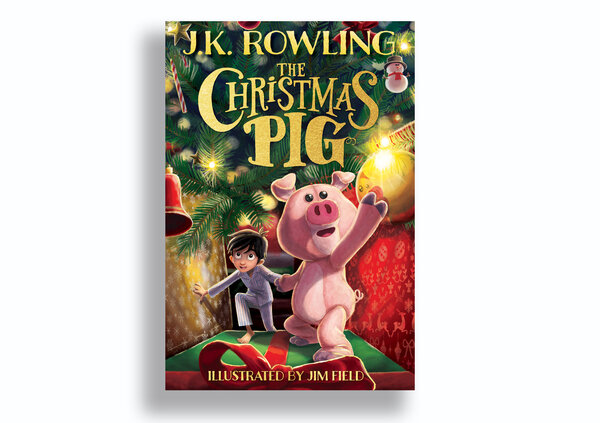 THE CHRISTMAS PIG
By J.K. Rowling
Illustrated by Jim Field

Neither words nor images, as the best storytellers have always known, can match the exuberant strength of a willing reader’s imagination.

J. K. Rowling gave a virtuoso demonstration of the truth of that premise in her most recent book. “The Ickabog,” a pandemic project, describes the mythical transformation of a harmless herbivore, the bashful Ickabog, into a man-eating monster, whose imagined powers are turned to evil use by his self-proclaimed adversaries, the cunning courtiers of a credulous and vain, but not incorrigible, king. Invited to add their own illustrations to Rowling’s vivid text, young readers excelled themselves when picturing the terrifying marsh-dweller. (“Huge it is, with eyes like lanterns and a mouth as wide as that there throne,” a frightened believer in the Ickabog’s murderous nature whispers to his attentive monarch.) As with her latest venture, the story’s ending is reassuringly cheery.

“The Christmas Pig,” sympathetically illustrated by the multi-award-winning Jim Field, performs the same trick on a more elaborate scale. It’s dreadful, of course, that 8-year-old Jack has lost not only his family (his beloved dad having walked out on him and his mum a couple of years earlier), but also his irreplaceable ally, a stuffed toy he calls Dur Pig, or DP, hurled out the car window by Holly, the angry daughter — from another broken home — of his mum’s new husband. Far more terrible adventures lie ahead, in the world of dreams, when Jack, accompanied by Holly’s despised gift of a replacement pig, sets out to rescue DP from the toy-crunching Loser, ruler of an underworld called the Land of the Lost.