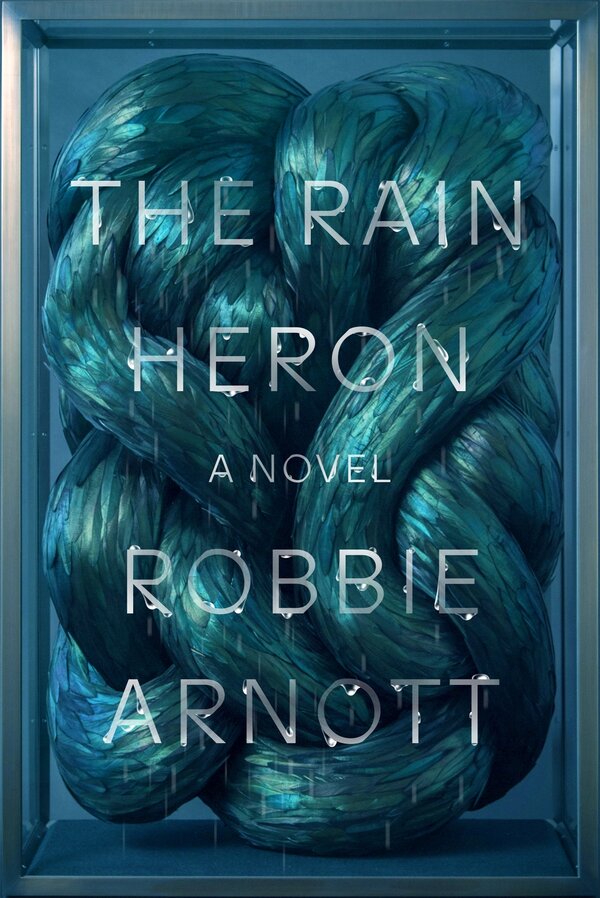 What exactly is a rain heron, the fantastical creature at the heart of the Australian writer Arnott’s daring, atmospheric novel? Is it just a “fairy tale” or is it real — and why is the military so intent on tracking it down? These are some of the questions propelling this dark eco-fable set in a no man’s land ravaged by marauding soldiers, floods and freezing winds.

It makes sense, then, that Ren, on the run from the army and her past, seeks refuge in a remote cave, foraging to survive. But Ren, it turns out, has actually seen the rain heron and will be forced by a hardened officer named Zoe Harker to lead her to it. And what an amazing sight the bird truly is: an iridescent, translucent being that can transform into water and mist. Even more incredible, it has the power to alter the weather, a coveted tool — or weapon — for whoever captures it.

Ultimately, Harker gets her prey, but at a cost. She is partially blinded by its talons and wounds Ren, who tries to stop her. The heron itself will wreak havoc on the landscape they cross to deliver it to the military. The novel moves at a quicksilver pace, shimmering with menace and electric visions of forests and lake-filled valleys. Harker’s own metamorphosis, as she later drifts remorsefully through “the quiet carnage of the world,” is as remarkable as the heron’s. “I felt suddenly transparent,” she says, on re-encountering Ren, “as if she could see through my skin and flesh, and into the air behind me.”

“American Delirium,” by the Argentine author González, takes place in a Middle American town in the not-so-distant future, also troubled by political turmoil and a natural world gone haywire. Homelessness and unemployment are rampant, and many are turning their backs on society, heading to the woods to join a Finnish mystic and his commune. There, under the influence of a powerful hallucinogenic plant called albaria, they embrace an “animal time where consciousness disappears.”

But these searchers and dropouts, who leave their children to become wards of the state, aren’t the only ones acting strange. The deer, too, have become rabid, violently attacking townspeople. Everyone, in one way or another, is affected by the turn of events: Berenice, a “left-behind,” who is searching for her disappeared mother; Vik, a refugee from the Caribbean island of Coloma, who discovers a cultist squatting in his closet; and Beryl, whose own experiments in the 1960s have left her slightly gun-crazy and out of whack (“one more passenger in the greatest shipwreck any era, any country, any generation has known”). Her solution: Organize a vigilante group of seniors to hunt down the wild deer.

It may all seem a lot to keep track of, but González manages to merge the stories of Berenice, Vik and Beryl — gradually revealed in alternating sections — into one dizzying vortex, combining colonial history, generational delusions and psychedelic drug trips. Fluidly translated by Cleary, the novel offers an eerily familiar vision of American madness and decay — from an Argentine writer, no less.

Several forms of delirium — desire, idealism, grief — infect the privileged family of “Antonio,” a novel by the Brazilian writer Bracher. Benjamim, a soon-to-be father, has come to São Paulo to learn more about his own father, Teodoro, who ended up homeless among “the immiserated, the favela dwellers, the landless people.”

Benjamim turns to three main witnesses for answers, and they don’t always agree. His grandmother, Isabel, proud matriarch of the Kremz family, has one version. “We’re not literature, my dear,” she warns him. “It’s much more complicated than a love story.” Raul, Teodoro’s closest friend from his youth, has his own take. And Haroldo, a former colleague of Benjamim’s grandfather Xavier, is still clouded by his feelings for Isabel and resentment of Raul.

What Benjamim discovers, however, is enough to mess with anyone’s head. Teodoro and Xavier, his father and grandfather, both fell madly in love — and had children — with the same woman, Elenir. Xavier married her when she was just a teenager in 1950, but had a mental breakdown when their infant child died.

Unaware of his father’s past, Teodoro encounters Elenir years later while roaming the sertão, or backlands, in the late 1970s. But, again, tragedy strikes, and Teodoro’s collapse is complete. “Sleeping with your father’s woman: Can anyone stand it without gouging his eyes out and being condemned to wander?” Raul asks. As in her novel “I Didn’t Talk” (also elaborately translated by Morris), Bracher brilliantly picks away at the web of secrets and lies plaguing a family and country.

IF YOU KEPT A RECORD OF SINS
By Andrea Bajani
Translated by Elizabeth Harris
200 pp. Archipelago. Paper, $18.

Bajani’s “If You Kept a Record of Sins,” gracefully translated from the Italian by Harris, is a more muted tale of a son’s pain and loss, and the viewpoint is wholly his own. Lorenzo arrives in Bucharest for his mother’s funeral, flooded with feelings of abandonment that go way back. “You started leaving when I was young,” he tells her, beginning an inner conversation that courses through this slim, astonishing book.

As a child in Italy, Lorenzo grew accustomed to being left at home with his stepfather, as his mother, Lula, traveled the world hawking a newfangled weight-loss machine. He recalls the emptiness of their house when she was gone, and the exotic souvenirs that piled up when she returned: “They were from every country, every corner on earth, my room, trip after trip, becoming the world map of your absence.” Eventually, though, the gifts stopped coming. Lula, along with her business partner, Anselmi, permanently settled in Romania, a country crawling in the 1990s with “entrepreneurs, pioneers, hunters.”

Over a week, Lorenzo wanders the streets of Bucharest, killing time at the former palace of the dictator Nicolae Ceausescu, smoking cigarettes and drinking beer with Anselmi and other workers. At night, he watches the city light up from his mother’s apartment, unable to sleep. Who was she, he thinks, this woman he hardly knew? And what was her life like here after leaving him behind? Bajani etches an impressionistic portrait of a young man — like the foreign city outside his window — trapped in a shadow land between past and present.