Home » Books » Joan Didion Revisits the Past Once More

Joan Didion Revisits the Past Once More LET ME TELL YOU WHAT I MEAN
By Joan Didion

There is no mistaking, at the mention of plastic hydrangeas, that one is reading Joan Didion. Much like the words “MIRACLES STILL HAPPEN” written in pink icing on a Gamblers Anonymous anniversary cake, or the paper napkins at the Hearst Castle, fake flowers are one of many visual, allegorical asterisks that comprise the risible terms of this veteran writer’s American mise-en-scène.

In five decades’ worth of essays, reportage and criticism, Didion has documented the charade implicit in how things are, in a first-person, observational style that is not sacrosanct but common-sensical. Seeing as a way of extrapolating hypocrisy, disingenuousness and doubt, she’ll notice the hydrangeas are plastic and mention it once, in passing, sorting the scene. Her gaze, like a sentry on the page, permanently trained on what is being disguised.

The 12 previously published essays collected (mostly) for the first time in “Let Me Tell You What I Mean” were written between the late 1960s and the year 2000. They are gathered coolly, unevenly, with an easygoing generalness, like a Didion digest. Or, since nearly every piece in the collection contains some mention of flowers, like a Didion bouquet. After all, she is her own kind of arranger — of words, of story — whose intuition for narrative arc is matched by her intuition for syntax.

Revisiting her work now provides a familiar joy, as well as a reminder of her prescience. Didion has a facility with bad omens, particularly when it comes to Ronald Reagan’s tenure as the governor of California. Telling Didion that “having a pretty place to work is important to a man,” Nancy Reagan fills an apothecary jar with hard candies for his desk, carpets the floors of the State Capitol “in a pleasing shade of green,” Didion writes. (What green carpet, Didion’s deadpan delivery invites us to ask, has ever been “pleasing”?) Didion’s understated tone registers the nuances obscured by the quotidian: the stiff neutrality between mother and son (“The Skipper’s arrival is, I have been told, the pivotal point of Nancy Reagan’s day”), Nancy’s preference for little choreographies.

The essays in “Let Me Tell You What I Mean” are at once funny and touching, roving and no-nonsense. They are about humiliation and about notions of rightness. About mythmaking, fiction writing, her “failed” intellectualism and the syntactic insides of Hemingway’s craft. She first published the essay on Martha Stewart — on her core values and her inventory of scalloped tulle — in The New Yorker in 2000, four years before Stewart was sentenced to prison for insider trading. 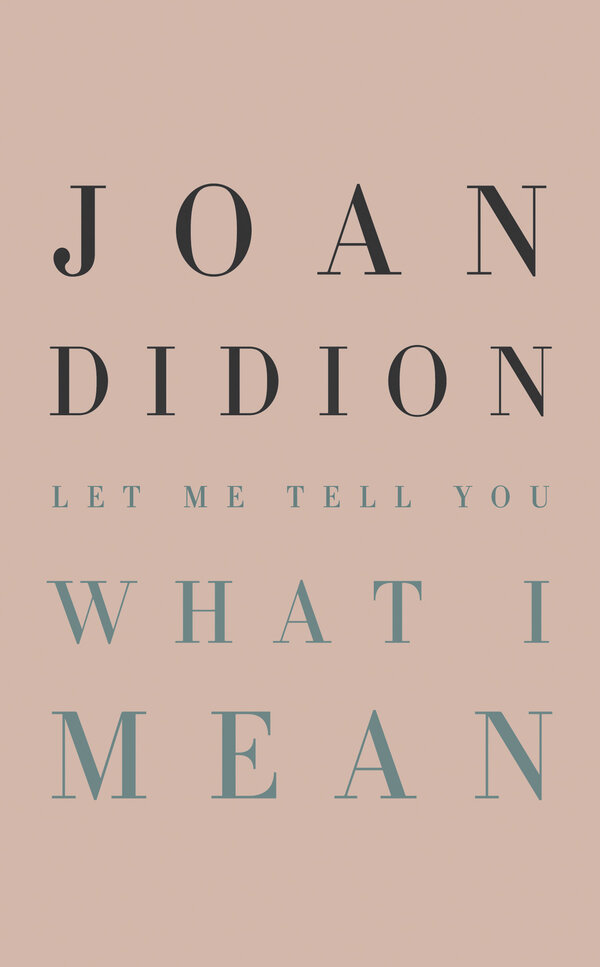 To Didion’s longtime readers, the title may feel peculiar; her essays so rarely waste room on the page by pausing to instruct, or explain so crudely. As she puts it in her 1976 essay “Why I Write”: “I write entirely to find out what I’m thinking, what I’m looking at, what I see and what it means. … What is going on in these pictures in my mind?” Her “I’s” are less authoritative than exploratory, arranged for rhythm and for that vaguely keyed-up sensation she calls “the shimmer.” Hers is the “I” of an onlooker, migratory, ruled by the specific. She writes from the selvage edge, prose that does not unravel: “My attention was always on the periphery, on what I could see and taste and touch.” Her memory of studying “Paradise Lost” on the commute between Sacramento and Berkeley, where she was an undergraduate, is rerouted by another, more sensory recollection: “I can no longer tell you whether Milton put the sun or the Earth at the center of his universe … a topic about which I wrote 10,000 words that summer, but I can still recall the exact rancidity of the butter in the City of San Francisco’s dining car.” The literary subject might have been “the central question of at least one century,” but for Didion, it’s the sour taste that takes form years later. The sour train butter is more epic.

The book’s six opening pieces are taken from the “Points West” column she shared with her husband, John Gregory Dunne, in The Saturday Evening Post in the ’60s. All six were written in 1968, the same year she published her first nonfiction collection, “Slouching Towards Bethlehem”; the same year the photographer Julian Wasser captured the black-and-white portrait of Didion smoking in front of her Corvette Stingray in Hollywood. In a 2014 interview with Vogue — where Didion worked for several years in the ’50s and ’60s — she noted that the Stingray was Daytona yellow. “A yellow so bright,” she said, “you could never mistake it for anything other than Daytona yellow.” The yellow is as certain to her as is her early work to us. You could never mistake it for anything other than Didion.

In “A Trip to Xanadu,” Didion recounts a visit to the fabled San Simeon castle: “the phantasmagoric barony that William Randolph Hearst made for himself on the sunburned hills above the San Luis Obispo County coast.” She’d looked up at it from the highway countless times as child. When she finally saw it up close, as an adult, with her niece from Connecticut, she writes, “it was what I expected, and it was not.” From the outset Didion’s nonfiction has shown no obligation to the whopping epiphanic. Realizations occur, but she relates them without splendor, as if she’s extracting a tincture. Hearst’s mansion is “a sand castle, an implausibility,” she writes. “A pleasure dome decreed by a man who insisted, out of the one dark fear we all know about, that all the surfaces be gay and brilliant and playful.” For Didion, reality arrives with its own controlled disenchantments; her method of itemizing, in this case, the castle’s great pools and carillon bells, the zebras and the bougainvillea, is a matter of liaising with the past.

As Hilton Als notes in his elegant and panoramic foreword, Didion is fifth-generation Californian; the language she speaks is, like every writer’s, regional. For her this means having a taste for the extreme and whatever strangeness escorts sunshine; the view from a highway and the perspective gained from passing — not through, but alongside. In that same piece about San Simeon, Didion, whose writing is always on some level a deliberation on writing itself, ends on a theory that so many writers wrestle with: “Make a place available to the eyes, and in certain ways it is no longer available to the imagination.”

Didion turned 86 in December. Many of these dispatches, organized chronologically, were written when she was in her 30s and 40s. A half-century after her last “Points West” column, Didion’s questions remain acute as ever. Reading newly arranged Didion, which is actually old Didion, feels like reaching that dip in a swimming pool where the shallow end suddenly becomes the deep end. The bottom drops out, and you are forced to kick a little, to tread. This is why we return to her work again and again.

But Didion cares less for timelessness than for the evanescence of language, mistrusting pink icing or anything else that might launder truth. Undergirding the entire collection is a regard for ephemerality. Of glory, and of the era when fashion photographers called their spaces “the studio.” Of fairy tales and failed attempts at quietude, of a child’s memory soup of imagination. Contrary to what this book’s title might suggest, Didion deals not in the definite. Reading her letter of rejection from Stanford, Didion recalls “trying to interpret the words in some less final way.” Perhaps it’s the same impulse that’s behind the ellipses at the end of so many of her essays; her writing rarely winds up, but wanes with unnerving preoccupation. The Didion exit — on full display in this collection — reveals the writer’s discreet contempt for those who cheer on the encore. She rarely troubles herself with the loudest person in the room, listening rather for stories on a Greyhound bus or a flight to Honolulu, or in temporary setups with folding chairs and people clinging to their last hope. Didion’s pen is like a periscope onto the creative mind — and, as this collection demonstrates, it always has been. These essays offer a direct line to what’s in the offing.