Songwriter Josh Pyke's most recent tattoo is of a young boy clad in a fox onesie. The ink is to commemorate his first-ever children's book, Lights Out, Leonard, with the image based on Chris Nixon's charming illustrations of the titular character.

"I've got tattoos from tours that I've done and bands that I've played in and it just felt right to get one for the first book I'd done," says Pyke. 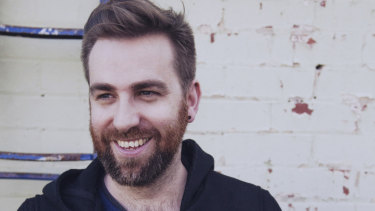 Josh Pyke has swapped writing music for writing for children.

The multiple ARIA Award winner and father of two worked on the picture book during a hiatus from touring. Lights Out, Leonard follows a boy who is afraid of the monsters that lurk in the dark and fights his parents' attempts to dim the lights for bedtime until a special book appears.

"People have the misconception that it's easy to write a kids' book, but you have to be really efficient with your words," says Pyke. "Every word has to have meaning."

Pyke, an inner west local, appears at Dulwich Hill Village Fair on Sunday at 11.30am at the storytelling tent to read the tale. The day's other events also include talks from artisan food producers, live performances from local groups and markets stalls to browse.

His years on stages around Australia and the globe playing to sometimes inebriated punters have sharpened Pyke's skills to face an audience of little ones hopped up on sugary treats.

"It has actually left me really well prepared," he says. "I've found when I'm reading the book to kids, they really respond to an adult being a bit of a goose. When I read to my kids they love when you put on your silly voices. That's very similar to when I'm playing shows, you have to be a showman."