Ape misbehavin’! He’s the celebrity who had sex in front of royalty – and as a charming new book reveals, Julius the chimp was so at home living with humans he watched TV with the children and even slept in a bed

There used to be a rather naff parlour game about naming five famous Norwegians. Ibsen, Grieg of course, and for older popsters maybe Morten Harket of A-ha.

It turns out that, in his time, none of them could hold a candle to Julius the Chimpanzee. Now 40, the old boy, like many celebrities, has calmed down a bit and is living a contented life as the alpha male, surrounded by admiring women and children, in a protected chimp community in the zoo where he was born on Boxing Day in 1979.

He can perhaps look back — for chimpanzees have tremendous memories — to when he was a colossal national treasure: there were Julius sheets, pillow cases, T-shirts and mugs, best-selling books were written about him, he was a star of children’s TV, he sold his own paintings, he was the subject of hit songs and Julius posters plastered the bedroom walls of countless Norwegian children. 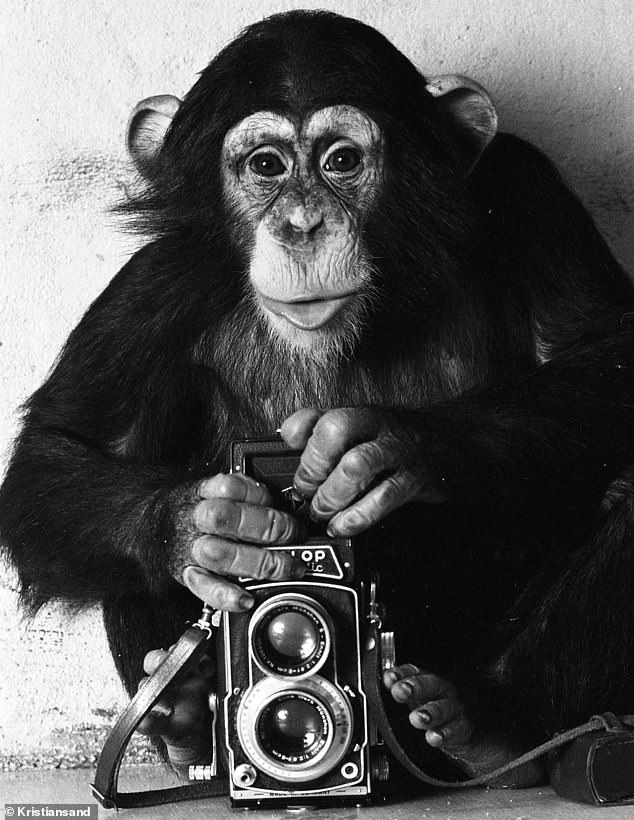 A biography has been written about Julius the Chimp, one of the first to trace the life of an ape. Here he is seen clutching a camera

Thousands of people came to see him at Kristiansand zoo in southern Norway. He even met A-ha’s Harket, a noted environmental activist, when the singer and his family came to open a new extension to the zoo in what must have been an extraordinary celebrity mash-up.

Now the story of this remarkable, delightful but often troubled icon has been told — in the first biography of an ape I can think of — in this short but thought-provoking book written by an award-winning Norwegian journalist.

We share 98.6 per cent of our genetic material with chimps: but the other 1.4 per cent must pack a colossal punch because chimps, no matter how cute and lovable, are animals, and we’re not. Well, usually not anyway.

Chimps are hugely strong and highly intelligent. They grow up fast and by the age of five they are stronger than most human adults. They can cheat, and feel remorse.

They are acutely self-aware, too, and are one of the few animals who can recognise themselves in a mirror. They are naturally aggressive and can be destructive and resentful of discipline (sounds like your average teenager). 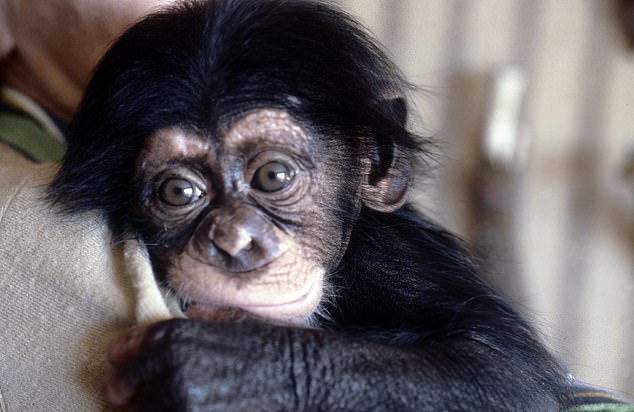 The primate was taken in by a human family when he was small, who were keepers at his zoo, Kristiansand in southern Norway. His mother had rejected him at just a few weeks old and another chimp has bitten off his middle finger

Chimps have a riotous sex life with mating rituals that make an Ayia Napa stag-do look like Holy Communion. The act itself is fairly brisk — a tidy seven seconds if you’re interested.

On the zoo’s 25th anniversary in 1989, Julius’s tenth birthday, Crown Prince Harald came over for a visit, not least to see the chimp. The youngster was given a large helping of bananas and, it was thought, would be up for performing a few tricks for the royal guest.

But Julius had other plans — he was keen to cement relations with his latest girlfriend. So after just a few seconds, Prince Harald wandered discreetly off to look for other distractions.

Chimps need constant stimulation, but they also love fun and fighting. They can and will bite. Which is why Julius first got noticed. He was only a few weeks old when he was rejected by his mother, Sanne, who was young (just eight) and a complicated lady to boot. Then one of the chimps bit off his finger.

He was found howling with pain (so human) in a pool of blood and the zoo director Edvard Moseid and vet Billy Glad took him into their homes. There he learnt to play with the human kids, wore a nappy and clothes and was comforted in bed by Moseid’s wife when he had ‘nightmares’. 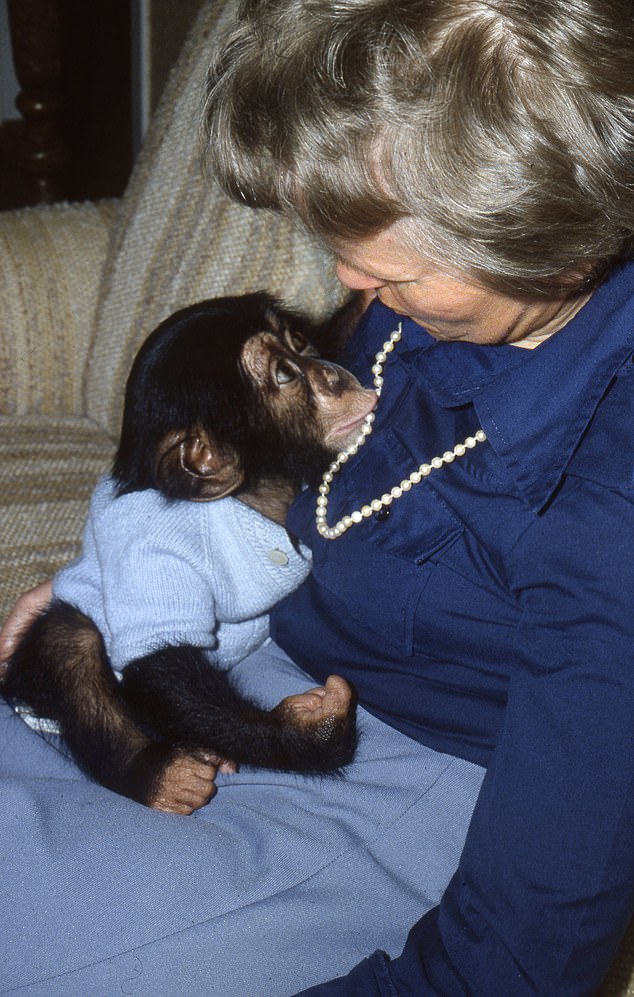 The poor little chimp was raised in a human family and used to sleep in the family bed, being comforted when he had ‘nightmares’, and wore a nappy and clothes

He would sit on the sofa watching TV and playing with the Moseid children, an arm around each of them, planting little kisses on their cheeks. No wonder they shared their sweets with him.

He liked to play ‘cars’, pushing his drinking bowl around on the floor, and inviting the kids to join him. 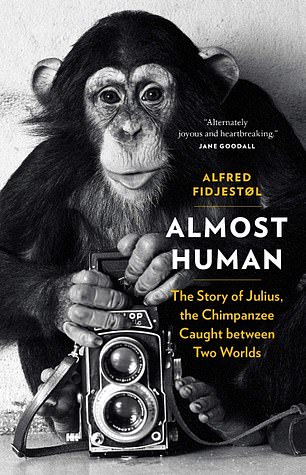 The book is £18.99, and has been published by Greystone books

He understood the rules of play, and was alert to any of the children trying to gain a march on him in their games of tag.

Zoos are commercial operations and the Kristiansand hierarchy knew what a prize asset they had.

A slew of programmes on Norwegian children’s TV followed, propelling Julius to the upper reaches of celebrity.

But modern zoos are also important centres for animal welfare and research, with an acute awareness of environ- mental responsibility.

As he got bigger and more boisterous, Julius’s keepers knew that sooner or later they would have to reintegrate him with the other chimps at the zoo.

But it was not such an easy task — chimps can be resentful of outsiders and quick to take offence. It was a long, drawn-out process and Julius unsurprisingly became confused: a chimp by day and a human by night.

As the readjustment to chimp life continued, he was left overnight in a special cage so the fellow chimps could get used to him, too, knowing he was there but unable to knock him about.

Heartbreakingly, when the keepers left him overnight they could hear him crying. He felt abandoned. But ever-resourceful, long-limbed and exceptionally smart, Julius’s determination to escape — usually clambering up through the roof beams — would bring a smile of approval to a Colditz veteran. He was thankfully always recaptured. Chimps do love a party and Julius is no exception. There is a splendid account of one of his birthdays: sugar and attention are two of Julius’s favourite things. 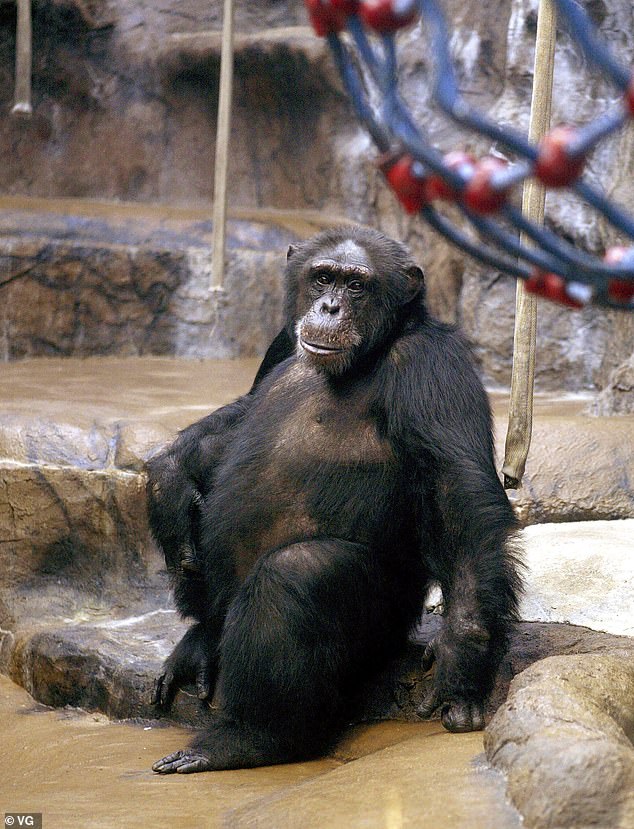 When he got larger and more boisterous, Julius had to be re-integrated into chimp life. When placed in the cage with other chimps at night, left inside his own cage for his protection, Julius could be heard weeping

He can show off his party tricks, too: while the other chimps have to bite the top off their bottles of fizzy pop to get a drink, Julius elegantly screws off the cap with his long fingers.

This fascinating little book touches on central issues of our time, too, but never hectors us.

In Julius’s lifetime, half the world’s animal populations have been lost.

The number of wild chimpanzees is in freefall: from one million when he was born, there may now be no more than 200,000.

Do zoos cause abnormal behaviour in animals? Almost certainly, but captive animals may be the only hope for some species in the future, as even the legendary chimp expert Jane Goodall concedes. In the meantime, Julius, enjoy your retirement.