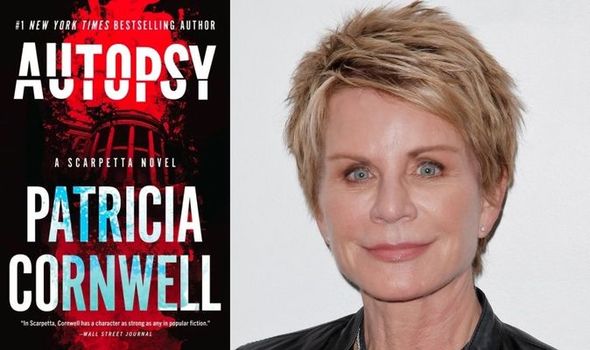 In fact, as the superstar author explains: “During the course of my research I went to the US Centers for Disease Control and they thought it was funny. Nobody was going to weaponise smallpox, in fact they were preparing to eradicate it.”

Fast forward three decades and it seems entirely possible the devastating global Covid-19 pandemic might have originated from a Chinese laboratory. While Cornwell, 65, professes no inside knowledge, she does ask: “What makes you think somebody, somewhere hasn’t tried to weaponise a virus? I’m not saying that happened but as Scarpetta would say, ‘Let the science tell you what happened’. I think we live in a world now where it’s foolish to underestimate the capabilities of what can go wrong.”

As one of the world’s best-selling writers, fabulously wealthy and extremely wellconnected in the worlds of security, forensics, crime and, now also, space exploration, I wouldn’t bet against her stumbling upon the truth. After all, since Postmortem, her groundbreaking first book featuring medical examiner Dr Kay Scarpetta in 1990, Cornwell has been at the forefront of explaining and popularising crime scene investigations and forensic science.

‘I really had just run of road. I think I wanted write the anymore I quit’

Her plots have often involved cutting edge technologies and a large degree of future prescience, revealing advances before they become mainstream. So it was a shock when, five years ago, she announced her 24th Scarpetta book, Chaos, would be the last.

“I really had just run out of road. I didn’t think I wanted to do it anymore and I quit,” admits the author, currently living in Cape Cod with her Harvard psychiatrist wife, Staci Gruber.

But after a Scarpetta sabbatical, in which she wrote two novels featuring Captain Calli Chase, of which more later, happily she regained her mojo.

Autopsy sees Scarpetta returning to Virginia, scene of many earlier adventures, as chief medical examiner. Charged with sorting the mess left behind by an ambitious but incompetent predecessor, and having to deal with a ghastly new British secretary, she quickly realises a serial killer may be at work.

Scarpetta is also serving on the new president’s Doomsday Commission, a high-powered White House emergency committee, resulting in a thrilling murder investigation aboard a top-secret orbiting lab experimenting in the 3D printing of human organs.

The autopsy is remotely overseen from earth by Scarpetta and carried out by two astronauts, almost certainly a first for a mainstream crime writer, I suggest?

“I believe that’s true and what I show is accurate, down to the ammunition and weapon used, how the bodies would be dealt with and how a crime scene looks in zero gravity,” she explains. “I worked with Nasa people, including ISS astronaut Jack Fischer, for my research, including what fluids do in space. It’s weird because, if you’re bleeding, the fluid just travels along your skin.”

If it feels like an exciting new start for Kay Scarpetta, that was Cornwell’s intention. “I wanted to bring all the characters back together, put them back where they started in a meaningful way, trying to recapture the DNA of the series,” she says.

“Over the years, I’ve heard so many people saying, ‘I want to read your new book but I haven’t read the last ten’. So I wrote this as if I’d never written any before – no one needs to have read any of my previous books to enjoy this one.

“I wanted to show people something new and different while keeping it rooted in things readers loved: the serial killer in the neighbourhood, what Scarpetta is cooking, what’s going on in the morgue.”

Why has it taken so long, I wonder?

“There’s never been a good script, including the ones I’ve written,” she laughs.

“We just haven’t had a story that works. Then because nothing got made early on, shows like Crime Scene Investigation started and there wasn’t the same marketplace.”

While the book was a silver lining of lockdown, giving her the time to write, she describes its title as a “gift from the universe”. “I came up with all these tiles and almost everything has been used, particularly when it comes to forensic pathology,” she explains. “Finally, for the heck of it, I Googled ‘autopsy’ and saw there had been nothing but a memoir by a medical examiner back in the 1970s.

“I thought, ‘If anyone should use that title, it should be me’. I like what it means: ‘See for yourself’ – that’s the key to Scarpetta.”

One of the most interesting sub-plots is Scarpetta’s niece Lucy’s attempt to come to terms with the loss of her partner and their son to Covid by interacting with an advanced avatar of the dead woman.

“There’s gonna come a day when you’ll have the ability for your Siri, Alexa or onscreen artificial friend to be somebody you used to or still know, someone you never met, or someone who’s been dead for 100 years,” explains Cornwell.

“Artificial intelligence (AI) is already happening at the speed of light and we’re going to see programming errors. If you have an autonomous car whose algorithm says it won’t stop if a plastic bag blows across the road, what happens if a plastic bag is being carried by someone? Now you have someone hit by a car, all because of a missing parameter.

“But we can’t live in this world without AI. The human capacity to multitask won’t be able to keep up.”

When I wonder if that concerns her, she pauses: “What concerns me is if our ability to create stuff outruns our humanity.”

Does that include social media?

“A couple of years ago Staci and I were in our kitchen making pizza. We were listening to [Canadian singer] Anne Murray and, for the heck of it, I tweeted: ‘In the kitchen listening to Anne Murray right now’, and low and behold Anne answered me right back and asked, ‘Where’s my autographed book?’

“You could’ve knocked me over with a feather. I ended up having lunch with her not long after that.There’s much about social media that’s really good but things that are abused and dangerous probably weren’t anticipated.

“Technology outran our humanity and ability to protect ourselves from misinformation and the dangerous things that can be done with it.”

The author accepts we’re living in strange times. For years, her most famous character has, tongue-in-cheek, put her youthful looks down to lifelong exposure to formaldehyde in the morgue. Cornwell herself used to joke about taking an intravenous drip of the chemical every morning.

“I don’t joke about that any more because there’s someone out there who might actually think it’s true, like the crazy things people were taking to fight Covid,” she admits.

“There are some things that need to be censored. If you know your audience might be millions of people, including those that might take you literally, maybe you don’t make the same jokes any more. Then again, there’s a difference between that and people who want to take offence at everything.

“There are things in my earlier books I would never put in today. Stuff that was meant to be satirical or whatever, that now if I could go back I’d probably prune.

“But there’s other stuff when it’s going too far, like when you’re told you can’t say ‘amen’ after a prayer because that’s a gender thing, when in fact it goes back meaning ‘so be it’. We need to be trying to find ways for us all to get better together. “There’s nobody that’s not flawed; no artist, no sculptor, no politician, no storyteller, none of us. Yes, we should all try to do better but we still need the freedom and accuracy of expression in a way that helps make sense of our planet. Let’s hope we come to find a middle ground. That’s the safer place to be.”

America remains deeply fractured by the so-called culture war between the woke and the traditional, stoked in part by Donald Trump.

“The mood of the nation is very divided. We’re in a different kind of civil war. People are judged on whether they wear a mask, whether they’re vaccinated or not,” says Cornwell.

“This is not the flu, there can be lifelong repercussions and we should have eradicated it much more quickly had people not politicised it in this country.”

Her new novel is back with a traditional publisher after a spell with digital giant Amazon, which put out her last two books, the Captain Chase novels Quantum and Spin.

“If you’re published by Amazon all the regular bookstores boycott your books. You won’t be reviewed, you don’t qualify for bestseller lists. They did a great job but it’s the war between entities.”

The pandemic, she says, caused a “huge shift in attitude”.

“Without it we don’t know who we are or what’s expected of us, we’re lost without a map. I hope I can be a voice of encouragement.”

So what else did she do during the lockdown besides writing? “I did take up one rather suspicious new hobby,” she smiles.

“Staci and I have collected Dr Seuss art over the years. But despite proper museum framing, several were so terribly faded they were beyond the abilities of the best art conservation available.

“I was told there was nothing that could be done.Which was heartbreaking.”

So Cornwell came up with a novel idea.

“I used to draw cartoons and I have magic markers and pencils. I said, ‘Dr Seuss, if I could channel you now, are you okay with me fixing your cartoons? I know it’s sacrilege’. And I sort of felt, he said, ‘Hey, I’d do it if I were you’. So I recoloured them. I now call them my ‘Doctored Seusses’.And even if the value isn’t what it once was because of my efforts, those I fixed are vibrant and happy again. Brightly hung with others in a place of honour, they make people smile, exactly as Dr Suess intended.”