Home » Books » Las Vegas, ‘the Most Honest City in America’

Las Vegas, ‘the Most Honest City in America’ “Las Vegas is a city of stories,” Dario Diofebi asserts more than once in his debut novel, “Paradise, Nevada.” Let’s leave aside for the moment the fact that any city, whether Rome or Seattle, Paris or Paducah, is a city of stories. Las Vegas is a city of the kinds of stories that appeal to ambitious writers keen to advance a grand statement: tales of working-class people and moneyed tourists, professional poker players, Mormons, criminals and drifters, all of whom rub shoulders at the casinos on the Strip. Las Vegas is so gauche, this line of thinking goes, so unabashed about its own vulgarity, that it is a perfect metonym for that original embarrassment, America. The same might be said of this gaseous, bloated 500-page exemplar of narrative sprawl.

Paradise, Nev., is a real place — the unincorporated, census-designated town where the Las Vegas Strip is actually located — and the title’s obvious joke is that this unfortunate outpost in the desert (“the ugliest city in America,” as a character who has come to shop at its outlet malls puts it) is anything but. Here, an eccentric, reclusive billionaire named Al Wiles has built the Positano, a facsimile of Italy’s Amalfi Coast that is meant to resemble the real lasagna in every faux detail: “the cliffs, the sea, down to the … lemon trees!”

The resort, where much of the drama takes place, exerts its gaudy, philistine pull on the four main characters. Tom, an Italian immigrant and “hopeless beta” who overstays his visa to play professional poker. Ray, an online poker whiz turned live player who exists “in pursuit of a perfect machinelike neutrality toward outcomes,” and whose tedious sections read as if they were generated by A.I. Mary Ann, a depressed, down-on-her-luck (of course) cocktail waitress who wants to “metaphorically vomit herself out of her body” and finds purpose in joining a shadow union working to sabotage the casino. And Lindsay, a 20-something Mormon journalist who has written an article about layoffs at one of Wiles’s secondary resorts. The omniscient third-person narrator weaves in and out of their thoughts, along with those of a chorus of minor characters — so many that the book feels fractured and lacks momentum. 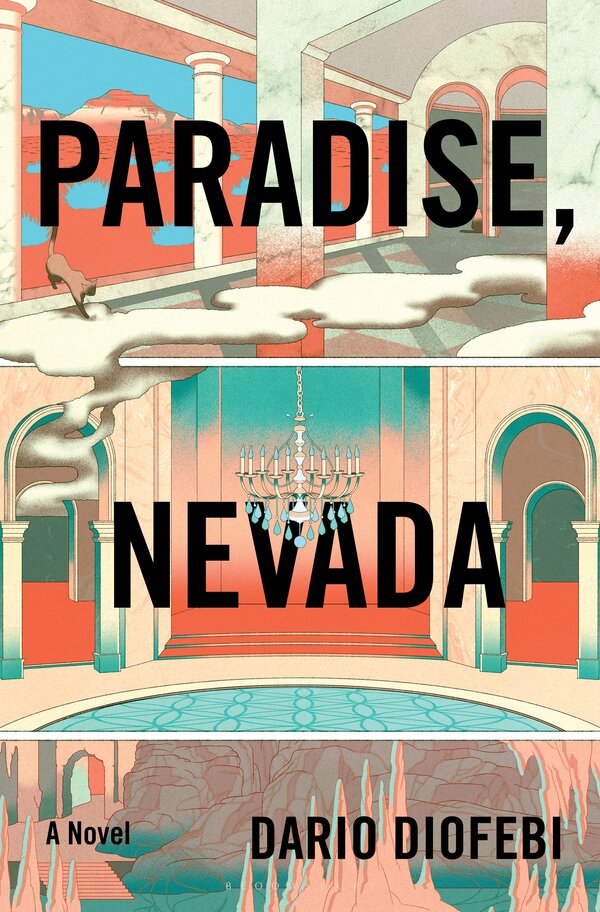 The ersatz elements of the Positano raise the question of the book’s own imitative impulses. It somehow unspools like a heist film that is also emulating David Foster Wallace poorly. Many of the sentences are so long that I don’t have room to quote one here, but watching them pinball around is disorienting; you have no idea where they’re headed next. Diofebi is similarly unrestrained when it comes to structure, tossing in email exchanges, footnotes, charts and vlog scripts, most of which feel superfluous and obscure.

Las Vegas “is the most honest city in America,” Walter, a businessman who frequents the Positano, says. “See, in the rest of the world, the rich hide away from the poor.” It’s commendable that Diofebi addresses class, that great taboo subject, but he seems to have either contempt for his working-class characters or precious little experience with their real-life analogues. Karen, an aging waitress and Mary Ann’s aunt, is said to have built her life around the “lesser American dream.” (And what is the greater American dream? Writing?) She wears “an oversize Las Vegas souvenir T-shirt” that reads “This Town Wasn’t Built on Winners,” which is also the subtitle of the book.

“There isn’t a single Italian who doesn’t hold a strong idea of what America is,” Diofebi writes, in a section about Tom, who is arguably a stand-in for the novel’s Italian author. This is certainly not the first take on America through European eyes, but there are the works of de Tocqueville and Baudrillard, where foreignness confers insight, and then there’s “Perfect Strangers,” in which the cultural comparisons are ham-handed, and the gags are cheap. Diofebi trots out all the familiar American topics — fraternities, road trips, Greyhound buses, casino buffets. “A land where shrimp cascaded by the tableful, just there for the taking,” Tom marvels.

In the end, all the characters, whose story lines obliquely brush against one another throughout the book, converge on the Positano for a dramatic, cinematic set piece that seems written with a Hollywood adaptation in mind. Rather than illuminating the cheesiness of Las Vegas, Diofebi succumbs to it.