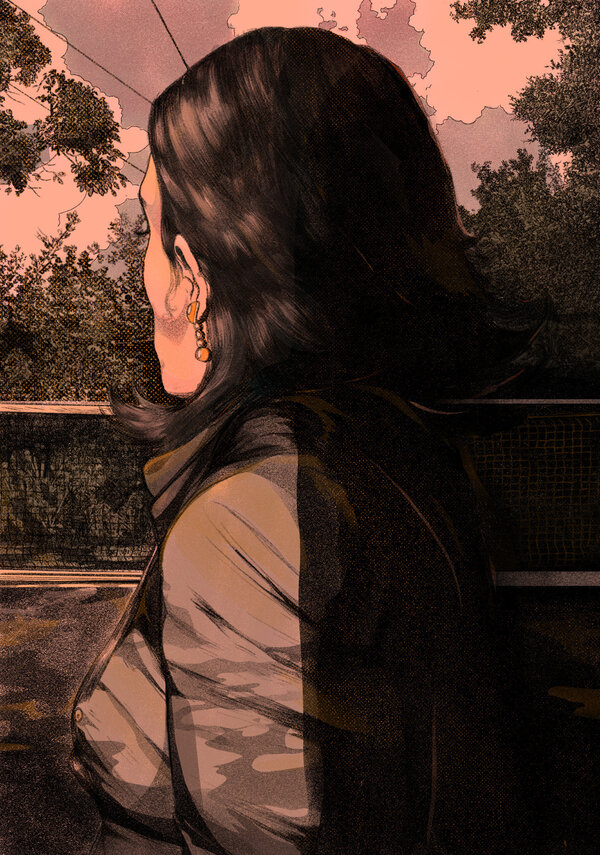 I couldn’t quite square the title of Liane Moriarty’s new novel, “Apples Never Fall,” with the family story it unfurls. When we meet the Delaneys — petite, spunky Joy and her hulking bear of a husband, Stan, both former Australian tennis stars — they’ve logged nearly 50 years of a passionate yet complex marriage. Their union seems perfect both on and off the court — that is, until Joy goes missing a few months before her 70th birthday.

For decades, the Delaneys dominated mixed doubles and celebrated their wins with rowdy displays of affection that raised eyebrows in the clubhouse. But after selling their tennis academy they’ve had too much energy and too little purpose. While Stan simmers in front of the television, Joy putters about, baffled by her four towering, worrisome children, whose failure to produce a single offspring enrages her. The kids have disappointed Stan too. Despite their athletic prowess none of them made it to center court at Wimbledon — a tall order, if you ask me. The senior Delaneys may have been inspired and crafty on court, but at home they give in to crude laments that their apples have fallen so far afield.

Despite their occasional mind-blowing sex — Moriarty is wonderfully generous with septuagenarian passion — there’s something rotten at the core of this marriage, something having to do with Stan’s former protégé Harry Haddad — a Grand Slam champion on the comeback trail who is about to release a memoir. Harry, a rival of the younger Delaneys both on the court and for their father’s affection, defected from their parents’ academy at the age of 17 to train at Tennis Australia, breaking Stan’s heart. No one, it seems, likes Harry.

As in her best-selling “Big Little Lies,” Moriarty toggles back and forth between present and past, between the search for Joy and the period before her disappearance when a mysterious young woman named Savannah turned up on the Delaneys’ doorstep. (She was on the run from an abusive boyfriend, or so she claimed.) Thrilled by her obsessive attention to them and oblivious to her game plan, the couple moved Savannah into their house. Why their kids weren’t equally excited by the girl’s presence, Stan and Joy couldn’t quite fathom — although as their fellow Aussies might say, it’s bleeding obvious.

As furious as the Delaney children were about the family interloper, they remain oddly blasé about their mother’s disappearance. “Our mother is possibly missing,” one of them tells an eavesdropping waitress. “We have temporarily mislaid our mother.” Even as the clues pile up, Joy’s vanishing seems more curious than urgent — a signal that if you’re expecting the Night Stalker, you won’t find him in this Sydney suburb. And while there is indeed an investigation into Joy’s disappearance, it feels more like an afterthought than a pressing matter, perhaps just an excuse for introducing a little ethnic diversity in the form of two detectives. (Moriarty often gives issues of race a sidelong glance while parsing the class distinctions among whites with razor-sharp precision.)

Where she excels is in the way all of her characters spring from the page so fully formed that I would feel comfortable selecting their clothes, ordering their meals and guessing their attitudes toward the newest releases on Netflix. The Delaney kids might seem to be stock figures — Amy, the troubled artsy one; Troy, the philandering highflier; Brooke, the driven businesswoman unlucky in love; and Logan, the sloppy bro with a heart of gold — but Moriarty layers them with experiences, mistakes and struggles that give them dimension.

While “Apples Never Fall” may follow the same playbook as Moriarty’s previous novels, it lacks the nasty delights of “Nine Perfect Strangers” and the simmering class and sexual tension of “Big Little Lies.” Since I am a sucker for a juicy sports novel, I’d hoped the pressure cooker of competitive tennis would heat things up, but Moriarty keeps the game offstage. “Apples Never Fall” is essentially two novels rolled into one — a wifty tale of domestic suspense, and a satisfying, layered family drama where the tension comes from the treachery of memory, the specter of generational violence and the effects of decades’ worth of unspoken resentments that have curdled over time. The real standout here is Joy. Just as she did with the sharp yet gullible Frances Welty in “Nine Perfect Strangers” (as superb a depiction of a novelist as you will find in contemporary fiction), Moriarty once again shows her mastery with the inner working of women of a certain age — their acuity, experience and ugly thoughts.

Initially, I was inclined to underestimate Joy. How disappointing that this once fierce tennis star has been reduced to a passive base-liner in her own home, patty-caking away her husband’s stubborn sullenness, deflecting all conflict and losing confidence in her own skills, worried that “her frontal lobe was atrophying.” But Moriarty proves to be subtle, sly and one step ahead of skeptics: Joy’s passivity is the story’s latent engine, masking her secrets and her secret resentments. Stan, too, is more than he seems. I was too quick to write him off as a typical brooding, moody former coach, looking back on the not-so-good old days with a disappointed eye. As the Delaney children begin to re-examine their parents’ marriage, we discover a depth to Stan’s silences and a wrenching rationale to his distance.

While Stan and Joy’s relationship is revealed with unerring precision, Moriarty stumbles with Savannah, the purported villainess. She’s a blurry psychopath, sometimes a cunning little vixen, sometimes a sad grifter, sometimes a damaged child. When the truth about her connection to the Delaneys comes to light, it seems both unbelievable and undercooked. Suffice to say, she has a small, irrelevant ax to grind.

The novel’s focus starts to meander in the last third. As Moriarty juggles two prime suspects, we lose sight of the family dynamic, which is the more compelling part of the story. Instead of a nail-biting fifth set, we are served up a handicap round robin played at the local club in which a whole bunch of cute clues and red herrings coalesce into a comical explanation of Joy’s fate. If it is the bad habit of many modern readers (I am one) to expect or even to crave violence, Moriarty is not here to fulfill that wish, nor should she be. But after nearly 400 pages of cliffhangers, I was hoping for a resolution with a little more bite. What Moriarty is after is something else altogether. She ends with revelations that love is hard, mistakes are necessary and betrayals large and small are unavoidable facts of family life. And indeed, apples do fall far from their trees, as they should.