Home » Books » Mick Herron and the grubby world of espionage

Mick Herron and the grubby world of espionage

George Smiley, James Bond or Jackson Lamb? An intellectual, restrained, repressed and refined; a man of action, licensed to kill and fornicate; a former "joe" in the field, dirty, overweight and not so much going to seed as already turned into mulch.

All spies, and when people think of espionage novels, the names John le Carre and Smiley, and Ian Fleming and Bond are invariably the first to spring to mind. Perhaps Alan Furst or Len Deighton or Charles McCarry then crop up. Or further back John Buchan or Erskine Childers and more recently Daniel Silva, Dov Alfon or Stella Rimington. 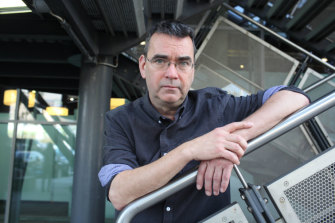 Mick Herron is more interested to write about failures in the world of espionage than secret agents.Credit:Alamy

Espionage fiction has a rich heritage and plenty of writers have dabbled – think of Graham Greene's Our Man in Havana and Joseph Conrad's The Secret Agent. Some such as le Carre and Fleming, Rimington, a former director general of MI5, and McCarry had hands-on experience in the secret world behind the seats of power. Others have simply made it all up.

Mick Herron falls into the latter category. But in his six Slough House novels he has created a distinctive world that has offered a further breath of life for a genre that many envisaged would struggle after its Cold War glory days and – is this sacrilege? – can be spoken of in the same breath as le Carre's Circus.

"It came as a huge surprise when people started comparing me to John le Carre," he said on the phone from his home in Oxford, "and I realised quickly that was simply because I was writing spy novels. Everyone who writes them will get compared to le Carre, Deighton or Greene. That's simply the critical language."

He wasn't in any way inhibited by the figure of le Carre looming across the terrain: "Writing is an intimidating thing in itself – just daring to do it – without having particular characters that one might fear."

He reckons le Carre's great trilogy – Tinker Tailor Soldier Spy, The Honourable Schoolboy and Smiley's People – are the benchmark for spy fiction, "but what I'm doing is miles different from that. I very much doubt that he would approve of what I'm doing."

What he is doing is writing about failure. Slow Horses, his first, introduced us to the agents who work at Slough House, the most distant extremity of the MI5 body where those who have jeopardised operations, drunk too much, compromised secrecy or generally made a complete balls up of their lives or the lives of others have been exiled.

There they come under the watchful but not tender eye of Jackson Lamb, corpulent, foul-mouthed, flatulent, unwashed and grubby, who, like his charges, has been banished from the head office to which they all yearn to return, Regent's Park. (Lamb may even remind you of the super-sized Ignatius J. Reilly from A Confederacy of Dunces only a bit shabbier and not quite as funny.) 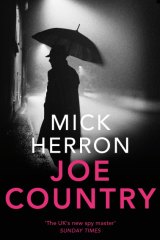 They are the denizens of a shabby three-storey terrace near London's Barbican masquerading as a firm of solicitors and squeezed uncomfortably between a newsagent's and a Chinese restaurant; a building that creaks and groans and is as much a character as River Cartwright, Catherine Standish, Louisa Guy and the others who work there. Only Lamb, despite his considerable paunch, can – when he chooses – get up the stairs without alerting any of them to his presence.

Since that first novel came out in 2010, there have been five more – Dead Lions, Real Tigers, Spook Street, London Rules and, this month, Joe Country.

Herron says he writes about failure because it is more interesting. "I am much more interested in this small world that I have created, this bunch of failures struggling with their own issues, than I am writing about what the world of spies is really like because I have never been in that world."

He originally wrote what he calls straightforward crime novels featuring his Oxford private detective, Zoe Boehm. He began Slow Horses – also the name for the agents at Slough House – in 2008, wanting to write about a group of people and also more political material. He thought spies would give him more scope.

"There were things going on in the world that made me want to address broader issues like the London bombings that happened a few years before. (He was in the underground on the way to work at the time, but not caught up in the horror.) That was a big trigger to make me realise that huge events were not necessarily something that you had to have specialist knowledge to be aware of or be involved in any more. You just had to be living in a city; that put you in the front line, in a way."

Although he deploys a large ensemble cast and is not averse to killing off characters – Joe Country begins with two slow horses dead, but the questions are who, why and how – Jackson Lamb comes to be a dominating presence.

"He was never intended to," Herron says. "But whenever he appears on the page he does tend to take over and that's an obvious consequence of trying to write a character who is turned up to the maximum all the time."

But he doesn't allow Lamb much interiority. "I never tell you what he's thinking or feeling, because he's one of those characters if you shed too much light on him it would spoil him." Others characters seem familiar, though. In Slow Horses he describes the recurring, former politician, Peter Judd, as "a loose cannon with a floppy haircut and a bicycle" and when Judd reappears in Joe Country he's "the one-time scourge of the liberal left, with a personal life not so much lock-up-your-daughters as scorch your earth and erect watchtowers".

"I think it's fair to say there are few politicians around of whom I am a big fan. None at all, I would think. My intention at the time of writing was to produce a number of composite figures who would sum up the political situation at the time. He is more obvious than most; everyone attaches his (Boris Johnson's) name to that character. I think there's clear blue water between the two, but … Peter Judd is my example of everything that's wrong with politics. I think there are a lot of politicians you can look at and see examples of that in them. Boris Johnson is one of them. I have no time for him at all."

When he started Slow Horses it was not intended as the start of a series. "My original plan was that the ending would be very different and it would pretty well have closed down any possibility of a sequel."

He started off writing poetry and still considers it the highest literary calling.

But there are advantages in a series.

"You always have a ghost novel waiting for you. You have the characters there and you have the overall situation and some idea of how you want their relationships to go forward. Finding a plot for them is quite easy when you've got all the information there because the plot is simply an excuse to get them to go into their dance routine."

"The difficult part is the notion that you get tired of working with the same people all the time and that's what I'm trying to avoid by having this revolving door policy."

Perhaps there was an inevitability that Herron would write. He grew up in Newcastle and his mother, a pre-school teacher, taught him to read before he went to school. That started him off on a path that took him to Oxford to study English.

"I can't see that I could have studied much else, or certainly not in a fulfilling way because reading and thinking about books and being part of that, having it in my life, is the only thing I was better than average at. Everything else fell by the wayside pretty quickly."

He started off writing poetry and still considers it the highest literary calling. But it stopped happening for him. "If I had been able to continue writing poetry, I would never have started writing novels. It's an enormous help with prose because word choice and rhythm are equally crucial to prose but less obviously so."

He was working as a sub-editor on legal journals when he shifted to fiction, but that proved good training, though. "Best lesson of all: how to delete material with no trace of remorse."

Perhaps it's not surprising, then, for a poet and a sub to creative triggers in language, individual words that jump out at him. "And I think, I want to write a sentence with that word in."

I ask him for an example and he says they tend to be coarse, presumably because Lamb gets to use them.

"One I remember clearly was realising that the word 'us' is contained in the words ‘clusterf—'. That's a moment when you punch the air and think ‘I can do something with that'. (He uses it in book five, London Rules.) The potential in the language for this kind of wordplay I find a never ending source of delight."

Joe Country is published by John Murray at $32.99.