Need Etiquette Tips for Cannabis? For Starters, Don’t Call It ‘Marijuana’ or ‘Weed.’

Humphrey Bogart had a way with life’s little vices. When he bought you a drink, the critic Kenneth Tynan recalled, he wouldn’t just pass it across — “he’d take me by the wrist and screw the glass into my hand as if it was a lamp socket.” Bogart’s manner with a cigarette was so vivid that his surname became an admonishing hippie-era verb: “Don’t bogart that joint.”

I’ve tried repeatedly, over the course of my life, to become a druggie. It’s never taken. But even I know what it means to bogart something: to hoard it, to refuse to share. It wasn’t until I read Lizzie Post’s helpful and inquisitive new book, “Higher Etiquette: A Guide to the World of Cannabis, From Dispensaries to Dinner Parties,” however, that I fully understood the term’s provenance.

“Bogarting is a term derived from the way Humphrey Bogart would just let a cigarette hang out of his mouth, not seeming to actually smoke it,” Post writes. “Bogarting a joint is when you are holding on to it or wasting it by letting it burn down without being hit.” In other words: Pass the dutchie, Bogie, on the left-hand side.

Post is the great-great-granddaughter of the American etiquette doyenne Emily Post. Born in 1982, Lizzie is the author or co-author of several previous books about manners, and co-president of the Emily Post Institute in Burlington, Vt. The first question she asks, in the preface to “Higher Etiquette,” is: “What would Emily Post think of this book?” She decides her ancestor would have nodded her assent, if not with a lopsided grin.

Emily Post didn’t drink or smoke, and she left behind no opinion about pot. But she fought against the prohibition of alcohol. As one of her biographers, Laura Claridge, wrote: “She was disgusted with the government’s interference with what she believed were citizens’ rights.” It’s a mistake, anyway, to assume that Emily Post was a goody two-shoes. Edmund Wilson admired the original edition of Emily Post’s “Etiquette” (1922), and later wrote about it: “One feels, in fact, something like sadism in the whole approach of Mrs. Post. She likes to humiliate.”

There’s no sadism in “Higher Etiquette.” This is a friendly book, the one to give to your cousin who is about to visit her first dispensary on a “weedcation” (one of the many portmanteaus that fill this book, like Hindu Kush inside a hollowed-out cigar), or your aunt who wants to learn about CBD oil, made from a chemical compound in cannabis, to palliate the burden of her arthritis pain.

A book titled “Cannabis for Dummies” already exists. A better title for this one might be, “Cannabis for Really Nice Dummies, Who Regularly Change the Bong Water and Rarely Let Their Coffee Table Remain Sticky.” A question this book poses on nearly every page is: How can something that makes your cheeks sore from smiling, that so reduces your zone of woe, be worth scorning?

Ninety-five percent of the contents in etiquette books would be superfluous if we tattooed the golden rule on the insides of our eyelids. Still, Post writes, “When changes occur in a culture (like the legalization of cannabis), new manners emerge, and others become traditions of the past or obsolete.” If we base our behavior on “consideration, respect and honesty,” she writes, “even when things go badly, others can understand our good intent.” 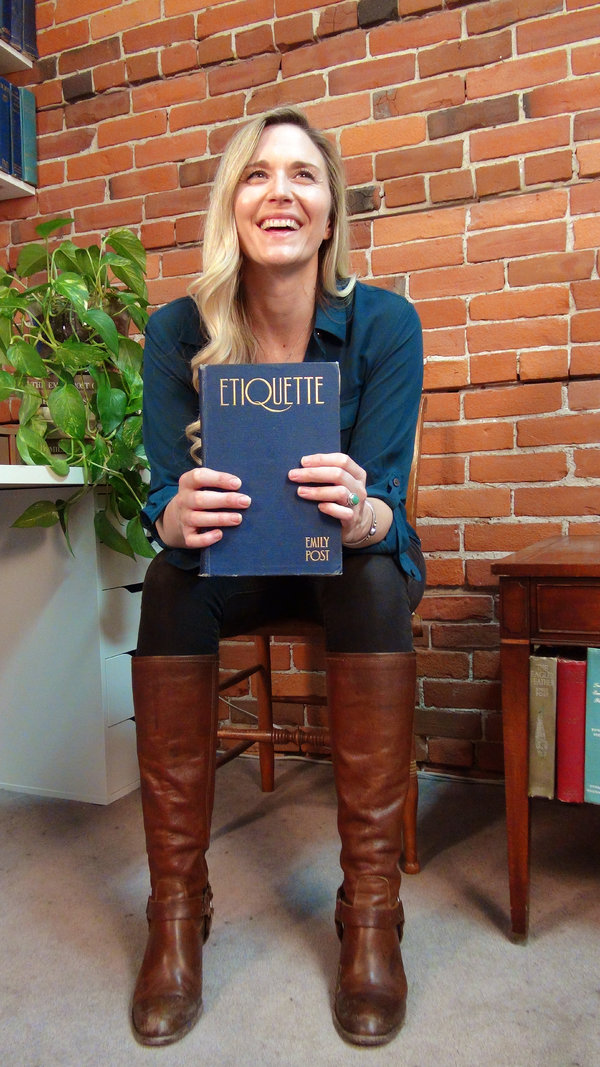 “Higher Etiquette” is packed with concerns of which Emily Post could never have dreamed. Is it O.K. to “hang with” your delivery people? Maybe a bit, Post suggests, but don’t invite them in to play video games or allow them to “get involved in roommate or relationship dramas.”

Don’t slobber on the pipe. Don’t take too many hits at once. (“We all know that dude.”) Try not to dreamily repeat “I’m so high” over and over again. Don’t go robotic and mindlessly scarf all the munchies. Don’t assume we want to hear your theory of existence, at least not right now.

Post considers pot and table settings, a brave new world for sure. About vape pens, she writes, in a passage that would make certain hosts and hostesses of my acquaintance have instant Fred Sanford-style heart attacks, “they may be placed to the right of the setting or across the top of the setting either between the place card and dessertware or behind the place card.”

“Higher Etiquette” argues that it’s time for cannabis to move, in the public imagination, away from its surfer and “Cheech and Chong” image. To that end, Post is interested in language. Avoid the stigmatizing term “pothead,” she advises. Mostly avoid “marijuana,” too. It has a slew of undeserved negative connotations and, anyway, it isn’t a scientific term. The term “weed,” to some, is totally disrespectful of the noble plant.

Post suggests you find yourself a good “budtender,” and tip well because he or she probably makes minimum wage. She’s fun to read on good strains, the way Auberon Waugh used to be fun to read on good wine. Waugh once wrote that the only wine that paired well with pot was Deinhart’s Hochheimer Konigin Victoria Beng Riesling Kabinett, which I thought was a joke tipple until I looked it up.

Post made me long to try a strain called Jack Herer, with its strong piney smell. It makes you feel, she writes, “clear, focused and uplifted.” This would be preferable to my standard post-pot comportment, which is muddled, teary and curled under the dinner table.

In Post’s gentle world, someone would surely help me to my bed and leave behind a glass of cool water. As she writes, “Etiquette can be so easy.”

Higher Etiquette
A Guide to the World of Cannabis, From Dispensaries to Dinner Parties
By Lizzie Post
Illustrations by Sam Kalda
163 pages. Ten Speed Press. $18.99.