Home » Books » ‘Not Bad for a Woman’: The Indignities of Life for Yale’s First Female Students

‘Not Bad for a Woman’: The Indignities of Life for Yale’s First Female Students

As a female graduate of Yale, I’d always assumed that the story of women’s admission to the college in 1969 was one of triumph — a historic transformation commemorated by Maya Lin’s “Women’s Table” sculpture, prominently situated at the heart of campus.

But “Yale Needs Women,” Anne Gardiner Perkins’s lively and engaging account of the college’s first class of female students, shows that the reality was far more complicated. It was one thing to let women in the door; it was quite another to make them feel welcome, integrated and equally represented in Yale’s deeply entrenched male culture.

Among the women Perkins writes about are Connie Royster, whose aunt Constance Baker Motley was the first black woman to serve as a federal judge, and whose family worked as chefs and managers in Yale’s fraternities; Kit McClure, who played trombone and became a member of the New Haven Women’s Liberation Rock Band; Shirley Daniels, who became active in the Black Student Alliance and focused on Afro-American studies; and Lawrie Mifflin, a field hockey player who struggled to establish a women’s team and went on to work at The New York Times as a reporter, editor and executive.

The challenges these women faced ranged from formidable hurdles like Yale’s “thousand male leaders” quota — under which more than 1,000 places were reserved for men and just 230 for women — to smaller indignities like a professor who wrote, across one assignment, “Not bad for a woman.” 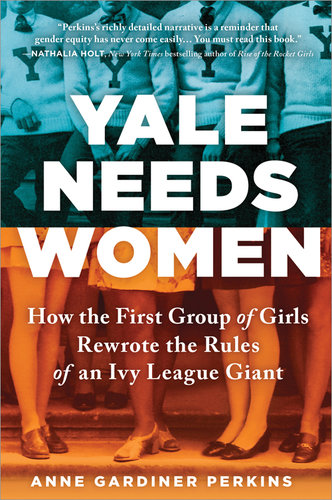 Further slowing the pace of change was the dearth of female professors and administrators. In 1968, the year before it went coed, “Yale College had two tenured women on its faculty — and 391 tenured men,” Perkins reports. The first time female students encountered a (visiting) woman professor “was like a door opening up to an incredible room they had not even known was there.” Moreover, Yale’s president, Kingman Brewster, proved to be a powerful obstacle to women’s progress at the college, insistent on enforcing the male quota and unwilling to entertain opposing arguments.

One of the few administrators making that case was Elga Wasserman, whom Brewster appointed head of coeducation at Yale but refused to grant the title of associate dean — instead relegating her to “special assistant.” Wasserman served as the necessary squeaky wheel in advocating for women’s interests, including safety on campus, but paid dearly for her activism. She was excluded from decision-making meetings, her memos ignored, her manner criticized.

As Perkins makes clear, the issue of educational parity competed with other strains of social ferment, including Vietnam War protests, the civil rights movement and the sexual revolution. Raising awareness about the rights of women at Yale required making waves, and every bit of progress was hard won.

In absorbing detail, Perkins describes the organizing efforts of those early years, from a protest by freshman women at an alumni lunch to the creation of advocacy groups like Women and Men for a Better Yale and petitions like one signed by 1,900 students calling for an end to gender quotas.

Just being on campus didn’t amount to belonging on campus. Women were not allowed in at Mory’s, the traditional campus pub restaurant, during lunch, when faculty meetings often took place. They had to put up with constant questions about their sexual availability and the busloads of women still imported from other colleges — known as “the weekend women” — for the pleasure of male students. Mifflin and her hockey cohort were obliged to practice in a football stadium parking lot where they dodged the detritus of weekend tailgates (briquettes and beer cans). Their coach was a high school gym teacher; their uniforms hand-me-downs from a local state school.

Reading the book, it was amazing to realize that during my first days at Yale, in 1983, the gender quota had been abolished only 11 years before, and that women had been present for just 14. It’s no wonder, as Perkins notes, that there remains a considerable distance to go. While women now make up 49 percent of Yale’s undergraduate student body, she reports, they comprise just 26 percent of the tenured faculty.

“Courage and tenacity, of course, are not unique to Yale women, and neither are the challenges they have faced,” Perkins writes. “There are women who have gone first and women who have spoken out in every town and city in this country. The nation needs still more of them. The battle to make Yale and other colleges and workplaces safe and fair places for women is not yet done.”

Robin Pogrebin, who graduated from Yale in 1987, is a culture reporter for The Times and a co-author, with Kate Kelly, of “The Education of Brett Kavanaugh: An Investigation.”

YALE NEEDS WOMEN
How the First Group of Girls Rewrote the Rules of an Ivy League Giant
By Anne Gardiner Perkins
367 pp. Sourcebooks. $25.99.