Obama and Springsteen to Publish Book Based on Their Spotify Series Crown is publishing “Renegades: Born in the USA,” a book adaptation of the podcast conversations. 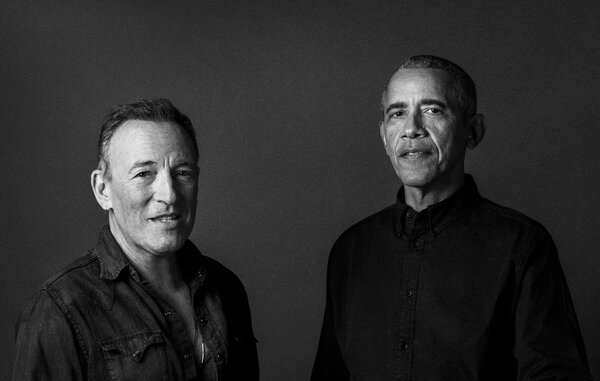 In “Renegades,” a podcast collaboration between Barack Obama and Bruce Springsteen, the former president acknowledged that it was, at a glance, an odd partnership.

“On the surface, Bruce and I don’t have a lot in common,” he said. “He’s a white guy from a small town in Jersey; I’m a Black guy of mixed race, born in Hawaii, with a childhood that took me around the world. He’s a rock ‘n’ roll icon. I’m a lawyer and politician — not as cool.”

But they have become vacation buddies and avid collaborators whose podcast — a series of frank conversations about race, fatherhood, social justice and American identity — became one of the podcasts with the most listeners around the world on Spotify.

Now, they will be co-authors of sorts, with the coming release of a book of their conversations. This October, Crown, an imprint of Penguin Random House, is publishing “Renegades: Born in the USA,” a book adaptation of the podcast. The 320-page book includes introductions by Obama and Springsteen, more than 350 photos and illustrations, and archival material such as Springsteen’s handwritten lyrics and Obama’s annotated speeches.

In his introduction, Obama describes how the conversations grew out of “our ongoing effort to figure out how it is that we got here, and how we can tell a more unifying story that starts to close the gap between America’s ideals and its reality.”

As salable book ideas go, a collaboration between a rock star and a former president seems a sure bet. (Crown is suggesting a list price of $50 in the United States and $65 in Canada.)

Springsteen’s memoir, “Born to Run,” which was released by Simon & Schuster in 2016, was a hit, selling nearly half a million hardcover copies in its first few months on sale. Obama’s 2020 memoir, “A Promised Land,” which was published by Crown, has sold 8.2 million copies globally, and nearly five million in North America.

The book version of “Renegades” also marks the latest release from the Obamas’ growing media empire. It is being produced in partnership with Higher Ground, the company founded by Barack and Michelle Obama, which has struck exclusive production deals with Netflix for film and television and with Spotify for podcasts. The Obamas sold their memoirs to Crown in 2017 for a record-breaking $65 million. Michelle Obama’s memoir, “Becoming,” sold more than 16 million copies globally since its release in 2018.

Obama and Springsteen got to know each other in 2008 while Obama was campaigning, and became friends over the years. Springsteen performed at the White House in January 2017, as Obama was preparing to leave office.

In their podcast conversations, the pair largely focused on personal stories about their lives and avoided partisan politics, but spoke generally about the urgent need to understand and address divisions in American society.

“This is a time of vigilance when who we are is being seriously tested,” Springsteen writes in his introduction to “Renegades. “Hard conversations about who we are and who we want to become can perhaps serve as a small guiding map for some of our fellow citizens.”