Home » Books » People Like Her Didn’t Exist in French Novels. Until She Wrote One.

People Like Her Didn’t Exist in French Novels. Until She Wrote One. Fatima Daas’s debut book explores the writer’s conflicted identities as a lesbian, Muslim woman with an immigrant background. In France, it was an unlikely literary hit. 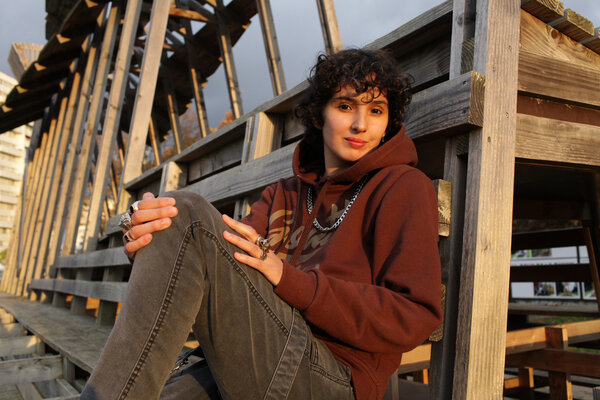 PARIS — Fatima Daas was used to not reading about people like her. Her debut novel was a chance to remedy this.

Based on her own life, that book, “The Last One,” follows a young, lesbian Muslim woman in a tough Paris suburb who struggles to reconcile her conflicting identities.

“I grew up with the idea, whether in films or in books, that I did not exist,” Daas, 26, said in a recent phone interview. “I didn’t exist as a young lesbian, Muslim woman, with an immigrant background,” she added. “So the question I have asked myself a lot is, ‘How do we shape ourselves when we have absolutely no representation?’”

Representation and identity are fraught topics now in France, a country that prides itself on a universalist tradition that unites all citizens under a single French identity — regardless of their ethnicity or faith. Identity politics are often seen as a threat to social cohesion.

So Daas’s book was an unlikely hit when it came out here last year. Critics praised the novel’s powerful lyricism, and hailed the author for breaking taboos around gender, sexuality and religion. “The Last One” won best debut novel in the 2020 Les Inrockuptibles Literary Prize, organized by the French cultural magazine, and has since been translated into eight languages. It will be released in the United States by Other Press on Nov. 23.

“Fatima Daas” is a pseudonym, and it is also the name of the novel’s main character. The author said her book was autofiction, a form of fictionalized autobiography, but how much is true and how much is made up is left for the reader to guess.

Daas declined to give her real name, partly because she didn’t want to involve her family, she said. But she added that using a pseudonym was in line with her playful exploration of multiple identities: It was about “creating and embodying a character, of reinventing myself” she said.

Each chapter of the novel begins “My name is Fatima,” and is followed by an affirmation, like, “I am French,” “I am Algerian,” “I’m named after a symbolic figure in Islam.”

The narrative is punctuated with flashbacks to the main character’s childhood and adolescence. The youngest of three sisters in a Muslim family from Algeria, and the only one born in France, Fatima struggles to fit in at school and has romantic relationships with women, even though she considers homosexuality a sin. She battles feelings of shame, but refuses to give up any part of herself.