The wait is over for the first volume of Barack Obama’s presidential memoirs, “A Promised Land,” which came out on Tuesday.

But as a slew of articles calling the book’s arrival “long-awaited” and “highly anticipated” suggest, it was a considerable wait. Obama took three years and 10 months to publish — longer than any other American president in the last century.

The chart below shows the history. With the exception of presidents who died in office and George H.W. Bush, who never wrote a standard presidential memoir, no modern president has taken as long to publish after leaving the White House. 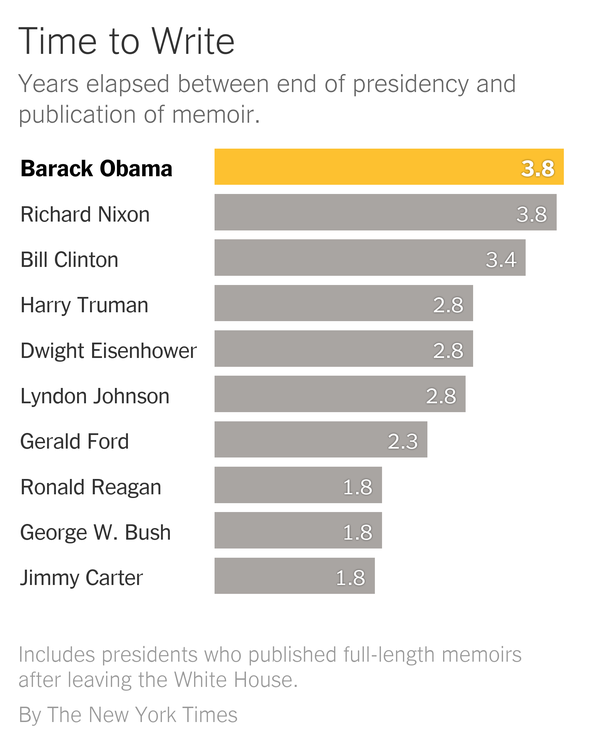 What accounts for Obama’s comparatively slow pace? A look at how he crafted his memoir, and how past presidents approached theirs, suggests some answers.

First, Obama’s book is long. While he “initially planned to write a 500-page memoir and be done in a year,” The Times’s Jennifer Szalai explained in a review, the book ended up stretching nearly 800 pages and taking more than three times longer to complete. And that’s just volume one; a second remains in the works.

Even so, other presidents have published similarly lengthy memoirs in less time. Bill Clinton’s “My Life” appeared less than three and a half years after he left the White House and weighed in at around 1,000 pages. Harry Truman published the first installment of his two-volume memoirs a full year faster than Obama published his.

Obama’s meticulous approach — and insistence on writing the book himself — offers a second clue. “Obama is a genuine literary stylist,” said Jonathan Alter, the author of two books about the 44th president. “And anybody who has ever tried to be one knows that it can be like squeezing blood from a stone.”

In an Atlantic interview, Obama confessed to laboring for hours over single paragraphs. “As I understand it, he writes in a very classic way,” said Peter Osnos, who in 1995 published “Dreams From My Father,” Obama’s first memoir, at Times Books, then an imprint of Random House. “He sits down with a pen and a pad.”

Obama also seems to have eschewed tactics embraced by other presidents who also wrote their own books. He has admitted to struggling to keep a consistent diary while in the White House, a useful aid for past presidential memoirists. Jimmy Carter drew heavily on his diaries to write “Keeping Faith,” which came out a brisk 21 months after he left office.

“His discipline allowed him to write it quickly,” said Alter, the author of a new biography of Carter. “Diaries help you speed the completion of your memoirs, and what slows them down is writing them yourself.”

Clinton took a different tack, hiring a former foreign policy speechwriter, the historian Ted Widmer, to interview him at length about his early life. Widmer then had the interviews transcribed and sent to Clinton, where they became grist as the former president wrote.

“It’s hard to look at a blank piece of paper and wonder what to say, especially if you’re a former president trying to write for millions of readers,” said Widmer, a professor at the Macaulay Honors College at the City University of New York. “He understood intuitively that talking was a great way to begin.”

Other presidents, such as Lyndon Johnson and Ronald Reagan, were able to publish their books faster with the help of aides and ghostwriters. Obama’s publisher, Crown, said aides assisted him with research, but he wrote the memoir himself.

Reagan’s “An American Life,” which appeared less than two years after he left office, was largely ghostwritten; Reagan had little zeal for the project. “He used to jokingly refer to it as the monkey on his back,” said Mark Weinberg, a former aide. “He didn’t want it to dominate his post-presidency life.”

Richard Nixon came the closest to surpassing Obama’s timeline, though for different reasons. Holed up in his San Clemente, Calif., property with the handful of aides who helped draft his 1978 memoir, “RN,” Nixon had to contend with litigation stemming from the Watergate scandal.

“There were lawsuits that he had to defend against, and the Congress was still tracking him down,” said Ken Khachigian, a former staffer who assisted with both Nixon’s book and his legal defense. “The experience, day to day, was not fun.”

Presidential memoirs are “a really hard genre,” said Craig Fehrman, the author of a history of presidential books. “We’ve seen lots of presidents with lots of talented aides, and ghostwriters too, take swings at this genre and struggle.”

Despite selling well, the books often resist lively prose, genuine introspection and fluid storytelling, he said, and they can quickly derail amid policy wonkery, self-justification or score-settling.

Fehrman believes that Obama’s book could be an exception. “You don’t have to look far to find a literary writer who misses deadlines and goes on long bouts of self-contemplation,” he said. “On paper, he seems like the president who could break the streak.”