"I find the world is a tremendously exciting place," says Geoffrey Blainey. "I wish I had another 100 years to see what happened."

He would like to know, among other things, how climate change will work out.

"Climate change is the most difficult and interesting intellectual argument of the last 100 years," he declares.

Blainey – Australia's best-known and sometimes most controversial historian – is not known for slotting easily into one side of any debate, however. 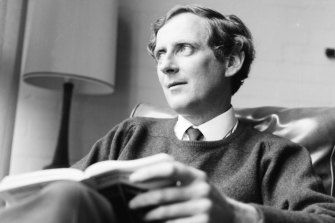 Professor Geoffrey Blainey had just been appointed Professor of Economic History at the University of Melbourne. June 1968.Credit:The Age Archives

He once taught a Melbourne University class in climate history, and though he has no argument with the fact that Earth's climate has been warming, he takes issue with the idea that it is a unique event and therefore requires a unique, modern explanation limited to human behaviour.

"The great period of climate change in Australia's human history was in Aboriginal times, when the seas rose and cut off Tasmania and cut off New Guinea from Australia," he says.

He adds that ice-core samples from Antarctica have shown as recently 1173AD – the time of Francis of Assisi – marked the start in Australia of a 39-year drought.

"You have to be very careful that you've got good explanations for the past as well as for the present."

He knows he is tempting a new public row with him in the centre of it, but he's been there before, and survived. Besides, he says, ehe doesn't presume to know the answers to his own questions. 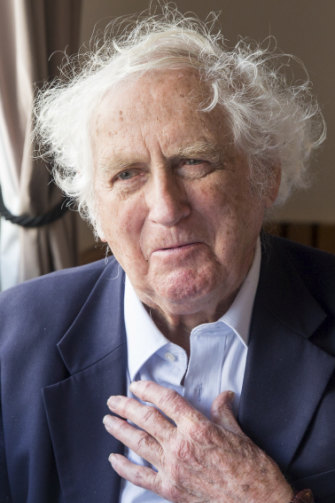 Professor Blainey was the son of a Methodist minister.Credit:Paul Jeffers

Blainey is taking lunch at Geppetto Trattoria, a cosy Italian restaurant in East Melbourne, where he and his wife Ann, a biographer, have dined regularly for more than 30 years.

Yet this man who has adventured across the Australian landscape and often enough, deep beneath its crust – his first books were about mining's importance to modern Australian history – had never ventured to Geppetto's second floor.

Our host Adriano Cea, whose father, Nino, established Geppetto in 1981, is hesitant when I suggest a table upstairs. It would be quieter than the busy buzz on the ground floor, I say.

The "professore" is no longer a young man, Adriano gently points out, referring to Professor Blainey in the Italian manner, and the stairs are steep.

It is true. Professor Geoffrey Norman Blainey, the author of close to 40 books, some of which have changed forever the way Australians understand their history, is 89.

But reading his new memoir, I was taken by the physical robustness of Blainey's younger life. 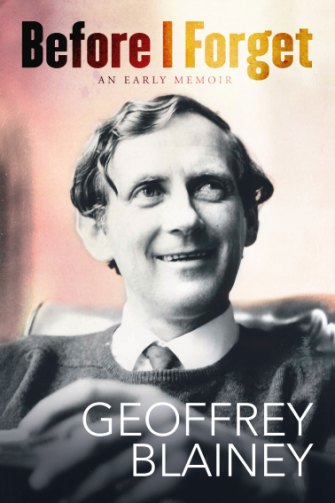 Before I Forget: An Early Memoir by Geoffrey Blainey.Credit:

Once, as a boy, he rode his pushbike against a stiff south-westerly, his belongings in a Gladstone bag on the handlebars, 160 kilometres from Melbourne to work on an uncle's farm at Cororooke, a village north-west of Colac. He left before 7am and arrived, without a headlight, a bit before 11pm.

His legs all these years later could surely handle a couple of flights of stairs, I suggest to Adriano.

And sure enough, the professor arrives without fuss, his famous white hair all a-tangle, and declares some delight at this new experience of a table by a window with a clear view to the light towers of the MCG.

Australian football has been a passion since Blainey was a child playing kick to kick in the school playground with a "ball" made of rolled up newspaper, imitating heroes from the Geelong Football Club, of which he is a lifelong supporter.

He is also the author of the definitive A Game of Our Own: The Origins of Australian Football (1990).

Soon, however, despite the pleasing view, he finds the glare through the window too harsh and shifts seats.

Adriano has brought a plate of house-baked focaccia served with black olive tapenade (focaccia della Casa). We order drinks: Tenuta Maccan Pinot Grigio "Grave" for the professor; a Ruggeri prosecco for me. 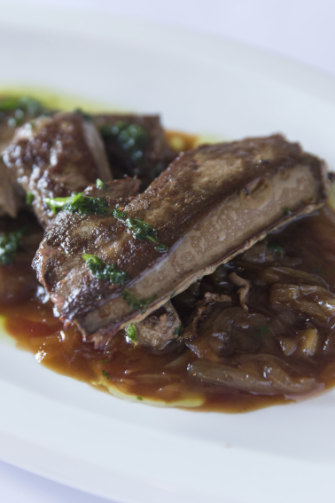 The liver and caramelised onion at Geppetto.Credit:Paul Jeffers

It proves to be a long lunch, but we eat sparingly.

We each choose an entree of crumbed sardines, which Nino has chosen at the markets that morning. The dish proves delicious.

The professor chooses a second entree of farfalle pasta, with tomato, pulled pork and mushrooms. And because we share a few stories about starting life in rural Australia, I opt for the offal (frattaglie): lamb liver in red wine and onion reduction.

Climate change not withstanding, we are at lunch to discuss, among other things, Blainey's latest book. 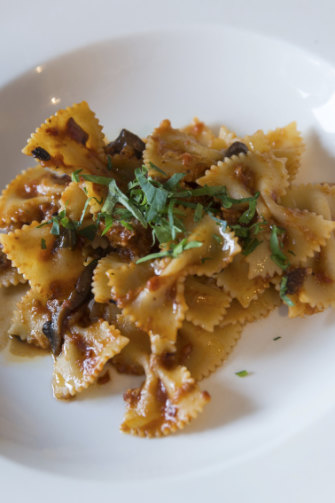 The farfalle with tomato, pulled pork and mushrooms.Credit:Paul Jeffers

Finally, he has turned his powers of historical observation on his own life, or part of it. Before I Forget, he has called it. An Early Memoir, his publisher has added.

Blainey has a mind that takes unexpected excursions, and he speaks of the musical nature of words and their sounds.

He says the two ''f'' sounds in the title are pleasing to him, just as the sound of his most successful title, The Tyranny of Distance, has lasted to the point the phrase has entered the language. He writes in his memoir that once he had settled on the title back in the 1960s "I sensed that the two key words sat in a kind of harmony, for each contained in a key place the letter ‘t' and the letter ‘n'. The combined sounds proved to be arresting or attractive to many readers.'' 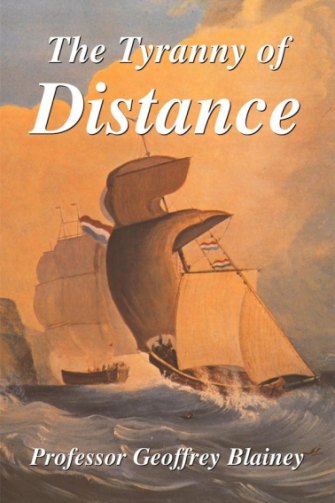 The Tyranny of Distance by Geoffrey Blainey.Credit:

Blainey, thus, is as much composer as historian. Still, he says his actual musical interests in some weeks extend not much further than brass bands and the 19th-century hymns he grew to love in his childhood. He admits he has also been to dozens of operas. "My wife loves them."

Before I Forget covers a bit more than his first 40 years, beginning with his childhood as the son of a Methodist minister, the family moving from Victorian town to town every few years. It finishes at the start of the 1970s when, he writes "I entered my early 40s and was still learning to be a historian; but history itself, and the importance of it in national life, was changing faster than I was."

Along the way it reveals young Blainey had the extraordinary fortune of winning a scholarship open only to the sons of Methodist ministers aged 13 who lived more than 48 kilometres from Melbourne.

His family lived in Ballarat and there was only one other applicant. The scholarship – "perhaps the most benevolent in the land" – offered full board and tuition at Wesley College, complete with pocket money, an allowance for textbooks and train fares to and from Melbourne. It came from the estate of Howard Hitchcock, the original sponsor of the construction of the Great Ocean Road.

Blainey thus vaulted to a world of privilege and learning that led to more scholarships to Queens College and Melbourne University. 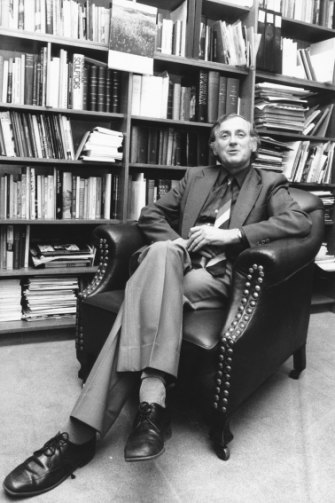 Blainey in 1982 when he was Dean of the Arts Faculty at Melbourne University.Credit: Fiona McDougall

What might have become of him without such opportunities, I ask?

"I suppose the chances were at that time I might have become a bank manager or something like that," Blainey muses. "I never expected to go to university."

Lest anyone be concerned that the subject of Before I Forget is an unsatisfactorily short span of such a long life, there is a short sentence on page 319 that suggests Geoffrey Blainey may not be finished with autobiography yet.

"I must end this story, for the time being," he writes. I inquire whether there is another in the works, covering the next 50 years.

"Well, I don't know," says Blainey. "I started writing this one about 2001 – I thought I was getting older and my memory might go and I wanted very much to write about my childhood. I wrote very quickly, and then I thought I'd continue and write something about learning to be a historian because it's all continuous and so I did that. And then I suddenly came to a stop at the early 1970s." 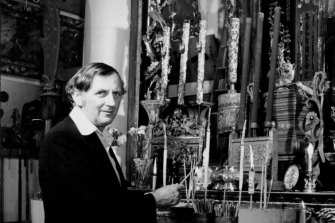 Geoffrey Blainey visits a joss house for his television program in 1982.Credit:

His publisher, Penguin, wanted more, covering the second half of Blainey's life, but he baulked and is still thinking about whether to tackle it.

Meanwhile, he is considering writing a book of the sea, a sort of extension to The Tyranny of Distance.

"Maybe I didn't want to write about the more recent events," he says, musing about why he stopped his memoir in the early 1970s.

Those events include the well-documented controversy that engulfed him in the 1980s when he criticised Australia's high level of Asian immigration at a time of high unemployment.

He was attacked in the media and in academia, and though he insists his was a view that accorded with wider Australia (as a Gallup poll showed), a group of colleagues accused him publicly of "racialist" views, politicised students marched against him and broke into a tutorial, and the University of Melbourne told him that on security grounds it was cancelling his public appearances for 1984.

The debate became so wearying he resigned in 1988 from the university. It was a huge statement: he had begun teaching economic history at Melbourne in 1961, was made a professor in 1968, was granted the Ernest Scott chair in history in 1977 and was appointed dean of the Faculty of Arts in 1982.

"I had a lot of support in the university and if I wanted to fight, I could have won. But I thought resigning would be the sensible thing to do, so I could have a life where I was free to say what I want."

At 89, he is doing just that. But he rejects being tagged a conservative. "I'm a radical," he says. "I am pro-change." 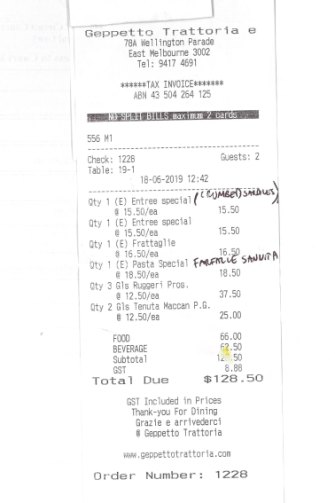 Receipt for lunch at Geppetto Trattoria.