Home » Books » Read It and Scream

Read It and Scream Overcoming dark times is the point of every scary story ever told. Whether it be pestilence or zombies, ravenous phantoms or vengeful witches, killers or psychos or ghouls from the beyond — the dramatic experience of being afraid, and the exhilaration of living through what we fear, bolster our will to survive. It may be as ancient as our ancestors telling stories around a fire, or as modern as a night alone with a horror novel, but the experience of imagining that which frightens us is a deeply human defense for life’s pageant of horrors.

Horrors of the mind are at play in Catriona Ward’s brilliant new novel, THE LAST HOUSE ON NEEDLESS STREET (Tor Nightfire, 319 pp., $27.99), a terrifying exploration of human consciousness that excavates character like an ice pick chipping through an ancient glacier: The deeper one goes, the chillier it gets.

On the surface, the novel has a rather typical horror premise — a child, Lulu, goes missing at a lake, leaving an older sister desperate to find her. But as the story progresses, a far more startling and complicated plot emerges, one that has less to do with Lulu or the kidnapping, and more to do with how the human consciousness copes with the threat of violence.

The novel is told by a chorus of characters who unspool their experiences in first person. These perspectives are then buttressed by a third-person narrative that follows Lulu’s sister as she attempts to hunt down the kidnapper. At first, this shifting among characters feels disorienting, and the choice to include a cat’s point of view verges on silly, but as the novel builds momentum, the structure makes sense. These multiple narrators are like pieces of a cracked mirror, each shard reflecting a central fracture.

Indeed, fragmentation is the point. When a crank psychiatrist known as “the bug man” theorizes that our idea of the “self” doesn’t exist, and that “each living thing and object, each stone and blade of grass, has a soul, and all these souls together form a single consciousness,” Ward’s ambitions become clear: This isn’t a novel about a kidnapping, but a deeply frightening deconstruction of the illusion of the self. In an afterword, Ward writes that she “wrote a book about survival disguised as a book about horror.” In fact, she’s written a novel of existential dread that explores the nature of humanity, our connection to God and the universe, and the monstrosity of that connection. 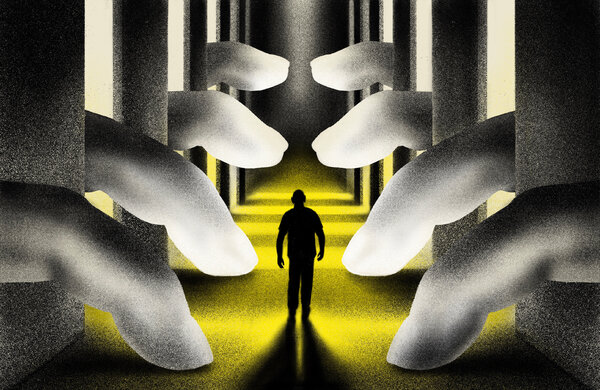 Tananarive Due’s spellbinding THE BETWEEN (Harper Perennial, 287 pp., paper, $16.99) opens with 7-year-old Hilton James finding his beloved grandmother dead on the floor, “cold as just-drawn well water.” Hilton runs for help but when he returns, Nana is alive, sort of — she has slipped into a strange state of in-betweenness, a place between life and death where the laws of reality no longer apply.

Decades later, married and the head of a rehab center, Hilton is triggered into this state himself when a white supremacist threatens his wife, Dede, a newly elected judge, and their children. As Hilton tries to stop the man, his reality began to distort and twist, leaving him in a sunken place between terror and doubt.

“The Between,” Due’s debut novel, was originally published in 1995, but it feels as relevant as anything written in 2021, a sad testament to the fact that white supremacy hasn’t diminished in the past decades. There is a pointed political and social layer to this novel that, when juxtaposed with the internal terrors of Hilton’s life, creates a complex portrait of the Black experience in America, one in which aggression, gaslighting and the need to assess and reassess threats, real and imagined, are the stuff of daily life. “While Black horror is a much more recognized and appreciated subgenre than it was when I wrote this novel, the social fears that helped create it are still alive and well,” Due writes in the preface of this new edition. “Some monsters never die.”

Due brings readers into this experience with eerie, beautiful prose that gives the novel a shimmer of the otherworldly. There is a moment when Hilton sees a woman hovering in the “murky phosphorescent gray-green mist” coming off a swimming pool only to discover, when he looks closer, that it is Nana. Is it a ghost? A memory? Or simply refracted light in fog? Thanks to the constant blurring of reality and hallucination, nightmare and memory, the reader becomes as unsettled as Hilton.