Stephen F. Cohen, an eminent historian whose books and commentaries on Russia examined the rise and fall of Communism, Kremlin dictatorships and the emergence of a post-Soviet nation still struggling for identity in the 21st century, died on Friday at his home in Manhattan. He was 81.

His wife, Katrina vanden Heuvel, the publisher and part owner of The Nation, said the cause was lung cancer.

From the sprawling conflicts of the 1917 Bolshevik revolution and the tyrannies of Stalin to the collapse of the Soviet Union and Vladimir V. Putin’s intrigues to retain power, Professor Cohen chronicled a Russia of sweeping social upheavals and the passions and poetry of peoples that endured a century of wars, political repression and economic hardships.

A professor emeritus of Russian studies at Princeton University and New York University, he was fluent in Russian, visited Russia frequently and developed contacts among intellectual dissidents and government and Communist Party officials. He wrote or edited 10 books and many articles for The Nation, The New York Times and other publications, was a CBS-TV commentator and counted President George Bush and many American and Soviet officials among his sources.

In Moscow he was befriended by the last Soviet leader, Mikhail S. Gorbachev, who invited him to the May Day celebration at Red Square in 1989. There, at the Lenin Mausoleum, Professor Cohen stood with his wife and son one tier below Mr. Gorbachev and the Soviet leadership to view a three-hour military parade. He later spoke briefly on Russian television to a vast audience about alternative paths that Russian history could have taken.

Loosely identified with a revisionist historical view of the Soviet Union, Professor Cohen held views that made him a controversial public intellectual. He believed that early Bolshevism had held great promise, that it had been democratic and genuinely socialist, and that it had been corrupted only later by civil war, foreign hostility, Stalin’s malignancy and a fatalism in Russian history.

A traditionalist school of thought, by contrast, held that the Soviet experiment had been flawed from the outset, that Lenin’s political vision was totalitarian, and that any attempt to create a society based on his coercive utopianism had always been likely to lead, logically, to Stalin’s state terrorism and to the Soviet Union’s eventual collapse.

Professor Cohen was an enthusiastic supporter of Mr. Gorbachev, who after coming to power in 1985 undertook ambitious changes to liberate the nation’s 15 republics from state controls that had originally been imposed by Stalin. Mr. Gorbachev gave up power as the Soviet state imploded at the end of 1991 and moved toward beliefs in democracy and a market economy.

A prolific writer who mined Soviet archives, Professor Cohen first came to international attention in 1973 with “Bukharin and the Bolshevik Revolution,” a biography of Lenin’s protégé Nikolai Bukharin, who envisioned Communism as a blend of state-run industries and free-market agriculture. Critics generally applauded the work, which was a finalist for a National Book Award.

“Stephen Cohen’s full-scale study of Bukharin is the first major study of this remarkable associate of Lenin,” Harrison Salisbury’s wrote in a review in The Times. “As such it constitutes a milestone in Soviet studies, the byproduct both of increased academic sophistication in the use of Soviet materials and also of the very substantial increase in basic information which has become available in the 20 years since Stalin’s death.”

After Lenin’s death, Mr. Bukharin became a victim of Stalin’s Moscow show trials in 1938; he was accused of plotting against Stalin and executed. His widow, Anna Mikhailovna Larina, spent 20 years in exile and in prison camps and campaigned for Mr. Bukharin’s rehabilitation, which was endorsed by Mr. Gorbachev in 1988.

Ms. Larina and Professor Cohen became friends. Given access to Bukharin archives, he found and returned to her the last love letter that Mr. Bukharin wrote her from prison.

In “Rethinking the Soviet Experience” (1985), Professor Cohen offered a new interpretation of the nation’s traumatic history and modern political realities. In his view, Stalin’s despotism and Mr. Bukharin’s fate were not necessarily inevitable outgrowths of the party dictatorship founded by Lenin.

Richard Lowenthal, in a review for The Times, called Professor Cohen’s interpretation implausible. “While I do not believe that all the horrors of Stalinism were ‘logically inevitable’ consequences of the seizure of power by Lenin and his Bolshevik Party,” Mr. Lowenthal wrote, “I do believe that Stalin’s victory over Bukharin was inherent in the structure of the party’s system.”

As Professor Cohen and other scholars pondered Russia’s past, Mr. Gorbachev’s rise to power and his efforts toward glasnost (openness) and perestroika (restructuring) cast the future of the Soviet Union in a new light, potentially reversing 70 years of Cold War dogma.

As Mr. Gorbachev arrived in Washington for his 1987 summit with President Ronald Reagan, The Times wrote, “With an irreverence for precedent and an agility uncommon in Soviet leaders, he has disrupted old assumptions about Soviet impulses, forced reappraisals of Soviet purposes and rendered less predictable the course of East-West competition.”

Professor Cohen affirmed his support for Mr. Gorbachev in a March 1991 Op-Ed article in The Times. “He has undertaken the most ambitious changes in modern history,” he wrote. “Their goal is to dismantle the state controls Stalin imposed and to achieve an emancipation of society through privatization, democratization and federalization of the 15 republics.” 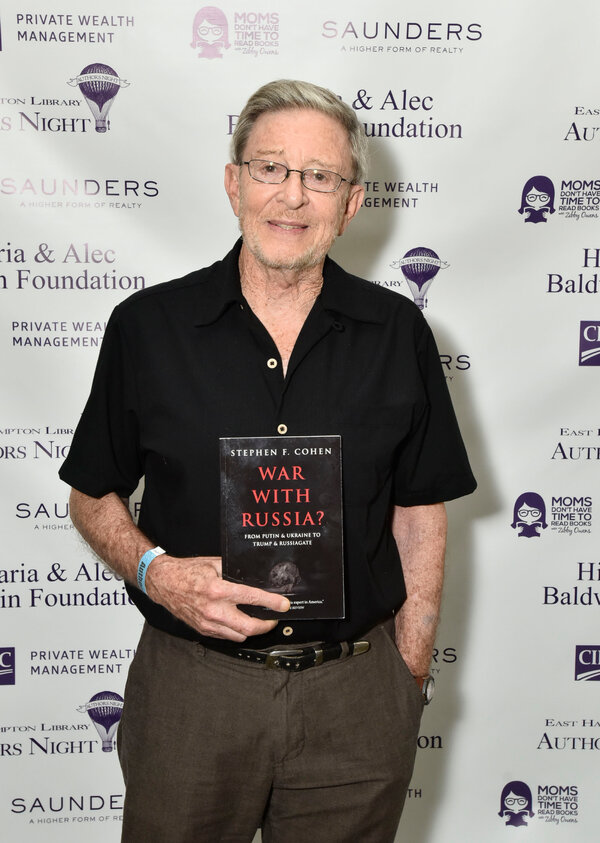 By 1997, as Professor Cohen saw it, the Russian economy had become “an endless collapse of everything essential for a decent existence.” He became a persistent critic of Mr. Yeltsin, who survived an attempted coup and tried to promote democracy but resigned in 1999 amid growing internal pressures. He was succeeded by his deputy, Mr. Putin.

In his book, “Failed Crusade: America and the Tragedy of Post-Communist Russia” (2000), Professor Cohen laid the blame for Russia’s post-Communist economic and social collapse on the United States, for providing bad advice; on academic experts, for what he called “malpractice throughout the 1990s”; on Western journalists; and on Mr. Yeltsin, for a range of sins: abolishing the Soviet Union, creating a bureaucratic vacuum and generating hyperinflation with his economic shock therapy.

“Cohen’s thesis is that Yeltsin, rather than Russia’s first democratic leader, was a neo-czarist bumbler who destroyed a democratization process that, in fact, should be credited to Mikhail Gorbachev,” Robert D. Kaplan wrote in a Times review. “Cohen is particularly scathing toward American journalists, whom he depicts as overly influenced by the prosperity of a small, rapacious upper class in the major Russian cities, and who seldom ventured out into the countryside to see the terrible price of the reformers’ handiwork.”

Stephen Frand Cohen was born in Indianapolis on Nov. 25, 1938, the older of two children of Marvin and Ruth (Frand) Cohen. His father owned a jewelry store and a golf course in Hollywood, Fla. Stephen and his sister, Judith, attended schools in Owensboro, Ky., but Stephen graduated in 1956 from the Pine Crest School, a private school in Fort Lauderdale, Fla.

He loved the novels of Hemingway. As an undergraduate at Indiana University, he went to England on a study-abroad program. He had saved $300 for a side trip to Pamplona to run with the bulls. But an advertisement he saw for a 30-day, $300 trip to the U.S.S.R. changed his life.

Back at Indiana University, he gave up plans to be a golf pro and took up Russian studies. He earned a bachelor’s degree in economics and public policy in 1960 and a master’s in Russian studies in 1962. In 1969, he received a doctorate in that subject from Columbia University.

Professor Cohen’s marriage in 1962 to the opera singer Lynn Blair ended in divorce. He married Ms. vanden Heuvel in 1988. In addition to her, he is survived by a son, Andrew, and a daughter, Alexandra Cohen, from his first marriage; another daughter, Nicola Cohen, from his second marriage; a sister, Judith Lefkowitz; and four grandchildren.

His Columbia dissertation on Mr. Bukharin’s economic ideas grew into his first book, copies of which reached Soviet dissidents, the K.G.B. in Moscow, and eventually Mr. Gorbachev, who put Professor Cohen on his guest list for the 1987 Gorbachev-Reagan summit in Washington.

Professor Cohen taught at Princeton from 1968 to 1998, rising to full professor of politics and Russian studies, and at New York University thereafter until his retirement in 2011. His last book, published in 2019, was “War With Russia? From Putin & Ukraine to Trump & Russiagate.”

In a recent interview for this obituary, Professor Cohen denied that he had “defended” Mr. Putin.

“From the moment Yeltsin came on,” he continued, “Americans thought the Cold War was over. There was disappointment with Putin as a more rational leader. I see him in the Russian tradition of leadership, getting Russia back on its feet. He frightens some of our observers, but I didn’t see it that way.”