Alice Bishop is talking about the loss of her family home, incinerated during the 2009 Black Saturday inferno that swept across Victoria, killing 180 people, hundreds of animals, razing houses and blackening the landscape. 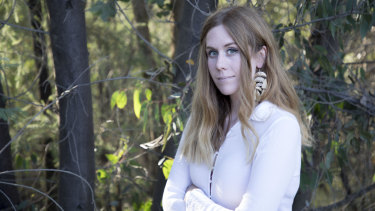 Alice Bishop says the notion of heroism has been hijacked by masculinity.

“We were told there were no direct risks, so we had a false sense of security. But nothing can prepare you for a bush fire like that; they said it had the heat of two Hiroshima bombs. Bush fires are obviously part of the natural land; what you come to expect, but not on this scale,’’ she says.

The Bishop home in Christmas Hills, about an hour north-east of Melbourne, has been rebuilt on the same patch of land, but its destruction inspired her debut book, A Constant Hum, a collection of short stories that reference the devastation wrought by bush fire, particularly those on February 7, 2009.

This year is the 10th anniversary of Black Saturday. What happened after the dust settles is examined by Bishop’s unflinching eye. Created like a patchwork quilt made up of different squares of insight, there are a multitude of voices, and a cast that spans all ages as the book tracks the aftermath of the disaster.

With scrupulous detail, 33-year-old Bishop notes not just the traumatised and dislocated victims directly affected but widens her ambit to incorporate those in service to the bereaved and the injured as well. 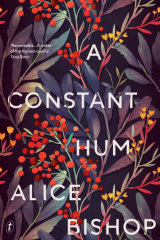 A Constant Hum by Alice Bishop.Credit:

Although this is fiction, all her characters have been triggered by the experiences of real-life people and situations. And while the subject matter may be loss, absence and mourning, the prose is clear-eyed and forensic. There’s none of the sensationalism of tabloid journalism, which is not to say that Bishop is dispassionate. She’s here as a multi-visionary witness, offering us accounts at and beyond the sites of damage years after the burn outs instead of writing in the centre of the emotional vortex.

Bishop derives a ‘‘distilled sense of meaning from short fiction’’ and enjoys reading and writing in this form. Divided into three sections that subtly suggest wind patterns (Prevailing, Southerly and Northerly) the further the reader moves through the pages, the more intense the stories.

‘‘Prevailing is what everything was like decades after the fact; southerly is a cooler wind but when you think of the hot northerly wind, that’s the peak of it, so the stories towards the end are more directly linked to the fear and displacement caused by fire,’’ she says.

Most of the stories are short; some are only a line or two. Each, however, has its own spin on the fire fall out. Hard lessons have been learnt by the survivors: there are quotes to be wrangled over the cost of underground bunkers, double-glazed windows and roof sprinklers; insurance claims to be filled, new homes to be found or built anew on the same scorched earth.

Many of the afflicted characters are women, stoically trying to cope with a changed emotional and physical landscape. Bishop was deliberate in her decision to reference them.

‘‘In white western culture, the notion of heroism gets hijacked by masculinity … in the media you constantly see CFA officers with ashy faces. Sure there are some truths to that but to me, there’s more truth in women’s strength that aren’t celebrated, like my mum’s quiet strength.’’

Thus in A Constant Hum, there’s Lindsay, who ‘‘had a reinforced understanding that everything was fleeting, haphazard; there was no point to stressing over every little thing’’. There’s also Linda, who’s at a trial, facing the arsonist who threw a cigarette out of the car window on the State’s hottest day on record, and as a consequence, destroyed her family. Elsewhere, a nurse working on the burns unit has to learn a new language: ‘‘septic wound, fluid resuscitation, topical antimicrobials, sooty septum checks and nasogastric tubes.’’

Bishop’s own words can be both confronting and poetic; the human remains are like ‘‘charred felled tree trunks’’; there are scars that look like ‘‘the rainbow insides of an abalone shell’’.

Since her family house has been re-built, she returns there at least once a week, commuting from her inner-city home, ‘‘I miss the bush. I get that pull if I don’t go back. It’s a real privilege to see the landscape grow back, and it’s still growing back, 10 years later.’’