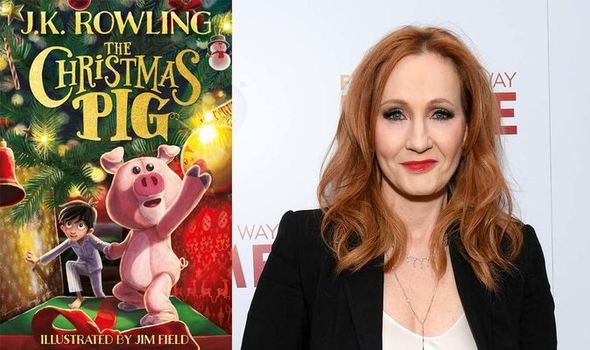 While we may never know what beloved object was lost in the sand that day, Christmas has come early for Rowling’s legion of fans as that story reaches children’s bookshelves at last.

After Jack’s parents split up, he and his mother start a new life 100 miles away from home and the lonely boy’s only confidante is his beloved toy pig DP (“Dur Pig”, as Jack called him when he started to talk).

Then his mother falls in love again and, on Christmas Eve, her boyfriend’s daughter Holly spitefully throws DP out of the car window as they speed along the motorway. Holly, wracked with guilt, gives Jack a replacement pig but the brand-new toy makes Jack miss DP all the more.

Then, that night, Jack’s toys wake him and explain that, on Christmas Eve, humans can enter the Land Of The Lost where there is a chance of Jack rescuing DP. The Christmas Pig, DP’s replacement, leads him there.

In the Land Of The Lost, objects from scissors and staplers to smartphones have come alive and are segregated across five nations depending on how valuable they were to their owners. Jack and the Christmas Pig travel the land on the trail of DP, from the dangerous Wastes Of The Unlamented to the idyllic Island Of The Beloved. Throughout, Jack must dodge the monstrous rulr The Loser, who gobbles up anything that breaks the rules.

It’s a richly imagined world where Rowling explores themes of love and loss with her trademark empathy and compassion. A JK Rowling book is for life, not just for Christmas.