In the spring of 1999, Louis Menand taught a class called “Art and Thought of the 1960s” at the Graduate Center of the City University of New York. He assigned Malcolm X, Joan Didion, “Portnoy’s Complaint.” Toward the end of the semester, he told his students he was thinking of writing a book about the ’60s.

Maybe he shouldn’t, they told him.

“So you can make a painting of a soup can — that’s not such a big deal,” Menand said, characterizing his students’ response. Sixties culture, he recognized, was a close ancestor of the culture of the day. “I realized,” he added, “that what they were really interested in was the ’50s, which they didn’t understand as well.”

Menand took his students’ note. The result, “The Free World: Art and Thought in the Cold War,” will be published by Farrar, Straus & Giroux on Tuesday. The book seeks to explain not the ’60s scene (though Andy Warhol, soup cans and all, does appear), but how the ground was prepared for it by the West’s most influential thinkers, authors and artists between 1945 and 1965.

“This book is the back story to contemporary American culture,” said Menand, 69, in a video interview earlier this month from Cambridge, Mass., where he is a professor at Harvard. “It’s about the emergence of an American culture that became central in world affairs.”

He began work on it around 2011, nearly a decade after his last large history book, the Pulitzer Prize-winning “The Metaphysical Club,” was published. He credited an office in the stacks at Harvard’s Widener Library — he secured it after 10 years on the waiting list; you can find him next to the Slavic periodicals — for helping him complete a book spanning more than 700 pages, not including endnotes.

While Menand, who goes by “Luke,” rejects the notion that his book tells the story of the baby boomers — “It’s 75 million people,” he said, “so they’re not all in ‘Doonesbury’” — writing “The Free World,” he conceded, meant writing about his own world.

“As you have probably guessed, this is the period I grew up in,” he writes in the preface. The book, he says, “was a way of filling in the blanks in my own story.”

Readers of “The Metaphysical Club” or Menand’s critical essays in The New Yorker, where he is a staff writer, will recognize the elegant, even-keeled prose in “The Free World.” He aspires to take readers by the hand and walk them through complex abstractions.

“The Free World” is more of a survey than “The Metaphysical Club,” which told an ambitious but contained story focused on four American thinkers of the philosophical school known as Pragmatism. Many major figures get the better parts of their own chapters in “The Free World”: Hannah Arendt, George Orwell, Isaiah Berlin, James Baldwin. French intellectuals play significant roles, with sections on Jean-Paul Sartre, the anthropologist Claude Lévi-Strauss and the film theorist André Bazin. The artists Menand spotlights are reminiscent of the roll call offered by the bohemians in the musical “Rent”: “Ginsberg, Dylan, Cunningham and Cage” (Menand’s pop-music chapter focuses on the Beatles).

“The Free World” does have a through line, gestured at by its title. Thinkers like Arendt and Sartre looked around the postwar landscape and concluded that freedom would be the era’s byword. And while they were certainly interested in political liberty, Menand in his telling focuses primarily on the era’s distinctive legacy of thinking about a freedom associated with self-knowledge. (Maggie Nelson, the author of “The Argonauts,” said that “On Freedom,” her book due out later this year, was partly inspired by Menand’s seminar in 1999, in which she was a student.)

“When you understand more clearly, in a demystified way, what your situation is, you have some agency, you have some freedom,” Menand said. “To me, that’s the right line to take.”

The quest for this kind of freedom recurs throughout the book — in the deconstructionism of Jacques Derrida, the anticolonial politics of Aimé Césaire, the feminism of Betty Friedan — before running aground in the tragic final chapter, which profiles the New Left activist Tom Hayden, a student of European existentialism, and closes with the American involvement in Vietnam and Western intellectuals’ reckoning with the question of whose interests their talk of freedom had served.

“It didn’t all turn out the way we hoped it would turn out, and Vietnam became a communist totalitarian state,” Menand said (“part of me thinks I should write a book about Vietnam,” he added). 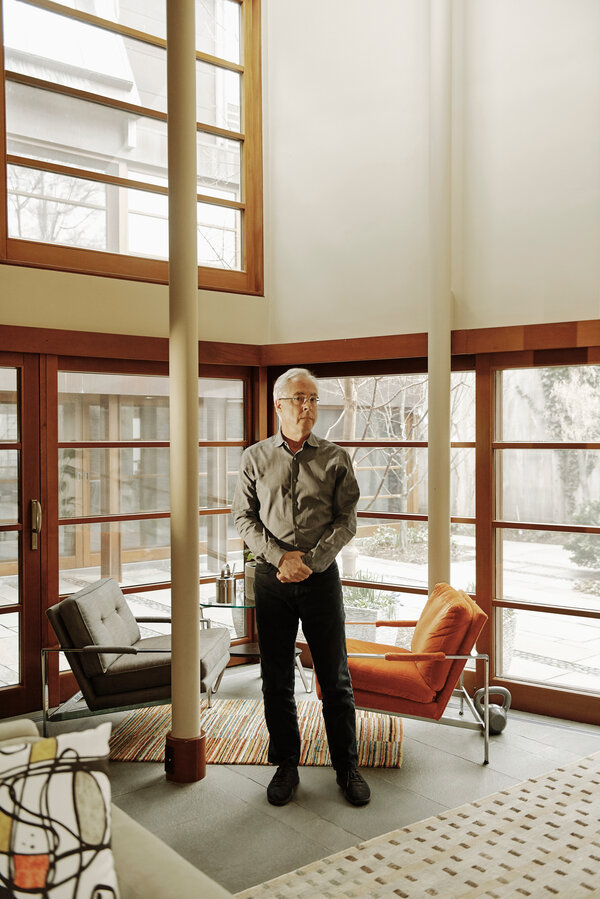 Menand relentlessly grounds his analysis in a larger context. In his telling, Arendt’s bleak view of European civilization arose from her repeated displacement as a German-born Jew. “Bonnie and Clyde” could be made in Hollywood in the ’60s not only because of the influence of the French New Wave but because of the lapsing of a rule that had banned movies from showing a gun firing and the bullet hitting its target in the same shot.

Amanda Claybaugh, a close colleague of Menand’s in Harvard’s English department before she became the school’s dean of undergraduate education, said that embedding ideas in stories is an “analytical mode” for Menand. “If you tell a story, you have to think in very concrete and specific terms about how culture works in a particular moment, how certain ideas, influences, encounters shape a person.”

How was Menand shaped?

He grew up in the Boston area, where his father was an administrator at the Massachusetts Institute of Technology. His great-grandfather, also Louis Menand (the author is technically Louis Menand IV), was a French horticulturalist with a successful flower business in upstate New York. Today, a village hugging the Hudson River just north of Albany is called Menands, after the author’s ancestor.

Menand left the East Coast for the only extended period of his life to attend Pomona College in Claremont, Calif., where he wrote poetry and ate meals under a large mural, “Prometheus,” by the Mexican artist José Clemente Orozco, which appears in “The Free World” as inspiration to Jackson Pollock. After a year of law school, Menand studied English at Columbia, earning a doctorate in 1980. He taught at Princeton before arriving at CUNY Grad Center in 1988, and landed at Harvard in 2003. He contributed to The New Republic and The New York Review of Books before becoming a staff writer at The New Yorker in 2001.

It is a life story that would not be out of place in, well, “Doonesbury.” But the boomers — who started being born in 1946 — were not really the ’60s generation, Menand said. Hayden and Mario Savio, the student activists of his final chapter, were born in 1939 and 1942, respectively. Menand, who is in the older half of his generational cohort, turned 18 in 1970.

Menand knew several of his book’s figures personally, such as Susan Sontag, who died in 2004. But his relationship to its events might best be exemplified by the literary critic Lionel Trilling. Menand went to Columbia in 1974 to study under Trilling and his acolytes, but ended up taking just one class with Trilling — a seminar on the poet William Wordsworth — before he died in 1975.

Menand’s timing might in others be a recipe for blinding nostalgia, even resentment. But he appears untroubled by the thought that he came too late.

He was compelled as a young man to contribute to the New York-centered “little magazines,” as Trilling and Sontag had; his byline appeared in Partisan Review and Dissent. But his goal even then was to appear in The New Yorker and Esquire, and these days he does not consider himself, he said, “to be writing in, or as an heir to, some sort of New York intellectual tradition.”

The little magazines were rife with intellectual disputation — “The Free World” covers an argument about Black literature that took place in their pages between the novelist Ralph Ellison and the editor Irving Howe in 1963 and ’64. Menand is the writer who explains such bouts, rather than one of the pugilists.

“I want everybody to agree with me,” he said, with a touch of self-deprecation. “I want to put things so perfectly that no one can disagree.”