Home » Books » The Giving Tree: love it or hate it?

The Giving Tree: love it or hate it?

I don't know exactly how many times I’ve read The Giving Tree to my two daughters. But it’s a lot. And to this day I can’t get to the last page and read the words “and the tree was happy” without getting a little catch in the back of my throat. 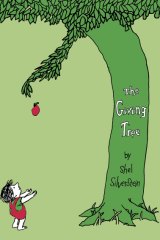 The Giving Tree has sold millions of copies.

The story is about a boy and the tree who loves him so much that it’s willing to give everything of itself – its apples, its branches, its trunk – in order to make the boy happy as he grows into an adolescent, a father, and finally an old man.

It’s only recently I discovered that the book has long been considered controversial. When Shel Silverstein tried to get a publisher back in 1964, one told him that it was simply too sad for children and another said the tree was sick and neurotic.

The book went on to sell more than nine million copies and regularly turns up on lists of the greatest children’s books of all time. But it has also been called one of the most divisive books in children’s literature, denounced as an anti-feminist patriarchal fantasy (I never envisaged the tree as either male or female) and even criticised for portraying a sadomasochistic relationship.

Like Maurice Sendak and Dr Seuss, two other iconic children’s authors who never played by the rules, Silverstein – who also wrote A Boy Named Sue for Johnny Cash and drew cartoons for Playboy – believed children shouldn’t be spoken down to.

He doesn’t hammer the point at the end, but you can tell by the look on the old man’s face in the final illustration that he regrets what he has put the tree through. Ultimately, the man gets the message of The Giving Tree. Just like my girls do.

To read more from Good Weekend magazine, visit our page at The Sydney Morning Herald, The Age and Brisbane Times.