‘The Institute’ Might Be Stephen King’s Scariest Novel Yet

THE INSTITUTE
By Stephen King

Stephen King’s protagonists have been hunted by all sorts of malevolent beings, from the demonic clown of “It” to the fiendish cowboy Randall Flagg in “The Stand.” But as scary as those supernatural bad guys can be, King’s most unsettling antagonists are human-size: the blocked writer sliding into delusions of grandeur and domestic violence, the fan possessed to the point of madness by someone else’s fiction, the bullied teenager made homicidal by the cruelty of her peers. We can see something of ourselves in these characters, and recognize in them our own capacity for evil. King’s latest novel, “The Institute,” belongs to this second category, and is as consummately honed and enthralling as the very best of his work. It has no ghosts, no vampires, no metamorphosing diabolical entities or invaders from other dimensions intent on tormenting innocent children. Innocent children are tormented in “The Institute,” but the people who do it are much like you and me.

The novel opens with Tim Jamieson, an ex-cop (he was forced to resign from the Sarasota, Fla., police department after an episode he describes as a “Rube Goldberg” bungle) wandering north to South Carolina, hitchhiking and working odd jobs until he lands in DuPray, a podunk railway depot town with shuttered storefronts and a rundown motel. He takes a gig as a sort of semi-official night patrolman and finds he rather likes the place. That’s the last we’ll hear from him for quite a while, but these first 40 pages of “The Institute” — low-key and relaxed, an unaffected and genially convincing depiction of a certain uncelebrated walk of life — demonstrate how engaging King’s fiction can be even without an underlying low whine of dread.

[ This book was one of our most anticipated titles of September. See the full list. ]

“The Institute” then turns to Luke Ellis, a Minneapolis 12-year-old with an extraordinary brain. Extraordinary in an ordinary way, that is, except for a very minor telekinetic ability. Luke is brilliant. He reads books “the way free-range cows graze, moving on to wherever the grass is greenest,” devouring the work of William James, the A.A. Big Book and everything Cormac McCarthy has written. But he’s also a kid who watches “SpongeBob SquarePants,” has pals and plays basketball with moderate skill. And occasionally, when he’s really excited, Luke might cause an empty pizza pan to skate off a table without touching it. Just as Luke’s mom and dad are getting used to the idea of moving to Boston so that he can take classes at both M.I.T. and Emerson College, a strike team of mysterious operatives breaks into the Ellis home, drugging and abducting Luke and executing his parents. 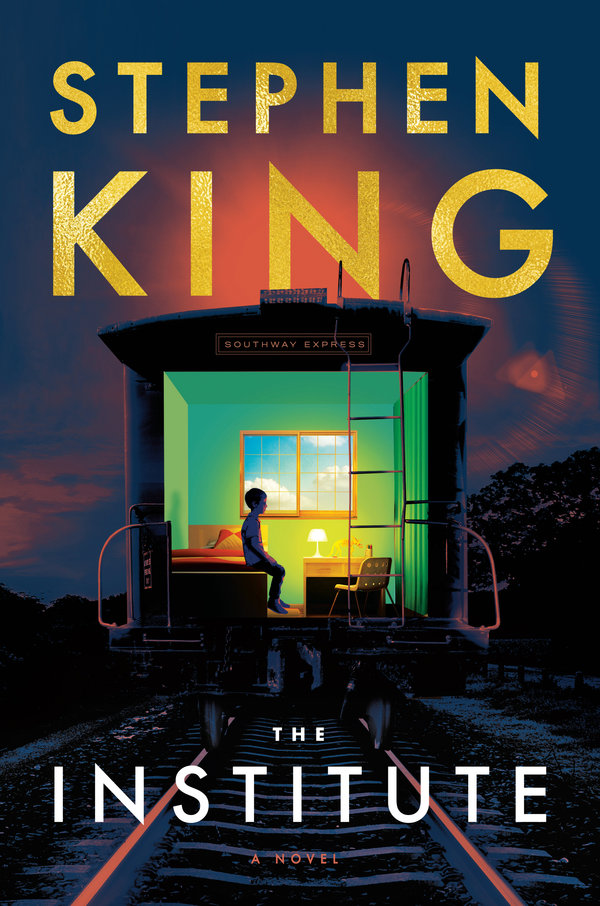 Luke wakes up in a room decorated like his bedroom back home, but with a door that opens onto a corridor decorated with posters of romping children emblazoned with mottos like “JUST ANOTHER DAY IN PARADISE” and “I CHOOSE TO BE HAPPY!” This is the Institute, and a paradise it is not. He meets a girl named Kalisha who gives him the lay of the land and introduces him to the other inmates, all kids. The adults who run the Institute subject the children — all of whom have telekinetic abilities — to unexplained experiments ranging from the innocuous to the uncomfortable to the existentially terrifying: injections; flickering lights; blood samples; MRIs; and, worst of all, dunkings to the verge of drowning in a tank of water. If the kids comply, they get tokens good for treats from vending machines that offer snacks, booze and even cigarettes. If they resist, they’re beaten or tased. After a few weeks, most of them will be transferred to the Back Half, a part of the Institute shrouded in rumor. No kid ever comes back from the Back Half.

[ Life is imitating Stephen King’s art, and that scares him. ]

The children imprisoned in the Institute learn to navigate its rules and personalities, try to figure out the purpose of it all, wonder if the authorities’ promises that they’ll eventually be returned to their families with their memories wiped can be trusted. It’s a familiar species of narrative reminiscent of countless rehab memoirs and novels about mental hospitals, “One Flew Over the Cuckoo’s Nest” in particular. Those posters in the hallways with their rictus-grin adages conjure an even more disturbing parallel, one that King will allude to repeatedly in “The Institute”: the slogan “Work Will Set You Free,” mounted over the gates of Auschwitz. The children in the Institute aren’t dumb, but they’re still children. They want to believe they’ll go home again, even though they’re pretty sure they won’t.

How do you maintain your dignity and your humanity in an environment designed to strip you of both? That theme, such an urgent one in literature from the 20th century onward, falls well within King’s usual purview. His heroes are often humble or apparently weak: children, working-class stiffs, abused women, the poor, the disabled and the overlooked — people who must summon the courage to fight back against seemingly impossible odds. “The Institute” follows this pattern, but it has some additional fish to fry. Almost as much of the novel is devoted to the staff of the Institute: Mrs. Sigsby, the fanatical director; the security chief, Trevor Stackhouse; assorted doctors, assistants and janitors; and one cleaning lady who, in secret, becomes the children’s only adult ally. From these passages we learn that the people who work in the Institute tell themselves that whatever they’re doing serves a higher good. “Nothing less than the fate of the world was in their hands,” Mrs. Sigsby thinks, “as it had been in the hands of those who had come before them. Not just the survival of the human race, but the survival of the planet. … No one who fully grasped the Institute’s work could regard it as monstrous.”

How does a human being become someone who can regard the abuse of children as, first, a necessary evil, and then, finally, as a matter of routine? That’s a question with undeniable political relevance at this moment. King has made his contempt for the current president, his administration and his policies abundantly clear on Twitter and in other public statements. “The Institute,” which takes more than one overt dig at Trump, ruminates on the people who carry out the administration’s policies on the ground, the sort of working folk he usually champions. Looking at the woman charged with shepherding the children to their dreadful appointments, Luke “realized he wasn’t a child at all to her. She had made some crucial separation in her mind. He was a test subject. You made it do what you wanted, and if it didn’t, you administered what the psychologists called negative reinforcement. And when the tests were over? You went down to the break room for coffee and Danish and talked about your own kids (who were real kids) or bitched about politics, sports, whatever.”

Gradually, but not too gradually, the exact details of the Institute’s mission come into focus. The children are viewed by the staff and the shadowy bosses that Mrs. Sigsby reports to as resources rather than as “undesirables,” like the children of migrants and other demonized minorities. But the self-deadening required to see the children that way is linked by the Institute’s sole repentant employee to the desensitization that made her able to work in “black houses” in Afghanistan and Iraq, where “enhanced interrogations” were performed. People like her are resources, too, a means to an end for those in charge. Of all the cosmic menaces that King’s heroes have battled, this slow creep into inhumanity may be the most terrifying yet because it is all too real.

Laura Miller is a books and culture columnist for Slate.