Home » Books » They Are Also 2 Wild and Crazy Guys

They Are Also 2 Wild and Crazy Guys

Most nights, from the witching hours of 2 a.m. to 4 a.m., Steve Martin finds himself awake, his thoughts spinning. He lies in bed and imagines absurd scenarios: a family of cows sitting down to a fancy dinner; a duck carrying a rifle; a washed-up Tarzan pitching reverse mortgages on television.

He jots the ideas down on his iPhone and turns the best ones into cartoons.

Martin — a comedian, actor, writer, producer and Grammy Award-winning bluegrass banjo player — is one of the entertainment world’s most overachieving multi-hyphenates. He has written essays, a memoir, novels, plays, screenplays, stand-up monologues, songs, sketch comedy and short fiction. But cartoons, which he calls “comedy’s last frontier,” were among the few comic mediums that eluded him, in part because he lacks an essential skill.

“I can’t draw,” he said. “I’m one of the few artists where the paper becomes less valuable when I draw on it.” 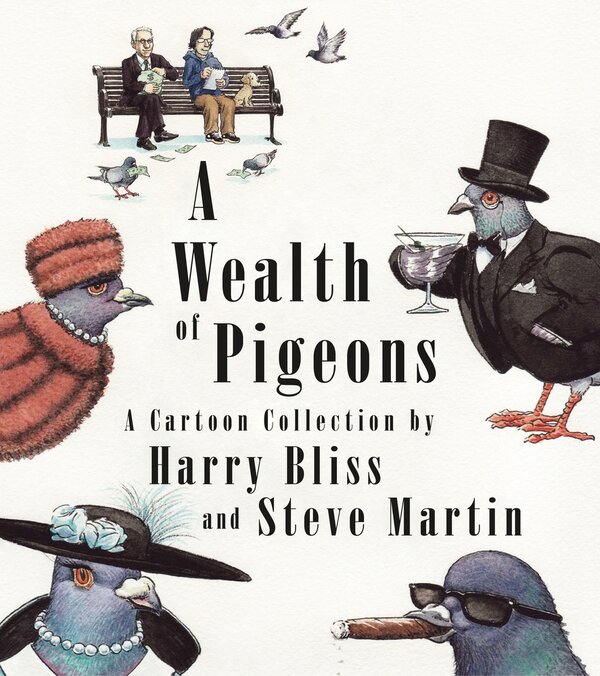 As an aspiring cartoonist with no artistic ability, Martin was in a tough spot. So last year, he contacted the illustrator and cartoonist Harry Bliss and asked if he wanted to work together.

Bliss was interested. Over the next six months, they created around 200 cartoons, many of which appear in their new collection, “A Wealth of Pigeons,” which Celadon Books will release on Nov. 17.

The comics vary in style and tone, from absurd, silly and whimsical cartoons featuring talking animals and bored aliens, to more meta, philosophical ones about the creative process and the elusive, subjective nature of comedy.

One cartoon shows an astronaut planting a flag on Mars, thinking, “I just hope this doesn’t define me.” Another shows a scowling woman with her suitcases heading out the front door, as a swamp monster looks at her sadly and asks, “Is it the slime?” In another, two moles stare at a mountain in the distance, and one says, “It started out as a molehill, but then I just kept going.”

The medium’s constraints appealed to Martin. “What I like about them is they’re so tight and they’re so clean,” he said. “It works or it doesn’t.”

For Martin, writing punch lines for cartoons was trickier, in a way, than delivering a joke in front of an audience.

“You don’t get to try them out. A joke onstage, you will go out and try it and it will work or it won’t, and then you add something to it, but you have feedback,” he said. “Here, there’s virtually no feedback.”

During a joint video interview, Martin and Bliss described their collaboration and how they build on each other’s ideas.

“The feeling of success is really interesting when you just land on it,” Martin said. “It’s almost like, I don’t know how to describe it, it’s a little pop and you go, ‘Oh yeah, that’s an idea.’”

“Yeah, I guess so,” Martin said, sounding skeptical. “Except it’s less than that. They found gold.”

Sometimes, Martin sends Bliss a description of an image, with a caption he has in mind, and they workshop it a bit over email.

Bliss ran with it. “Might be funny with a NY stylish mother standing and saying this to another adult friend (on her left), but she’s holding the hand of a tiny, bald, Jackson Pollock with his signature black T-shirt and cigarette?” he replied.

“I LOVE the cigarette,” Martin responded.

Other times, Bliss sent Martin an image in need of a caption. In one, a dog hides behind a tree, speaking into a walkie-talkie and hatching a plot to kidnap a squirrel.

Martin sent Bliss some options, including: “This is badger, come in centipede,” “This is cowboy, come in sidewinder” and “This is Roulette, come in Yahtzee.” “Eventually, they landed on a variation: “This is Blackjack, come in, Yahtzee.”

Occasionally, when Bliss can’t visualize exactly what Martin has in mind, he has asked him for a rough sketch. When Martin had an idea for a cartoon that debunks the myth of Sisyphus, Bliss couldn’t quite picture it, so Martin sent him some stick figures, with lines like, “Real Name Manny.”

As collaborators, Martin and Bliss have a sort of odd-couple dynamic. “He’s a country boy, and I’m a city boy,” Martin said.

Bliss, 56, who publishes his cartoons and illustrations in The New Yorker and in a syndicated single-panel comic that runs in newspapers, is a nature lover who lives in Cornish, N.H. (in J.D. Salinger’s former home). On Instagram, Bliss posts images of birds and trees and videos of himself chopping wood and microdosing LSD, along with glimpses of his work in progress.

Martin, 75, is best known for his comic turns in films like “Father of the Bride” and “The Jerk,” and for his stand-up and sketch comedy. He’s also an art and literature lover who has made a career detour toward writing books, with his memoir, “Born Standing Up,” his novella “Shopgirl,” and his novels “An Object of Beauty” and “The Pleasure of My Company.”

“You can see how respectful the collaboration is. It’s not Harry drawing Steve’s ideas, or Steve captioning Harry’s cartoons,” said Françoise Mouly, the art editor of The New Yorker, who helped connect Martin with Bliss. “It’s two guys trying to make each other laugh.”

Martin has written comics before, in secret. Years ago, he used to ghostwrite punch lines and comic scenarios for a cartoonist, who published some of their creations, in The New Yorker. Martin never took credit for the cartoons, and he declined to name the cartoonist, who died five years ago. “I’d rather keep it a secret because it was private between me and him,” he said.

He missed working on cartoons and felt like he had little to lose at this stage of his career by giving it a try in public, as half of a cartoonist team.

“Early on, writing had a lot of pressure and a lot of consequences, and now it’s a very different thing. This is actually really fun,” Martin said. “Earlier in life, everything’s riding on everything. Now, there’s nobody saying, “It’s not a good move.”

For Bliss, who normally works alone, collaborating with a famous comedian was a daunting prospect at first. But Martin put him at ease by assuring him that he would defer to the comedic logic of the medium.

“One of the things early on that Steve emailed me was that he has no ego about capitulating to serve the cartoon,” Bliss said in a follow-up phone interview. “To say ‘No, this doesn’t work’ to Steve Martin is a hard thing to wrap my brain around. It’s not that it’s not funny in most cases, it’s that his idea doesn’t translate to the form.”

“A Wealth of Pigeons” includes some self-referential comic strips that show Bliss and Martin at work. In one, they fight over whether or not a cartoon is funny, with Bliss telling Martin, “You’re no Charlie Chaplin” and Martin countering, “And you’re no Rembrandt.” In another, Martin throws out suggestions that Bliss blithely shoots down as derivative.

Bliss and Martin are currently working on a second book together. On a recent rainy afternoon, as they took a car together from a TV interview to promote the book, they came up with three or four cartoon ideas while they were driving. One grew out of a conversation they were having about bicycles. Martin wondered aloud why it took so long for humans to invent the wheel.

“We both agreed that there are so many examples of the wheel in nature, it should have been invented right off the bat,” Bliss said. “Steve goes, ‘OK, caption: “the invention of fire,” and people are celebrating by burning a wagon wheel.’”

Bliss sent him a sketch a few days later.