Home » Books » They’re Not Lost in the Woods, They’re Thriving

They’re Not Lost in the Woods, They’re Thriving Are humans, in a state of nature, good or evil? It’s one of the great beefs in philosophy. I’m sure I’m oversimplifying here, but the gist is this: Thomas Hobbes believed that human beings are naturally ferocious, competitive killers; Jean-Jacques Rousseau believed that we are born gentle, chill and kind. Civilization, Rousseau argued, is what transformed us into the nasty, stressed, would-be dominators we’ve been for the last several thousand years. Had we stayed in the wilderness, we’d be a happier and more decent species.

Andrew J. Graff’s engrossing, largehearted debut novel, “Raft of Stars,” is a book with a distinctly Rousseauian vibe. It is the story of what happens when two 10-year-old boys flee into the northern Wisconsin woods and how they, and their various adult pursuers, don’t merely survive, but shed their landlocked inhibitions and become better, bigger versions of themselves.

It’s the 1990s in the “equally dear and disappointing” town of Claypot, Wis., population 1,999. Claypot’s new sheriff, Cal, a transplant from Houston, arrives on the scene of what appears to be a murder — a man lying on the floor, motionless, bleeding from a gunshot wound to his head. The man’s son, Bread, and his friend, Fish, who pulled the trigger, leave a note for Fish’s grandfather, Teddy, admitting to the act. They pilfer some survival goods from Teddy’s garage — a barlow knife, a flint, some canned food — and bolt for the forest. Soon, the hapless Cal and the resourceful, determined Teddy hop on horses in pursuit of the boys. Shortly after that, Fish’s mother, Miranda, and Cal’s love interest, Tiffany, a gas station attendant with purple hair, join forces and head after the boys, too.

The characters in “Raft of Stars,” especially the men, enter the woods broken and numbed, exiles in their own bodies. Bread, a survivor of constant physical abuse at the hands of his father, is now wracked with guilt because his prayers — for his father to die — have seemingly been met. Fish is still reeling from the absence of his father, a soldier who died in the gulf war. Teddy fought in the Korean War, an experience that has left him “quiet” ever since. Cal, a “bleeding heart,” is haunted by his traumatic experiences on the job in Houston and has turned to the bottle. 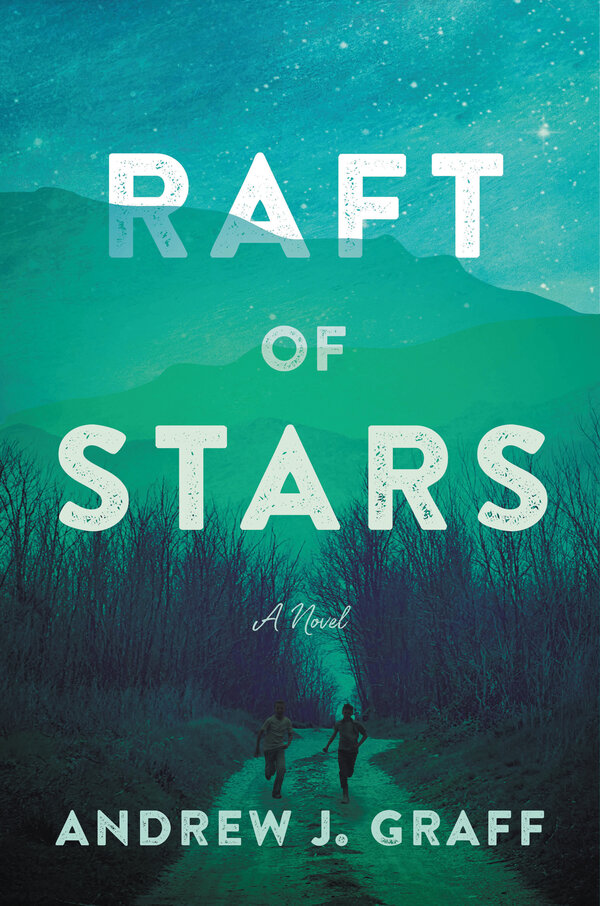 Graff, who is a veteran of the war in Afghanistan, depicts his battle-scarred heroes with knowing generosity. In spare and unpretentious prose, he shows how their hard lives have left them wary and emotionally knotted. Fish learns early on “not to cry in front of boys at school. It was good not to cry. It was also awful.”

But the wilderness softens them. Despite brushes with danger and death — roaring rapids, charging bears, loaded rifles, hunger — they don’t turn inward, nor do they turn against one another. No one goes “Lord of the Flies.” Instead, they do what they haven’t felt free to do in civilization: open up and cry, reveal their regrets and fears and needs.

At one point, Cal indulges in a previously unimaginable thought: defying his father and leaving his “man’s job” in law enforcement. “The admission was terrifying, but hopeful, too,” Cal thinks. “He could actually quit this.”

It is moments of quiet liberation like this — not the rapid-fire action sequences, of which there are many — that quickened my pulse most.

Some may find the optimism in these pages a little old-fashioned. There’s plenty of evidence that we are living in a Hobbesian hellscape of treachery and despair, and much of today’s literature, dutifully, reflects that. But, as Ralph Ellison wrote of the great Rousseauian escape fantasy “Huckleberry Finn,” a novel can also offer a fictional vision of “transcendent truths and possibilities such as those discovered when Mark Twain set Huck and Jim afloat.” A novel, Ellison believed, could “be fashioned as a raft of hope.”