Home » Books » This Much Is True – Miriam Margolye: The most invigoratingly outspoken memoirs I’ve read

This Much Is True – Miriam Margolye: The most invigoratingly outspoken memoirs I’ve read 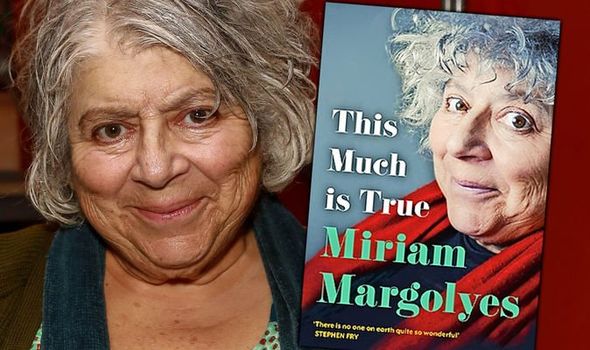 It’s one of the most invigoratingly outspoken memoirs I’ve read.

She comes across as a woman with an enormous, compassionate heart but she’s frank, she’s fearless and if she feels someone has behaved badly, she’ll say so, invariably using four-letter words.

Margolyes was born 80 years ago to a doctor and an aspirational mother who got her daughter into a prestigious private school. Cambridge followed where she joined “toxic” Footlights and, as an opinionated woman, was frozen out by John Cleese, Graham Chapman and Bill Oddie, “total sh**s” all.

Having worked in showbiz for 50 years, this star of stage and screen has met everyone who’s anyone.

Though a proud lesbian, she says “the best kiss I think I’ve ever had” was with Bob Monkhouse on BBC TV play Enter Solly Gold. In contrast, Terry Scott of Terry And June fame “was the nastiest person I’ve ever worked with”.

In the 80s, Margolyes became the country’s top-earning female voiceover artist, recording voices for adverts such as PG Tips, with their chimpanzee stars.

Despite a period of success in Hollywood, she is resigned to being best known for playing Professor Sprout in the Harry Potter films – though she has never read the books or seen the films and she doesn’t like children.

In fact, she swears so compulsively and liberally that, on the Harry Potter set, she had to put 10p into a swear jar every time she swore, raising “an appreciable sum” for the World Wildlife Fund.

Farting features heavily, such as when she and Graham Norton were queuing backstage for a meet-and-greet with Dolly Parton and Miriam’s wind “exploded gloriously with… a gigantic boom”, so much so that Graham “trembled and nearly fell”. Perhaps this is partly explained by the fact she enjoys snacking on raw onions.

There are also gloriously shocking stories of her losing her temper, from getting arrested after telling a police officer “You’ve got a d**k that small!”, to pouring water over a young man who refused to give up his seat at a train station.

Still, for all the energetic name dropping, the person who means the most is Heather, her partner of 53 years.

Margolyes’ story is fast paced, reading like it was dictated at speed, and captures her force-ofnature personality.

It’s a whistlestop tour through five decades of acting success. Buckle up, you’re in for a wild ride.