Home » Books » This Time, He Stars In His Own Story

This Time, He Stars In His Own Story A year or so ago, Gabriel Byrne was putting the final touches on his memoir, “Walking With Ghosts,” a series of snapshots from his early life in Ireland and beyond, when he struck an errant key on his laptop.

“It was kind of devastating,” Byrne said in a video interview last month. “I went to the store where they have the geniuses” — that would be Apple, with its Genius Bar — “and I said, ‘I want your most genius Genius.’ And he said, ‘Unless you can get some kind of spy agency involved in this, it’s gone and we have no idea where it is.’”

Luckily, Byrne found the book had more or less lodged itself into his unconscious, and he was able to resurrect it, writing in cafes, this time with an iPad and liberal use of the “save” function. Written as if its author were “an intruder in my own past,” as Byrne put it, “Walking With Ghosts” is being published by Grove Press on Tuesday. The writer Colum McCann calls it “a book that will wring out our tired hearts.”

Now 70 and with a long and growing list of television, movie and stage credits to his name, Byrne has spent most of the pandemic at his house on a hill in Rockport, Maine, with his wife, Hannah Beth King, a documentary filmmaker, and their young daughter. (He has two older children with his first wife, the actor Ellen Barkin, and also has an apartment in Manhattan.) Rockport is the sort of place, he said, where no one much cares what he does for work.

In emotional, evocative prose, “Walking With Ghosts” describes the town outside Dublin where he grew up, the oldest of six children crammed into a small house, their father working as a barrel-maker for the Guinness brewery, everyone in each other’s business. They were steeped in Catholicism, part of a system that was really about “the deconstruction of oneself,” Byrne said.

In passages that are horrifying, then funny, then both, he describes, for instance, learning the story of Adam and Eve from a fire-and-brimstone nun, in a lesson that ends with God declaring to the fallen pair: “And by the way, your children will be miserable as well.” (“That’s why the world is such an unhappy place,” the nun adds.) 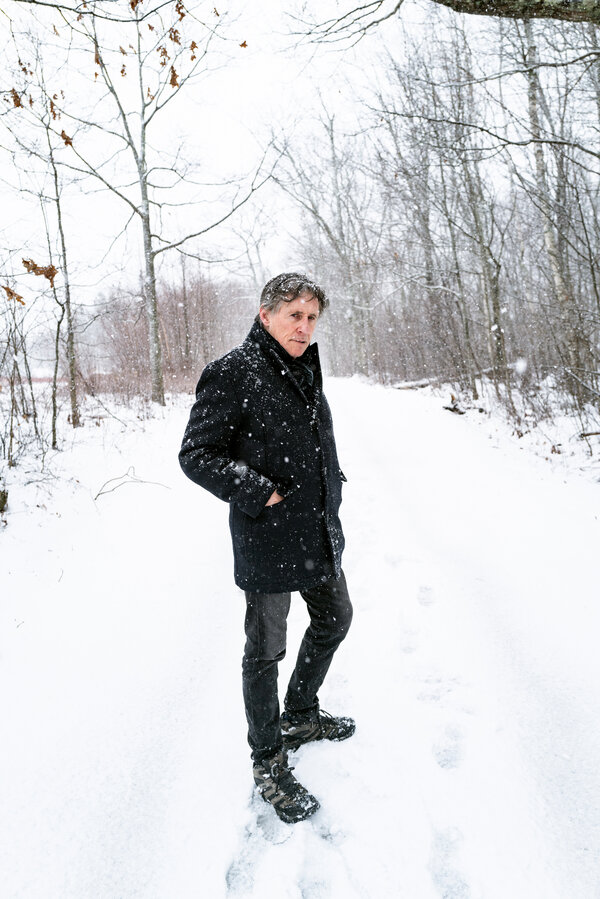 Byrne writes of his youthful decision to become a priest, convinced he had a calling, of how he left Ireland at the age of 11 to enroll in a Catholic seminary in England. (His stoical father barely said goodbye, but when Gabriel forgot something and went back into the house, he heard his father weeping behind the closed kitchen door.) He describes how he was sexually abused by the priest who had seemingly treated him with the most kindness, and how he then left the seminary and renounced his faith.

In a particularly harrowing scene, Byrne telephones the priest many decades later, determined to instigate a confrontation. But the priest claims to have no idea who he is, and the effort fizzles out.

The priest died many years ago, and Byrne said he has come to terms with the story’s lack of a neat ending. “We love to think there’s a resolution to these things, that that’s how to deal with trauma — ‘I confronted him; I dealt with it; I moved on,’” he said. “But that’s not necessarily true. I realized that there doesn’t have to be a resolution.”

Back home in Ireland, his road to acting was hardly inevitable. He took refuge in movies and books and worked, mostly unsuccessfully, at a series of odd jobs — restaurant dishwasher, plumber, laborer, petty criminal, door-to-door salesman — before going to college and joining an amateur acting group that set him off on a different trajectory altogether.

Byrne did not intend to write a celebrity memoir, the kind bubbling with frothy anecdotes about Brad Pitt and Benicio Del Toro, though he has worked with both men. When he does write about his career, it is mostly to recall moments of incongruity — like the drunken bender he went on after the explosive reception to “The Usual Suspects” in Cannes — when he has felt uneasy with success.

He said he wanted the book to explore memory and identity, issues complicated for him by being so long gone from Ireland.

“The moment you leave the country, your relationship with it changes,” Byrne said. “For me, it’s always been a conflicted relationship. I’ve always missed the country, the people, the landscape, the humor, the shared references, the fact that you don’t have to explain yourself.”

In the back of his mind as he began writing, he said, were A.E. Housman’s “A Shropshire Lad,” with its “blue remembered hills,” and William Wordsworth’s “Tintern Abbey,” which couples nostalgia with the harsh reality that the past is irrevocably gone.

Byrne recalls his mother, a reciter of poetry and old Victorian songs, a lover of language, a dispenser of the Irish folk wisdom known in Gaelic as “Seanfhocail,” a woman consumed by housework and child-rearing. Before she died, Byrne asked her about her life and used their conversations to help bring her, and what he called “her secret life of longing and yearning,” alive in his writing.

Elisabeth Schmitz, the vice president and editorial director at Grove Atlantic, said she had been attracted to the memoir by Byrne’s singular voice, and by the fact that he behaved not like a movie star, but like a writer. She recalled their first meeting, for breakfast in a Soho hotel. She brought him a stack of books, and it turned out he had already read most of them.

“I showed up with the manuscript, and I’d written all over it, and I thought he would sit there and go through it page by page,” she said. “But he just wanted to talk about books.”

Anyone who has watched Byrne act — performing Eugene O’Neill on Broadway, starring in movies, appearing on television as a therapist in the HBO series “In Treatment” and, more recently, in the BBC’s adaptation of H.G. Wells’s “War of the Worlds” — would imagine him to be a contemplative person, prone to periods of darkness, and it turns out that he is. He writes of suffering from depression, and how in the past it was connected to his drinking.

He was a champion drinker. It made him confident; it made him sociable; it took “the eternal dullness of my days,” he writes, and filled them with color. “Alcohol had become my most trusted friend, before it betrayed me and brought me to my darkest days.” He finally sought help after waking up one morning covered in blood, an eye swollen shut and a tooth missing, a woman he had no recollection of in bed beside him. “I can’t go on dying like this,” he told a friend.

Byrne has been sober for nearly a quarter-century, and is as proud of that as he is of anything. Alcohol was “about escaping the present, escaping the gray reality of life, about being somewhere else,” he said. “But now I use my imagination for that.”

He is next to appear in “Death of a Ladies’ Man,” a film inspired by the Leonard Cohen album of the same name, in which he plays an aging professor painfully reckoning with his past. “The War of the Worlds,” in which he co-stars with Elizabeth McGovern, has finished filming its second season, after a Covid-precautions-filled shoot in Wales and England. And he is working on a new book, a novel this time, on the themes of immigration and exile.

Can you go home again? That is the tantalizing question raised by “Walking With Ghosts.” But when he last visited the town of his childhood, Byrne found that it looked completely different. And when he stopped by his old house, peering through a crack in the door, he found that it was altered, too. The world he remembered no longer existed.