Home » Books » Thomas Harris returns after 13 years, but no sign of Hannibal Lecter

Thomas Harris returns after 13 years, but no sign of Hannibal Lecter

Thomas Harris, the creator of one of literature’s most terrifying monsters, arguably has one of the darkest imaginations of any writer working today. His infamous serial killer, Hannibal Lecter, devours his victims' organs after delicately preparing them and once ate a man alive, serving slices of his brain with truffles and capers.

So it’s somewhat unnerving to hear Harris insist that he doesn’t invent anything.

"I don’t think I’ve ever made up anything," he tells me as we drive across Miami’s 79th Street Causeway, which takes us past a small island called Bird Key where a climactic scene in his new novel, Cari Mora, takes place. "Everything has happened. Nothing’s made up. You don’t have to make anything up in this world." 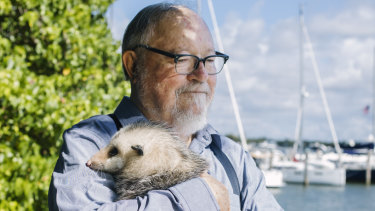 Thomas Harris is a regular helper at a wildlife sanctuary near his home in Miami.Credit:Rose Marie Cromwell/ New York Times

Harris, 78, repeats this idea, or a variation of it, nearly every time I ask him about the origins of a plot point or a character, and it occurs to me that his answer is scarier than anything I could have anticipated. It’s not that Harris has a particularly gruesome imagination, it’s that he’s a keen observer and a chronicler of people and their darkest impulses.

For nearly 45 years, Harris has terrified audiences with his grisly novels, which have sold more than 50 million copies. He introduced one of the most memorable fictional villains of all time, but relatively little is known about Harris or his creative process. He doesn’t do book signings or author appearances. He hasn’t given a substantive interview since the mid-1970s because he prefers to let his work speak for itself, he says. 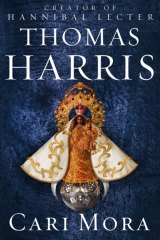 Over the decades, his silence has only fuelled public fascination with the elusive man behind the monster. Perhaps the most surprising thing about Cari Mora, his first book in 13 years, is that Harris is willing to talk about it at all.

Cari Mora marks a major departure for Harris. For the first time since his 1975 debut book, Black Sunday, he’s written a novel that doesn’t feature Hannibal Lecter. It’s the first time that Harris has written extensively about Miami, his adopted home for the past 30 years, giving him a chance to explore the plight of immigrants and refugees, a subject that has been weighing on him.

The novel’s protagonist, Cari Mora, is a Colombian refugee who works as the caretaker of a Miami Beach mansion that once belonged to drug lord Pablo Escobar. Cari lives with constant dread that immigration officials will revoke her temporary protected status, and she finds herself caught between two rival criminal networks that are vying for rumoured riches buried under the mansion.

"The Hannibal character still occurs to me, and I wonder sometimes what it’s up to. But I wanted to deal with Miami, and the people here and the struggle here, and the aspirations that I see in the new people that come here," Harris says. "You see such a hunger for a different life."

Harris and I met on a bright, muggy morning in the parking lot of the Pelican Harbor Seabird Station, an animal rescue centre on Biscayne Bay that features prominently in his new novel. Cari works there as a volunteer, caring for injured birds.

Harris, a nature lover, has been visiting the centre regularly for 20 years. He’s brought orphaned squirrels and an injured ibis there, and he took a wildlife rehabilitation workshop, learning how to intubate a distressed animal by practising on a dead possum. "Everyone else got a bird," he says.

The fact that Harris, a conjurer of psychopaths and serial killers, has a soft spot for ailing animals might seem incongruous to those who only know him through his work, but it wouldn’t surprise anyone who’s met him. Harris is deeply private, but he’s not a recluse in the mould of J.D. Salinger or Thomas Pynchon. When he’s not writing, he draws, cooks elaborate meals and has dinner with friends. He often sits outside at his bayfront Miami Beach property, where he keeps track of the ibises, possums, iguanas and the occasional dolphin or manatee.

Despite his aversion to interviews, Harris is a gracious and impeccably mannered host. He comes across as a bookish introvert, quoting F. Scott Fitzgerald, Horace, Socrates, Pablo Neruda, Ezra Pound and William Carlos Williams during our conversation.

But in public, Harris exhibits a watchfulness that borders on wariness. Fame, he says, "is more of a nuisance than anything else".

Harris describes writing as an almost passive process, something that happens to him rather than something he does. His novels start with a scene that plays in his head, then he tries to figure out what came before, and what came after. He talks about his characters as if they exist in the world, leading parallel lives independent from his books.

The work can be painfully slow. Decades have passed between some of his novels.

"Sometimes you really have to shove and grunt and sweat," Harris says. "Some days you go to your office and you’re the only one who shows up, none of the characters show up, and you sit there by yourself, feeling like an idiot. And some days everybody shows up ready to work. You have to show up at your office every day. If an idea comes by, you want to be there to get it in."

He quotes a line from Gustave Flaubert: "Language is like a cracked kettle on which we beat out tunes for bears to dance to, while all the time we long to move the stars to pity."

Harris grew up in a small community in Mississippi, where his family owned a cotton, soybean and wheat farm near the Coldwater River. "My companions when I was a small child were mostly turkeys," he says. 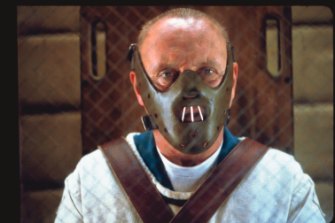 Anthony Hopkins as Thomas Harris’ most famous creation, Hannibal Lecter, in the film version of The Silence of the Lambs.Credit:

He majored in English at Baylor University and worked as a reporter in Waco, Texas. Magazine assignments took him to northern Mexico, where he met a prison doctor who later became an inspiration for Hannibal Lecter.

In 1968, he got a job at The Associated Press in New York, covering robberies, murders and riots. While there, he and two other reporters outlined the plot for Black Sunday, a novel about a terrorist scheme to attack the Super Bowl. (They split the advance, and Harris wrote the story.)

Harris wrote his second novel, Red Dragon, which introduced Hannibal, when he was caring for his ailing father in Mississippi. Stephen King compared the book to The Godfather and later called Hannibal "the great fictional monster of our time". Harris has described feeling unnerved by his charismatic villain. He once wrote that he was "not comfortable in the presence of Dr. Lecter, not sure at all that the doctor could not see me".

But from then on, Harris couldn’t escape his creation.

Hannibal became an unlikely pop-culture phenomenon with Harris’ 1988 novel, The Silence of the Lambs, about an FBI trainee named Clarice Starling who visits Hannibal in prison and seeks his advice as she tracks a serial killer. The novel sold millions of copies and was made into a 1991 film starring Jodie Foster and Anthony Hopkins, which won five Academy Awards.

But as the franchise grew, fans began to tire of the cannibal. Hannibal Rising was a commercial and critical disappointment. Producer Dino De Laurentiis, who adapted Hannibal Rising, told Entertainment Weekly that Harris hadn’t been interested in a prequel and only agreed after De Laurentiis told Harris that he owned the character rights and that he would get someone else if Harris said no.

Readers’ enthusiasm, however, started to dissipate. In 2006, Harris’ publisher ordered a first printing of 1.5 million copies for Hannibal Rising, but the novel only sold about 300,000 hardcover copies.

Some critics panned the book as a crass attempt to squeeze more material out of a fading franchise and noted that Harris’ once supple dialogue seemed stiff and affected. (Harris says that’s because he wrote some of the exchanges between Hannibal and his aunt, Lady Murasaki, in the poetic style of the Heian period, as an homage to the 11th-century Japanese novel The Tale of Genji. The allusion was apparently lost on some readers.)

Harris wouldn’t rule out writing more books about Hannibal but said it was a relief to get some distance from him. "I was making room for something else," Harris says.

Over the years, journalists and biographers have floated various theories as to why Harris stopped speaking publicly about his work. One widespread myth is that prying reporters kept trying to figure out where his twisted ideas came from, and Harris bristled at the implication that he harboured psychopathic tendencies.

This conjecture isn’t quite true, he says. He stopped giving interviews because he didn’t like or need them. Acquaintances do sometimes ask how he dreams up such lurid stories. When I asked how he replies, Harris stared at me as if the answer should be obvious.

"I respond that I don’t make anything up. So look around you," he says. "Because everything has happened."

Cari Mora is published by William Heinemann at $32.99.