Tony Wilson: How ‘Mr Manchester’ reinvented the city he loved 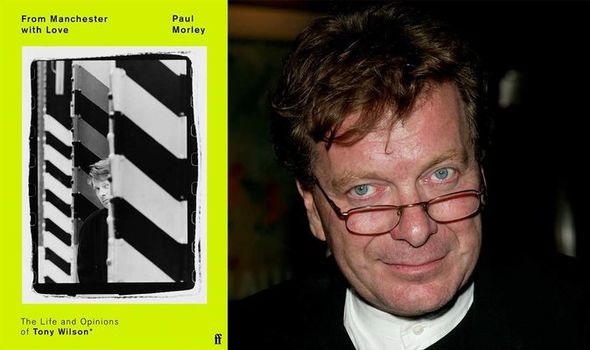 The spirit of Manchester is inextricably linked with its music scene these days. Megastar bands like Happy Mondays, Oasis, New Order, The Stone Roses and Joy Division made the city synonymous with an endless stream of hits.

When the “Madchester” scene of the 1990s was at its peak, it centred on the famously hip nightclub The Hacienda. It helped kick-start Manchester’s rebirth as a confident, modern city, the home of boutique hotels and a thriving centre.

And at the heart of it all was a visionary who helped Manchester out of a post-war slumber into becoming a cutting edge cultural hub.

Tony Wilson started the Hacienda with his label Factory Records’ standout stars, New Order. He was a TV presenter as well, working with future daytime TV stars and Express columnists Richard Madeley and Judy Finnegan at Granada, while also persuading Manchester politicians to have bigger ambitions for the city. Alan Partridge star Steve Coogan played Wilson in Factory biopic 24 Hour Party People – only for the man himself to joke to the film’s director Michael Winterbottom that Coogan’s portrayal wasn’t nasty enough.

Now the influence of Wilson, who was dubbed “Mr Manchester”, is chronicled in a fascinating new biography, From Manchester With Love, by acclaimed northern broadcaster and writer Paul Morley.

“Tony’s broadcasting background gave him a very good ability at taking something that might seem niche and turning it into something bigger with a good soundbite,” explains Paul.

“He had a crisp way of presenting complicated information. Sometimes, just by saying something was happening, Tony would make it happen. With The Hacienda, Tony would create its slogans and logos as part of being ‘Mr Manchester’.”

After reading English at Cambridge University, and writing scripts for News At Ten in the early 1970s, Wilson moved back to Manchester to become a reporter for local ITV show Granada Reports. He subsequently started Factory Records with a £10,000 bequest from his mother Doris.

Factory’s first successful signing were cult rockers Joy Division, whose success was cruelly cut short when singer Ian Curtis died by suicide in 1980. Paul, then a reporter for music magazine NME, was taken to see Ian’s body at the chapel of rest by Wilson.

“I couldn’t quite process what was happening,” recalls Paul. “Tony could see I was in shock. As if it explained everything, Tony said, ‘Paul, you will be writing a book about these moments. Therefore, you need to see things and be the witness’. Initially, these statements seemed completely far-fetched. Pop culture wasn’t taken seriously in 1980. Telling me, ‘This will be history’, seemed ludicrous. But Tony was right.”

Joy Division were named after an area of concentration camps in Nazi Germany. Richard Madeley recalls how he argued with Wilson that the band should change their name, telling the record company boss: “I think it’s a mistake, morally, because we all know what the name refers to.”

Richard told the author: “We had a good old argument. And I remember Tony saying, ‘OK, you’re right. But I’m right as well and that’s where we’re going to have to leave it.’ That was Tony.” That certainty – often even bloody-mindedness – was key to Wilson’s ambition. He wanted the best for Manchester, working with local politicians to make it happen.

Paul, 64, explains: “Tony was interested in popular culture’s impact on a city. In his view, why shouldn’t it be the poets, dreamers and musicians who can create what a city is, as much as its politicians and bureaucrats? It was important that Factory was bigger than just a record label and the artists on Factory be more than just successful musicians. There was something bigger going on.”

He continues: “Tony was a lover of great cities. He wanted the best of those cities for Manchester. His attitude was, ‘Why shouldn’t Manchester have everything that New York, Berlin and Chicago do?’ He wanted a cocktail bar, so he started the very successful Dry Bar. He wanted international conferences in Manchester, so he formed one, In The City.

The Hacienda was created as the kind of club you’d see in New York.

“Without Tony, Manchester would be a very different place. It wouldn’t be bursting with skyscrapers, boutique hotels and loft apartments.Tony was one of the first successful people to live in Manchester’s city centre, as he believed people should live there to create the energy of a city.”

But the success of The Hacienda was partly by accident. The club opened in 1982, funded by Factory and New Order, formed by the surviving members of Joy Division under a new name with guitarist Bernard Sumner replacing Ian Curtis as singer.

The club didn’t take off until the mid ’80s, when resident Hacienda DJ Mike Pickering became one of the first people to play rave music in England. “Tony didn’t really like dance music,” admits Paul. “He was slow at first to understand what was happening at The Hacienda. But, once he did, he was quick to turn it into a newsworthy scene.”

Wilson’s ability to be a success as a TV host, record company boss and political motivator made him an early influencer, according to Paul. He explains: “When Tony died, it needed 40 different people to be as important as one Tony Wilson.There are new Tonys now. A lot of people have a lot of different jobs that, at their core, are broadcasting their own identity. Tony was like that, in speaking to camera, endlessly distributing thoughts and ideas. He set that template for influencers. In the music industry now, the equivalent would be Kanye West or Jay-Z.”

While the Madchester scene became the centre of youth culture, at its worst the Hacienda was beset by gangs fighting over the drugs trade. Meanwhile, Happy Mondays – by now one of Factory’s most important acts – burned through money recording their littleloved fourth album Yes Please!, fuelled by singer Shaun Ryder’s drug addiction. In 1992, Factory went bankrupt. Paul insists: “Tony’s contribution to Manchester is that it has arts centres and hotels, things Tony set in motion. He saw value in other ways, encouraging people together.”

Paul says: “Both portrayals are true, but they’re just a small fragment of what Tony was. He was both bulls****er and philosopher. Tony was frustrated by 24 Hour Party People. He knew he had a trivial side, but he took it all seriously. His temper, arrogance and bossiness were an important part of him, so if he was going to be a figure of fun, he wanted that side in the film too.”

Wilson was married twice and was with his long-term partner, former Miss England Yvette Livesey, for 17 years until his death from cancer aged 57 in 2007.

His own upbringing was complicated. His mother Doris was 46 when Wilson was born in (ironically, Salford) in 1950 via a then-rare emergency C-section. His father Sydney was secretly gay, coming out shortly after Doris’s death. “Tony had a fear he’d never settle down,” explains Paul. “Because he came from an unsettled background, he’d get incredibly agitated in trying to create settled circumstances, finding a wife and family. But he’d get bored very quickly. He had so many interests, he was always moving on. It was the same with relationships and friendships.”

Typical of his largerthan-life character is his claim he altered his name from Tony Wilson to Anthony H Wilson because Pope John Paul II told him “Tony” was “too trivial” and he should honour Saint Anthony instead.

“That story is true because Tony said it was true,” laughs Paul. “Tony was so many different characters. He was the first person to make me think I could become a broadcaster, to believe in me. He had so much confidence, he could afford to give it to others.

It was a confidence Wilson gave Manchester, too. Paul says: “While the local council was battling Barnsley for a bigger shopping centre, Tony would tell them, ‘Why don’t you try and compete with Sydney for the Olympics instead?’ It’s that attitude that means there’s still an intrigue as to who, why and what Tony Wilson was.”