If I’m a boat person, thinks the narrator of Viet Thanh Nguyen’s “The Committed,” so were the English Pilgrims who came to America on the Mayflower.

The Pilgrims were lucky in their public relations, he continues. There were no video cameras to capture them, thin, dazed and lice-ridden, stumbling in the surf. Instead, romantic painters glorified them in oils.

“The Committed” is a sequel to Nguyen’s Pulitzer Prize-winning novel “The Sympathizer” (2015). The books share a narrator, a Communist spy, half-Vietnamese and half-French, who refers to himself as “a man of two faces and two minds.”

This new novel is set in the early 1980s, as the man of two faces flees not to America but to France. He’s survived a harrowing boat trip, and a flight from Jakarta with Bon, his “best friend and blood brother.” Their story is complicated to unwind.

In “The Sympathizer,” the narrator had gone undercover as a refugee in Southern California after the fall of Saigon. On a mission back to Vietnam, he was captured. Both he and Bon have been traumatized by time spent in a re-education camp run by their other blood brother, Man.

Bon has a gladiatorial disposition. There’s dramatic irony in the fact that he does not know Man was his Torquemada.

History really comes at these men. You’ll remember them, if you read “The Sympathizer,” but if you haven’t it’s not necessary; Nguyen neatly brings you up to speed.

The first 100 pages of “The Committed” are, to my mind, better than anything in the first novel. The narrator’s voice snaps you up. It’s direct, vain, cranky and slashing — a voice of outraged intelligence. It’s among the more memorable in recent American literature. 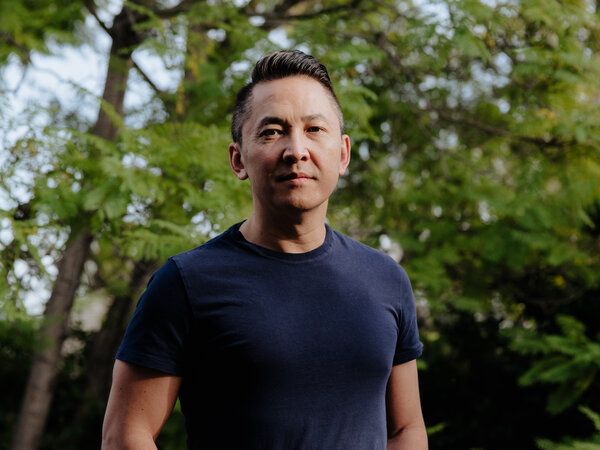 The man of two minds attended a lycée in Saigon, where he’d wander the streets with a French book under his arm and be racially abused by the local French “in the language of Dumas, or Stendhal, or Balzac.”

The heat in “The Committed,” of which there is a good deal, derives from the friction created by the narrator’s contradictory thoughts about France, his country’s colonizer. This is a book about humiliation, about repression and expression, about the plasticity of identity. It searches for a heterogeneous ideal, not a homogeneous one.

Even those Vietnamese who despise the French have been seduced by them, Nguyen writes. They’ve been “shaped by their hand and touched by their tongue.” The very word colonialism “sounded better when dubbed la mission civilisatrice.” The narrator is contemptuous of French gentility but attracted to it as well.

Nguyen’s narrator is a sophisticated tour guide into what he calls “the heart of whiteness.” French intellectuals love jazz, he writes, “partially because every sweet note reminded them of American racism, which conveniently let them forget their own racism.” This book subtly draws upon the mythic power France once held for Black Americans.

Nguyen riffs on what he calls the “dialectical baguette.” The Vietnamese improve the French bread by fashioning it into bahn mi. The Vietnamese pound their cognac, in macho fashion, while the French prefer to sip. Vietnam, in terms of its past with the French and the Americans, comes to seem like a strip of land passed over annually by hurricanes.

The author dispenses aperçus: “Even among the unwanted there were unwanted”; “Ah, contradiction! The perpetual body odor of humanity!”; “Colonization is pedophilia”; “My entire life is a self-criticism session.” One bad guy considers himself “Baudelaire with a baseball bat.”

Nguyen was born in Vietnam and raised in America. His sentences, as they heat, expand. He lets them run riot. Some cover multiple pages, building to towering peaks. When these arias work, they’re ecstatic. When they don’t, one recalls Capote on Kerouac: “That’s not writing, that’s typing.”

The overwriting in this novel only rarely bothered me. More often I was reminded of George Balanchine’s comment that if his dancers didn’t occasionally fall onstage, they weren’t really going for it, and of John Coltrane’s emotionally overblown notes in “A Love Supreme.”

The second half of this book is shaggy, shaggy, shaggy. If it’s not a total breakdown, it’s something close. The man of two minds becomes a drug dealer. Thanks to the French Vietnamese woman he calls his aunt, who works in publishing, he has access to left-wing French intellectuals, who have a strong taste for his products. Infecting France with Eastern drugs is his own tidy form of payback.

This is a bookish novel. It’s the kind in which a bouncer at a brothel reads Voltaire. The introduction of these French intellectuals, as well as the narrator’s own reading, allows him to brood over the revolutionary ideas of Frantz Fanon, Aimé Césaire, Marx, Sartre and others. In these writings, the running dogs of capitalism are walked on long intellectual leashes.

Tragedy and comedy blend awkwardly in this novel’s second half. Nguyen can be very funny. Overhearing his “aunt” have sex, for example, he’s pretty sure she cries out “GOOAAAAALLLLLL!”

The narrator becomes involved in gangland violence. Gangster films, Morris Dickstein reminded us, are immigrant fables. Nguyen appears to take to heart Robert Warshow’s comment that if the gangster film tells us anything, it is that it’s dangerous to be alone.

Nguyen consigns his characters to a series of frazzled, far-fetched scenarios. Mayhem feeds mayhem. There are several extended torture scenes in the back half of this book that don’t work at all. (“You can’t torture me,” the narrator says, in error. “I’ve lived through a re-education camp.”)

Nguyen doesn’t find a tone for these scenes. They’re awful in their way — there are rubber hoses and electrodes clamped onto nipples — but they’re hard to take seriously. There’s a daft James Bond quality to them. The torturers fritter their time away, long enough for the tortured to be rescued. Doors are kicked open with a bang; guns blaze. You sense the author trying to keep the plot frantically spinning, rather than elegantly extending his themes.

Men and women of two minds are not so rare. “The test of a first-rate intelligence,” as F. Scott Fitzgerald told us in “The Crack-Up,” “is the ability to hold two opposed ideas in the mind at the same time, and still retain the ability to function.”

Nguyen’s narrator matters because of his author’s intelligence and his incendiary, crazy-legged style. This novel doesn’t hold together, but it’s more serious and more entertaining than nine-tenths of the novels that do. Its narrator wants redress for the wrongs of history, but he also wants to live in the imperative tense.

As you can tell, I’m of two minds about “The Committed.” I’ll put my feelings this way, borrowing something the English writer Jonathan Coe said about “Fedora,” Billy Wilder’s penultimate film: “Flawed and bonkers, but I like it.”